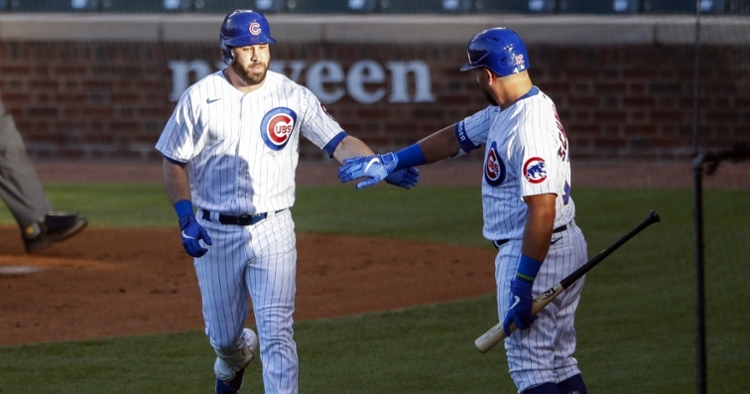 CHICAGO — Making their long-awaited, subdued return to the baseball diamond, the Chicago Cubs kicked off a three-game "Summer Camp" stint on Sunday night. The North Siders battled the South Siders at a relatively empty Wrigley Field, with the Chicago White Sox using a six-run fifth inning to win 7-3.

Due to COVID-19 restrictions, no fans were in attendance, which is going to be an unfortunate reality of most, if not all, of the 2020 slate. The first of back-to-back exhibitions between the Cubs and the White Sox saw a decent performance from Cubs starter Kyle Hendricks spoiled by a dismal outing from Jharel Cotton, a reliever signed by the Cubs in the offseason.

Conversely, Jason Kipnis made a positive splash in his summertime Cubs debut, with the veteran serving as the designated hitter and homering in his first at-bat. All big league games will feature a designated hitter batting for both teams this year, and Kipnis, a veteran who was recently added to the Cubs'40-man roster, made it well-known that he could see some plenty of at-bats out of that position when he went yard in the bottom of the first. The Cubs took a 2-0 lead two innings in, but the White Sox outscored the Cubs 7-1 the rest of the way.

The new guys are fitting in just fine. pic.twitter.com/b8UpMN2DiR

T1: Hendricks quickly worked through the lineup to kick off the exhibition, giving up just one baserunner.

B1: In his first at-bat as a member of the Cubs' 40-man roster, Kipnis jacked a 426-foot bomb to straightaway center field. The solo shot put the North Siders up 1-0.

T2: Hendricks notched a strikeout and issued a walk in a scoreless inning.

B2: White Sox starter Drew Anderson gave up his second run of the night. Cubs catcher Willson Contreras hustled for an infield single to lead it off, and right fielder Jason Heyward followed that up with a walk. A few plate appearances later, second baseman Nico Hoerner, playing in his first full season as a major leaguer, lined out for a sacrifice fly that plated Contreras.

T3: Javier Baez coughed up a grounder at shortstop, but the White Sox, who tallied two baserunners, failed to score in the inning.

B3: The Cubbies were shut down in order by Anderson, who was pulled in between innings.

T4: Luis Robert of the White Sox attempted to steal second with two outs, but Contreras gunned him down from behind the plate. Baez applied a smooth tag to seal the deal.

u live u learn pic.twitter.com/MrUqwlET37

B4: Ross Detwiler relieved Anderson, and the Cubs went three up, three down. Detwiler struck out the first two batters he faced.

T5: White Sox outfielder Adam Engel smashed a solo dinger out to left, putting the South Siders on the board. Later, with runners on the corners, Hendricks headed for the dugout. Cotton entered with two outs and proceeded to struggle mightily, giving up four consecutive extra-base hits before finally ending the inning. A two-run double by Yasmani Grandal was followed by back-to-back one-run doubles off the bats of Edwin Encarnacion and Robert. Avisail Garcia capped off the barrage with an RBI triple, placing the White Sox ahead 6-2.

B5: Detwiler continued to shine, notching three outs in four at-bats. Hoerner came up with a base knock.

T6: Cotton fared much better his next time out, working a scoreless sixth. A two-out walk was all that the White Sox managed.

B6: Jimmy Lambert pitched for the White Sox, and the Cubs were unable to reach base.

T7: Rex Brothers pitched for the Cubs, and a wild pitch from Brothers enabled a run to score with two outs.

B7: A two-out single from Victor Caratini was the lone highlight of the bottom half of the seventh.

T8: Brothers and Dan Winkler, both newcomers to the Cubs' bullpen, combined to throw a scoreless eighth.

B8: The Cubs drew three consecutive walks, and a nubber from David Bote scored a run with two outs. Following a pitching change, utility man Hernan Perez, another Cubs newbie, flied out to end the inning and leave the bases juiced.

T9: Brad Wieck relieved Winkler after the first out and held the White Sox in check after giving up a walk.

B9: Codi Heuer toed the rubber and finished off the Cubs in short order.

Up Next: The "Windy City" rivals will battle again on Monday, July 20. The second exhibition of Summer Camp will shift to Guaranteed Rate Field on the South Side and is scheduled to begin at 7:10 p.m. CDT.