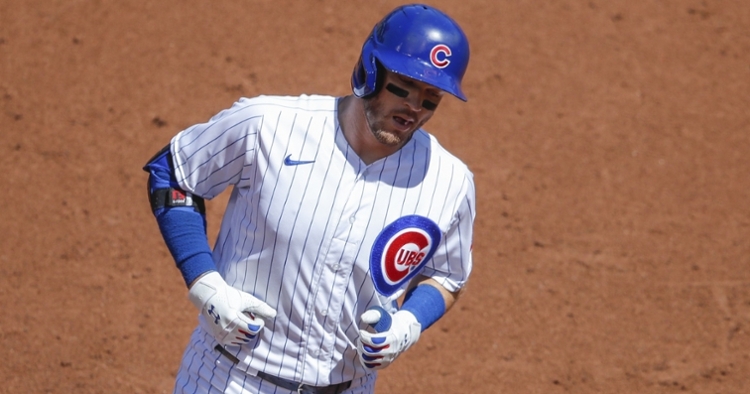 CHICAGO — Taking part in their second doubleheader in three days, the Chicago Cubs (15-8) and the St. Louis Cardinals (6-6) faced off at Wrigley Field on Wednesday. Game one saw the Cards blow the Cubbies out in a 9-3 romp. Over the course of the seven-inning contest, Chicago was limited to just two hits, a solo home run by Ian Happ in the first inning and a relatively meaningless two-run dinger by Josh Phegley in the ninth frame.

Neither starting pitcher lasted very long on the mound, with the Cubs' Alec Mills exiting after 3 2/3 innings of six-run ball and the Cardinals' Jack Flaherty getting pulled after tossing a meager 1 2/3 innings of one-run ball. The Redbirds took a 4-0 lead in the top of the first and never looked back, boasting a lead for the remainder of the game.

T1: Mills was dreadful out of the gate, hitting the leadoff man and giving up a single and a walk to set the stage for notorious Cub killer Matt Carpenter to go yard. Carpenter's grand slam sailed 410 feet out to center field. Mills then walked Brad Miller and balked soon afterward. Miller was left stranded, though.

B1: In the Cubs' first at-bat of the game, Ian Happ swatted a homer over the right field wall. The 390-footer, Happ's sixth of the year, marked the third leadoff blast of the series for Happ. Flaherty outed the next three batters, recording two strikeouts.

B2: Flaherty walked two batters and hit another to load the bases before being yanked with two outs. Austin Gomber replaced him and struck out Happ to end the inning.

T3: A questionable decision not to challenge a call at second base likely resulted in the Cardinals failing to add to their lead. Miller led off with a line drive hit into the gap between right and center, but Javier Baez tagged Miller out after receiving a throw from Happ. Replays indicated that Miller avoided Baez's glove while sliding into the bag, but the Cardinals did not challenge the out call. Tyler O'Neill followed that with a double that could have potentially plated Miller. The Cardinals failed to score in the inning.

Nothing to see here. ?? pic.twitter.com/DjFHzp52gs

B3: Wong started off the bottom of the third by making a superb diving stop of a worm burner hit by Anthony Rizzo. Later, with two outs, Gomber hit a batter and walked a pair of batters to load the bases. However, for the second straight inning, the Cubs failed to take advantage of a bases-loaded opportunity that they were gifted, as Jason Kipnis grounded out.

B4: Tyler Webb pitched a three up, three down fourth for the Redbirds.

T5: Underwood sat the Cardinals down in order his next time out.

B5: Webb and John Gant combined to keep the Cubs off the bases in the fifth.

T6: The Cubs made a slew of defensive changes between innings. Dylan Carlson reached base on an infield single and swiped second. Underwood was taken out after walking Wong. Jason Adam entered to pitch and gave up an RBI single to Edman and a two-run double to Miller.

B6: Gant and Ricardo Sanchez toed the rubber in a scoreless bottom of the sixth.

T7: Adam worked through the seventh, issuing a two-out walk before tabbing an inning-ending strikeout.

B7: With Sanchez pitching, Happ drew a one-out walk, and David Bote then hustled to avoid grounding into a double play. Following Bote's fielder's choice, Phegley collected not only his first home run as a Cub but his first hit as a Cub. The 382-footer to left was followed by a game-ending groundout.

Alec Mills dropped to 2-2 with the loss, and Webb was credited with the win, making him 1-1.

Josh Phegley is on the board, a 2-run blast, his first HR of the season! pic.twitter.com/NwG7sHsvun

Up Next: The second installment of the doubleheader and the finale of the five-game series will begin at approximately 5 p.m. CDT. Adbert Alzolay (0-0, 0.00) will make his season debut on the mound for the Cubs. The right-hander is slated to pitch against fellow promising prospect Johan Oviedo (0-0, 0.00). The St. Louis righty will be making his big league debut on a pleasant evening at the Friendly Confines. Just like the nightcap of Monday's doubleheader, the Cubs will serve as the de facto road team and bat first.

The #Cubs drop the first game of a doubleheader to the Cardinals.