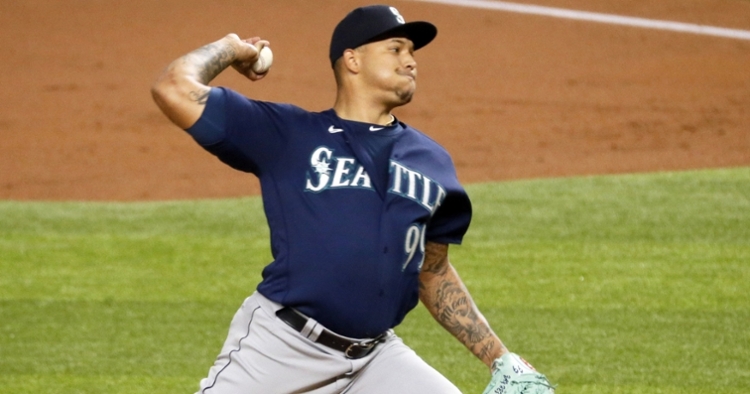 All offseason long, we have discussed the Cubs' needs as an organization and what they need to do if they want to be competitive. After losing Jose Quintana, Tyler Chatwood, and Jon Lester this past offseason, starting pitching was an area that needed to be addressed.

Trading away Yu Darvish made things worse, but at least they got a starter in Zach Davies in return, but this team still had openings in the rotation to fill. Trevor Williams and Shelby Miller have been added in recent weeks, but do you trust either of them to make 30 starts this season. It is nice to see the Cubs adding at least some recognizable names to fill openings on this roster, but Jed Hoyer still feels he can add to this team, especially in the rotation.

Guys like Rick Porcello and James Paxton are still available on the market, but at this point, I don't see either of them landing in Chicago, especially when you look at their asking prices. What options does that leave this Cubs team? Well, Taijuan Walker is still out there looking for work, and according to ESPN and multiple reports, Walker is the perfect match for this Cubs team.

Considered one of the 10 best free agents left to sign, Walker was once a top prospect in the Mariners system before getting sent to Arizona. At that time, his career took a turn for the worse as injuries started to pile up, eventually setting him back multiple seasons. Throughout his 108 games as a pro, 105 starts, Walker has been up and down, going 35-34 with a 3.84 ERA. However, the good news for Cubs fans is looking at what he did last season, and it appears Walker could be healthy once again.

Refusing to give up, Walker returned to Seattle last season, before landing in Toronto to finish the year. Talk about a tale of two seasons. In five starts with the franchise that called him up, Walker went 2-2 with a 4.00 ERA. Following his trade to Toronto, Walker made six starts with the Blue Jays, going 2-1 with an impressive 1.37 ERA. For the season, Walker went 4-3 with a career-best 2.70 ERA 19BB and 50K.

Could that be just an anomaly given the short season, maybe, but Walker looked much better last season than he has in the past? His fastball was back in the 93-95 range after sitting in the '80s before 2019 spring training. Walker not only appears to be healthy for the first time in years but seems to have figured something out since leaving Seattle.

Seeing Walker and his name attached to the Cubs shouldn't come as too much of a surprise as the Cubs worked him out last spring before spring training. Following that workout, Walker decided between joining the Cubs or returning to Seattle on a one-year deal. He ultimately chose Seattle and is now a free agent once again.

Chicago tends to go after pitchers who are recovering from Tommy John, which is precisely what Walker has done. However, as we continue to see, pitchers who often have Tommy John tend to come back better and stronger than before, so there is that to consider. Coming off the season he had is certainly getting him much more consideration than in seasons past.

Despite that great year, his swing and miss rate was very low (the 13th percentile), for that matter, but the Blue Jays liked what they saw from him, and he delivered. In terms of the teams interested in his service, the Cubs are not alone as the Phillies, Blue Jays, Giants, Red Sox, and Cardinals discuss Walker.

Toronto has raved about Walker's work ethic, and they loved what they saw from him last season. They are rumored to be pushing for Paxton right now, but should they not get him, Walker is next on their list. Philadelphia, meanwhile, just signed Matt Moore, but Walker could still fit with that organization. The way I see things right now, the Cubs truly are the best fit for Walker at this point.

With a rotation that features Kyle Hendricks, Zach Davies, Alec Mills, Adbert Alzolay, and most likely Williams and or Miller Walker would immediately come in with an opportunity to battle for the fifth spot. Not only could he win that job, but he could push a guy like Mills to the bullpen, where I think he could be more valuable as a Mike Montgomery type of pitcher.

The Cubs rotation is a far cry from what it once was, but projections like what Hendricks and Davies have done as they could be better than advertised. After trading for Nolan Arenado, the Cardinals appear to be the favorites in the central, but the Cubs are not far behind. Getting Walker into the mix will help this rotation and put Cubs back in the driver seat as division favorites.