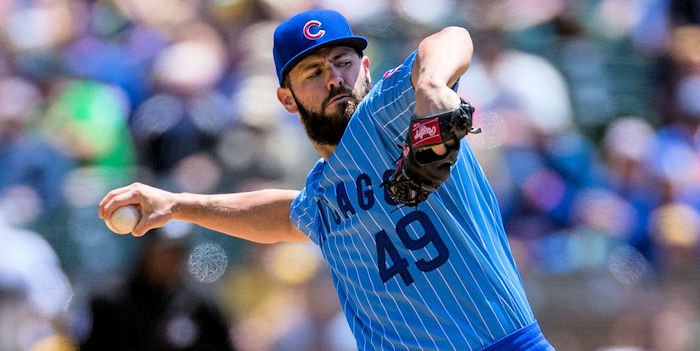 The Cubs and A's wore throwback uniforms from 1981 as Chicago blanked Oakland 4-0 on Saturday as the Cubs have won six-straight wins, have won their sixth series out of seven since the All-Star break, and have the major league's best record at 68-41.

Cubs second baseman Ben Zobrist singled up the middle on a line drive with two outs to score Willson Contreras and Dexter Fowler to put the Cubs up 2-0.

Addison Russell had a RBI single to score Anthony Rizzo in the top of the sixth inning for his 66th RBI of the season. Jorge Soler comes up next and smacks a double past the third baseman to make it a comfortable 4-0 lead for the Cubs.

Cubs ace Jake Arrieta pitched eight shutout frames (108 pitches) scattering only three hits with four strikeouts and a walk to record his 13th win of the season and his first win since late June. His ERA is now down to 2.59.

Before the game, Cubs ace Jake Arrieta has gone 23-5 with a 1.82 ERA in 33 starts since the beginning of last August.

Cubs reliever-outfielder Travis Wood entered the game in the ninth inning and got the last three outs of the game with a strikeout.

Cubs pitcher Kyle Hendricks (10-7, 2.22 ERA) will face lefty Sean Manaea (3-6, 4.68 ERA) and it will an opportunity for the Cubs to get a rare road sweep before an off day and then a 10-game homestand against the Angels, Cardinals, and Brewers.