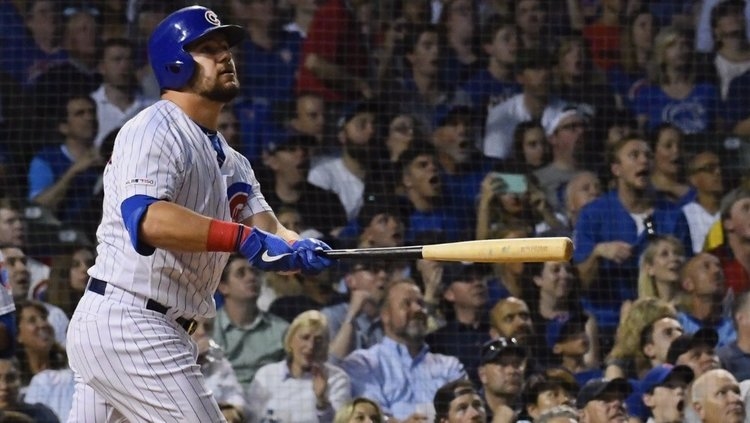 CHICAGO, Ill. — Highlighted by a solid start on the mound from Kyle Hendricks and a pair of mammoth home runs, Tuesday's Chicago Cubs (33-26) victory over the Colorado Rockies (31-28) featured an all-around stellar performance by the North Siders. Winning the opener of the 3-game series at Wrigley Field by a final score of 6-3, the Cubs were led by shortstop Javier Baez, who went 3-for-4 at the plate, and were sparked by a 2-RBI showing from former Rockies outfielder Carlos Gonzalez.

Speaking of players tallying RBI against their old clubs, erstwhile Cub Daniel Murphy, who is now the starting second baseman for the Rockies, put Colorado up 1-0 in the top of the first with a 2-out RBI single. The Rockies put together a 2-out rally off Hendricks in the first frame, with back-to-back infield singles leading to Murphy's base knock. In the next inning, Gonzalez turned the tables by registering an RBI against the team that he suited up for from 2009 to 2018. After a leadoff single by Baez, "CarGo" plated Baez and tied the game at 1-1 with a double that sailed to the warning track in center field, marking the first extra-base hit and RBI for Gonzalez in a Cubs uniform. Gonzalez went 1-for-3 on the evening.

Later in the second, Hendricks provided himself with a lead to work with when he skied a 2-out bloop single that fell in between three pursuing Rockies in shallow left-center, thereby allowing Gonzalez to come home and make the score 2-1 in favor of Chicago. Murphy took the Cubs to task again in the fourth, when he jacked a game-tying 391-foot solo shot. Murphy went 2-for-4 on the night. However, Murphy's blast was all but forgotten when Cubs left fielder Kyle Schwarber clobbered a jaw-dropping 467-foot solo dinger in the bottom of the fifth, which marked Schwarber's longest homer of the year.

Inspired by Schwarber's yard work, Baez got in on the action in the bottom of the sixth with an impressive 440-foot moonshot that flew over the wall in center field. The 2-run shot scored first baseman Anthony Rizzo and increased the Cubs' lead to three. The Rockies tacked on their last run of the night via an RBI single by Tom Wolters in the top of the seventh, but Hendricks collected two consecutive strikeouts to usher in the seventh-inning stretch soon afterward. Hendricks racked up 10 strikeouts as part of a superb 7-inning outing that earned him the winning decision.

Cubs third baseman Kris Bryant led off the bottom of the eighth with a double to left and was advanced to third on an infield single by Baez that saw "El Mago" dive headfirst into the bag at first in order to beat it out. After that, Gonzalez notched his second RBI of the contest with a sacrifice fly that brought Bryant in to score, giving the Cubs a 3-run advantage. Fresh off the injured list, Cubs closer Pedro Strop entered with a save opportunity on the line in the top of the ninth, and he delivered by sitting the Rockies down in order. As a result, Strop collected his fifth save of the season and secured the 6-3 Cubs victory.