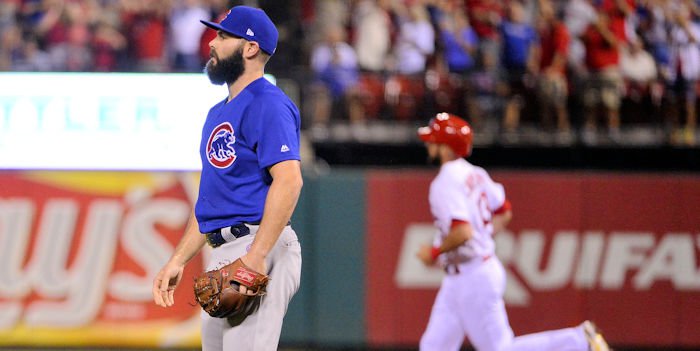 ST. LOUIS -- The Chicago Cubs are not yet popping champagne bottles as they fell to the rival Cardinals 8-7 at Busch Stadium on Tuesday night. Magic number for the North Siders remain at one game with the Brewers win tonight.

Veteran righty Jake Arrieta got off to a bumpy start in the first inning giving up a solo homer to his former TCU teammate Matt Carpenter for his 23rd home run this season. Reserve infielder Mike Freeman misplayed a ground ball that led to two more runs for the Cardinals to give them an early 3-0 lead.

The Cubs responded quickly with a one-out triple by Ian Happ and then Kyle Schwarber brought him home on a RBI groundout to make it 3-1 Cardinals in the second inning.

Tommy Pham crushed a two-run homer into the upper deck to give the Cardinals an impressive 5-1 lead in the second inning.

In the fourth inning, Tommy La Stella reached on a catcher's interference call with the bases loaded to pull the Cubs within two at 5-3. However, the Cubs had up Zobrist, Bryant, and Rizzo and didn't manage to score another run against starter Carlos Martinez.

Albert Almora Jr. was injured while crashing into the left-center wall trying to get Paul DeJong's double in the fifth inning. He slipped and stumbled as he collided with the wall and appeared to hurt his right shoulder or collarbone area. The trainer P.J. Mainville checked him over alongside Joe Maddon and a few of his teammates.

The young outfielder eventually walked off the field under his own power and headed straight to the clubhouse. In 2017, Almora is batting .297 with seven homers.

Cubs officials announced that he has a right shoulder contusion near the rotator-cuff area (bruised) and the X-rays were negative.

The Cubs day got worse as Jedd Gyorko and Randal Grichuk both hit solo homers to put the Cardinals up for good at 8-3. However, out of nowhere, a rally was started by Jason Heyward as he smoked a three-run homer to pull the Cubs within two runs at 8-6. It was his 11th homer of the season which is an improvement over last season's seven dingers.

GAME ON! Two 8th inning homers have the #Cubs right back in this thing!

Zobrist continued the rally as he pulled the Cubs within only one run with a solo shot with two outs in the eighth inning. It was his 12th homer of the season.

The Cubs had hope in the ninth inning with a walk to start the inning by catcher Willson Contreras. Ian Happ and Addison Russell struck out and then Heyward drew a two-out walk to set the scene for pinch-hitter Javy Baez.

However, Baez struck out to end the game.

Game three of the series will start Wednesday at 6:08 p.m. CT and it will feature righty John Lackey against righty Michael Wacha.