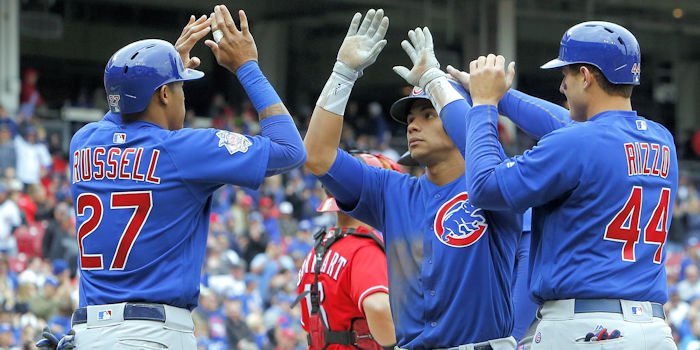 ST. LOUIS -- In need of some rejuvenation after dropping five of their last six games, the Chicago Cubs were sparked by the dynamic, and youthful, battery of pitcher Eddie Butler and catcher Willson Contreras tonight. With both youngsters achieving career milestones in the Cubs' 3-2 victory over the division rival St. Louis Cardinals at Busch Stadium on Friday, they helped pull the Cubs to within 1.5 games of the Cards in the National League Central standings.

Making his Cubs debut, Butler, who was traded to Chicago in the offseason and recently called up from the minors, pitched a gem against St. Louis, allowing only two hits in six innings of work on the mound. Appearing to be in sync with Contreras throughout his start, Butler looked the part of the youthful catalyst that could revitalize the Cubs' otherwise wizened starting rotation.

Throwing five strikeouts and consistently forcing the Cardinals to hit into grounders, Butler, who is 26 years old, pitched with all of the poise of a proven veteran. Struggling with walks and the occasional erratic pitch in the early goings of the game, Butler (1-0, 0.00) gradually got his feet under him as his start progressed and earned the win for his efforts.

The Cardinals were inept at the plate for the most part, with two infield singles, including a perfectly placed bunt, by shortstop Aledmys Diaz serving as the only offensive success for St. Louis when facing Butler. For the Cubs, on the other hand, their offense thrived by way of Contreras's bat. For the first time in his career, Contreras accrued a multi-homer game, smacking two line drive solo home runs to put the Cubs up 2-0 early. Coming in the first and fourth innings off of Cardinals starter Mike Leake, Contreras's round-trippers, one just over the wall in the right and the other just over the wall in center, proved to be just enough for the Cubs to earn a road win. In the process, it earned Leake (4-2, 1.94) a home loss.

Contreras, who finished 2-4 with two RBI and now sports a .228 batting average, was the only legitimate thorn in Leake's side. Leake, a second-year Cardinal and former member of the Cincinnati Reds who has a lot of experience pitching against the Cubs, was solid overall, giving up five hits and striking out five. Pulled after six innings, Leake was arguably yanked too soon, as his replacement, reliever Brett Cecil, gave up a dinger to Cubs second baseman Tommy La Stella in just his second at-bat to place the Cardinals into an even deeper 3-0 hole. La Stella, who collected a double off of Leake earlier in the game, went 2-4 at the dish with one walk.

On the flip side, Butler's exit seemed to be problematic for the Cubs, with reliever Carl Edwards giving up a solo shot to the second batter whom he faced in the seventh, Cardinals right fielder Randal Grichuk. His only hit of the game, Grichuk's home run made the score 3-1, and a Grichuk walk and subsequent steal in the ninth provided the Cardinals with new life. Swiping second base with two outs in the bottom of the ninth and Cubs closer Wade Davis on the mound, Grichuk was then able to score on a strange hit-and-run situation that did not involve a hit. St. Louis second baseman Kolten Wong struck out swinging with Grichuk naturally on the move with two outs and two strikes. Grichuk was able to score, though, because the third strike got behind Contreras and enabled Wong to advance to first base safely. However, the lucky break proved to be moot for the Cards, as pinch hitter, and known Cub killer, Matt Adams struck out swinging in the next at-bat to end the game. Securing his eighth save, as well as the Cubs' 3-2 triumph, Davis kept his composure when it mattered most to prevent a ninth-inning meltdown and ensure that the Cubs would earn a hard-fought win.

Butler, the Cubs' star in the making, was virtually unhittable in his Chicago premiere, becoming the first Cubs hurler to pitch six or more scoreless innings in his debut with the team since Ryan O'Malley did it in 2006. Contreras, who was equally as impressive, committed his fair share of damage against the Cardinals at the plate to aid Butler's cause. He was even incredible on the defensive end, picking off former Cubs teammate and current Cardinal Dexter Fowler at first base. Contreras's first career game with multiple home runs saw his yearly long ball total double from two to four. As for La Stella's homer, it marked the utility player's first time going yard this season.

After garnering a potentially momentous win in front of a crowd of 47,601, the third-largest attendance total at Busch Stadium this season, the Cubs (18-17) will look to continue their winning ways against the Cardinals (19-15) in Game 2 of the three-game affair tomorrow afternoon.