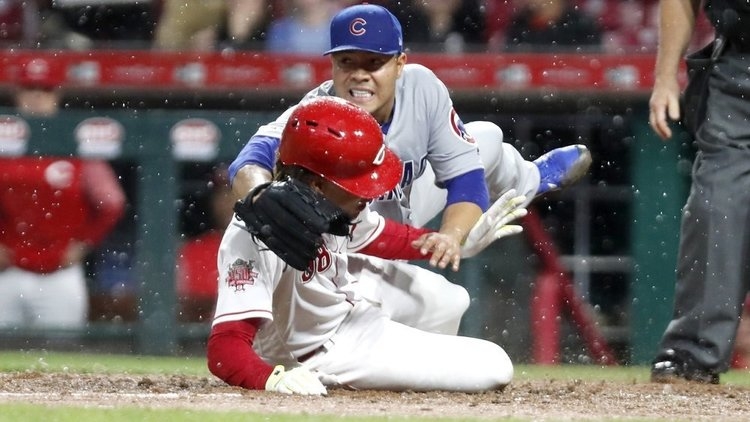 CINCINNATI, Ohio — Outside of a lucky bounce on an unorthodox 2-run double, the Chicago Cubs (25-16) did not experience much success against the Cincinnati Reds (20-24) on a rainy Thursday night in the Queen City. Wasting an early 2-run lead, the Cubs fell 4-2 in the rubber match of the 3-game set at Great American Ball Park, thereby marking the first series loss for the North Siders in over a month.

A steady drizzle fell throughout the early innings, culminating in a rain delay coming into effect in the top of the sixth and lasting for approximately an hour and a half. Prior to the delay, the Reds put together a 3-run fifth inning to take a 3-2 lead. Cubs starter Jose Quintana dominated through the first four innings but struggled in the fifth frame that ultimately resulted in him receiving the losing decision.

The Cubs went up 2-0 in the opening inning on a 2-out double by Willson Contreras. A literal base knock, the dribbler ricocheted off the third-base bag and into left field, allowing Kris Bryant and Javier Baez to score. Bryant, who has reached base in 25 consecutive games, drew a walk earlier in the inning, and Baez extended his career-high hitting streak to 14 games with a 2-out double of his own prior to Contreras collecting his. After that, Reds starter Luis Castillo was solid for the remainder of his 5 1/3 innings on the mound, earning the winning decision for his efforts.

Jose Peraza sparked the fifth-inning turnaround for the Reds with a solo home run that made the score 2-1. Following a pair of Reds singles, Quintana came unglued. The left-hander threw two wild pitches in the same at-bat, with the second one allowing the tying run to score. Eugenio Suarez then gave Cincinnati the lead with an RBI single that put the Reds up 3-2.

José Peraza gets back in the lineup and dings one out of the park to bring the @Reds within 1 to the Cubs! #BornToBaseball pic.twitter.com/gVnGffjB8A

The @Reds have grabbed the lead with a 3-run bottom of the 5th #BornToBaseball pic.twitter.com/Lrc9CeJz3s

Fresh out of the rain delay, the Cubs notched a couple of 2-out singles in the top of the sixth. With runners on the corners, Willson Contreras failed to come through with his second RBI hit of the evening, though, as he hit into an inning-ending groundout. After fielding the grounder at third base, Suarez short-armed a throw across the diamond, but Joey Votto was able to make a difficult catch off a short hop at first base to record the out.

This scoop by Joey Votto is a thing of beauty!#BornToBaseball pic.twitter.com/xzYCC3C7gx

Chicago reliever Tyler Chatwood struggled on the mound in the seventh. He gave up three straight singles to start the bottom half of the inning, including another RBI single by Suarez. From there, the Cubs went six up, six down to secure their 4-2 loss, as the Reds took two of three in the series.