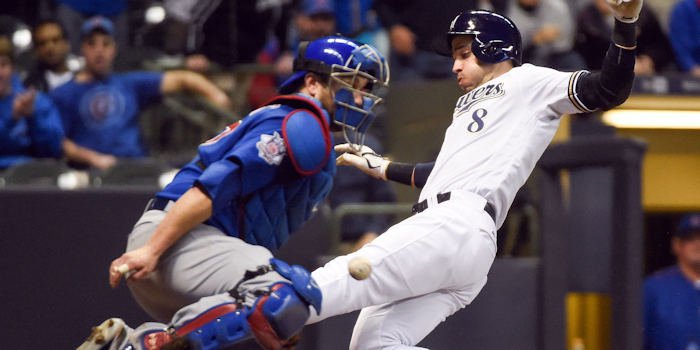 MILWAUKEE -- The Chicago Cubs (27-10) lost their second straight game on Tuesday night, falling to the Milwaukee Brewers (17-22) at Miller Park by a final margin of 4-2. The final score is deceptive, as the Cubs only accrued three hits on the night, two of which were back to back solo home runs in the top of the ninth.

Brewers starter Chase Anderson pitched a gem, nearly throwing a complete game one-hitter. However, he was pulled after giving up the two long balls in the ninth. Closer Jeremy Jeffress made quick work of sealing the deal, though, striking out Cubs first baseman Anthony Rizzo soon after entering the game.

Anderson had a no-hitter going through seven, but it was nullified when Chicago second baseman Ben Zobrist led off the eighth with a double to deep center field. Coming into the outing, Anderson was a lowly 1-5 on the year, his first with the Brewers, so his elite pitching tonight against perhaps the best offensive team in baseball came as a bit of a surprise. Now 2-5 for the season, Anderson might be in the process of becoming a key stave in the barrel that is the Brewers rotation.

Cubs starter Kyle Hendricks was not his usual self on the night, giving up four runs in 5.1 innings pitched. Dropping to 2-3 on the year, Hendricks fell apart in the bottom of the sixth. The first run of the game was scored via a home run by Milwaukee catcher Jonathan Lucroy in the bottom of the fourth. As for the bottom of the sixth, Hendricks allowed the first three Milwaukee batters to reach base, and the third left fielder Ryan Braun, drove in a run on a single to right. Braun and second baseman Scooter Gennett scored the very next at-bat, with first baseman Chris Carter bringing them home on a booming double to deep right.

Thus marked the end of the Cubs’ misery, as middle reliever Trevor Cahill entered the game and forced two outs. Cahill remained on the mound for the remainder of the game, not giving up a hit or a walk. Surprisingly, the Brewers only garnered five hits on the night, making the most of them with four runs scored.

Cubs outfielders Jason Heyward and Kris Bryant hit consecutive homers in the top of the ninth, respectively, but there were already two outs. Therefore, the Rizzo strikeout brought an end to a strange game, quite possibly the worst of the season for the Cubs, hitting-wise.

Following a 2-1 loss to the Pittsburgh Pirates on Sunday and an off day on Monday, one would have expected the Cubs to rebound at the plate on Tuesday. But Anderson proved to be too much for the Cubs, striking out six batters and only giving up three hits.

Entering the game, the Cubs had won seven straight at Miller Park, dating back to last July, but the Brewers ended that streak in dominant fashion to open up the three-game series. John Lackey, who has pitched wonderfully lately, will be on the hill for the Cubs tomorrow night when he faces off against Jimmy Nelson of the Brewers. The Brewers will look to gain more ground on the National League Central-leading Cubs, and Chicago will look to put an end to its offensive woes.