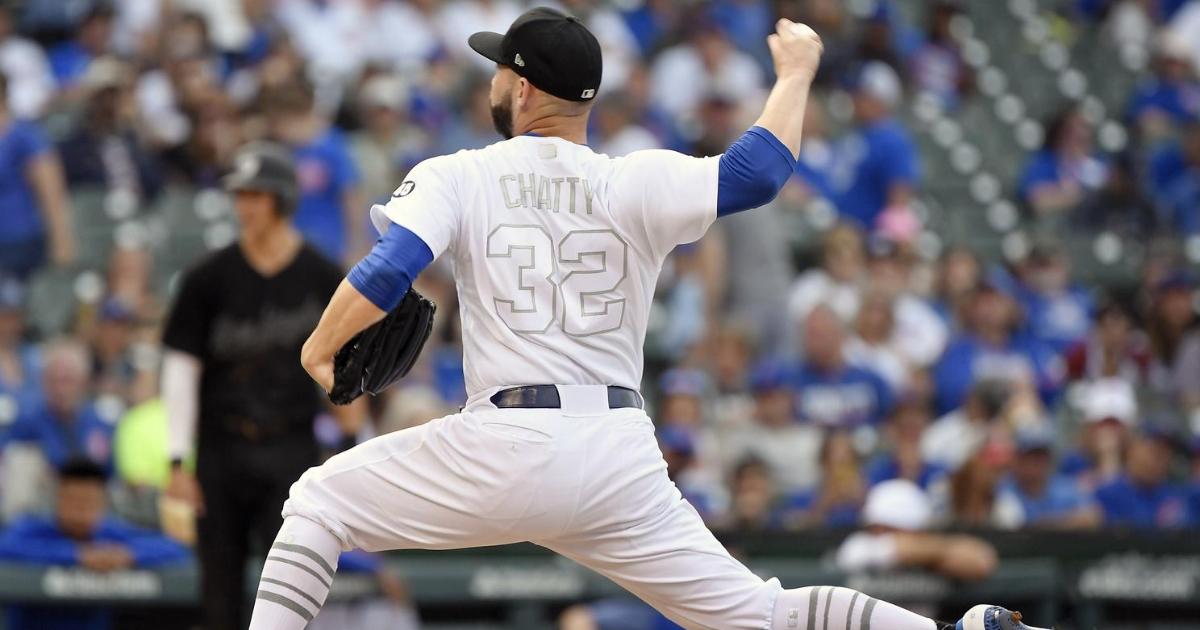 CHICAGO — Suffering their first home sweep of the season, the Chicago Cubs (69-61) fell to the Washington Nationals (73-57) in extra innings on Sunday. Despite coming alive at the plate late in the contest, the Cubs went six up, six down in extras and lost 7-5 in 11 innings. The Nationals squandered a 5-2 lead that they boasted during the seventh-inning stretch, but they plated two runs off Cubs reliever Tyler Chatwood in the top of the 11th and accomplished what no other team has done this year by sweeping the Cubs at Wrigley Field.

Heading into 2019 MLB Players' Weekend, the Cubs had dropped only one home series all season and had yet to be swept at the Friendly Confines. However, the red-hot Nationals outhit the Cubs 14-7 on Sunday to cap off the Cubs' 6-game homestand in deflating fashion for the North Siders. The Cubs utilized eight different pitchers on the afternoon, including starter Cole Hamels, who gave up two runs in five innings of work. On the flip side, the Cubs struggled against Nationals starter Stephen Strasburg, who fanned 10 on the day, in the early goings before collecting two runs off him toward the end of his 6-inning outing.

Anthony Rendon provided the Nats with a 1-0 lead when he led off the fourth frame with a monstrous solo shot that sailed out onto Waveland Avenue. In the top of the fifth, Rendon had another chance to tally an RBI when the Nationals pulled off a double steal to put men on second and third during his at-bat. However, Rendon grounded out to end the half-inning and leave both baserunners stranded. With two outs in the bottom half of the fifth, the Cubs garnered their first of two game-tying homers in the contest when Addison Russell lofted a solo jack into the basket atop the left-field wall.

Hamels gave up back-to-back hits to start off the top of the sixth and was subsequently removed from the game. Reliever David Phelps entered in Hamels' wake and drew a double-play ball. A run scored on the double play, though, putting the Nationals back in front. The Cubs quickly responded by tying the game at two runs apiece, as Kris Bryant hit an RBI single to score Jason Heyward not long after Heyward was hit by a pitch to begin the bottom of the sixth.

A 2-out rally resulted in Washington scoring three runs and going up 5-2 in the top of the seventh. Cubs reliever Rowan Wick was pulled after the Nationals loaded the bases with two outs, and Kyle Ryan, who replaced Wick on the mound, gave up two straight singles, which resulted in the Nationals taking a 3-run lead. In the bottom of the seventh, Victor Caratini got one of those runs back for the Cubs by skying a towering solo dinger that sailed just inside the foul pole down the right-field line.

Caratini's long ball occurred with two outs, and the Cubs tallied another 2-out blast in the bottom of the eighth. Facing off against former Cubs reliever Fernando Rodney, Kyle Schwarber clubbed a 2-run opposite-field homer with two outs, thus making the score 5-5 after Javier Baez notched a 2-out walk. Cubs closer Craig Kimbrel entered to pitch the ninth and picked up a clutch strikeout to end the inning and leave runners stranded on first and second.

Following Kimbrel's critical punchout, the Cubs were fairly ineffective at the dish. Outside of an essentially meaningless 2-out walk of Caratini in the bottom of the ninth, the Cubs did not accomplish anything offensively after Schwarber's home run. Cubs reliever Tyler Chatwood faltered in the top of the 11th, as he gave up two runs via a wild pitch and an RBI single by Rendon, and the Cubs proceeded to go down in order in the bottom of the 11th. The 7-5 contest wrapped up the first sweep put together by the Nationals at Wrigley Field since 2005. Rendon led the charge for the Nationals by going 4-for-5 with two runs scored and two RBI.