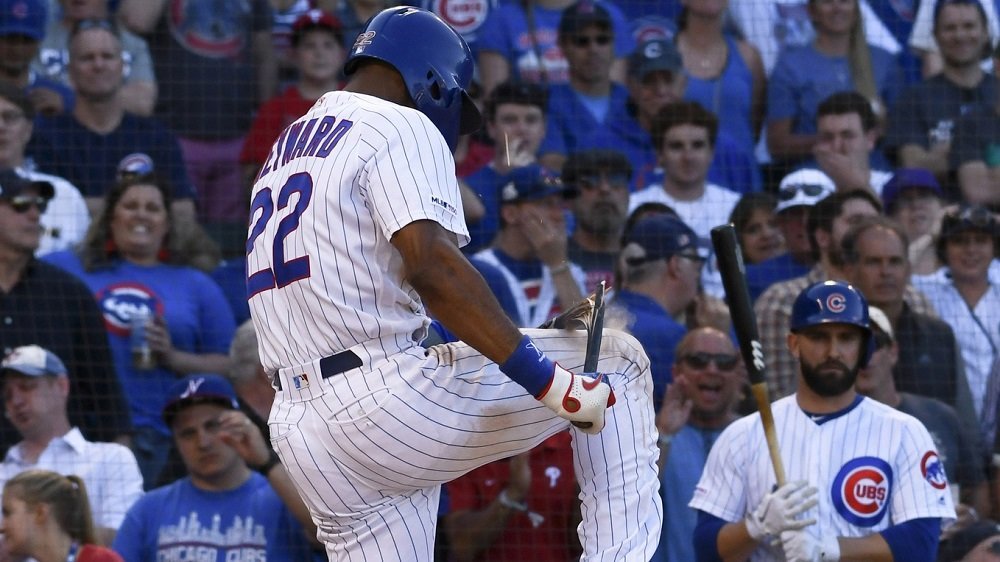 Jason Heyward was so frustrated after striking out in the bottom of the ninth that he broke his bat over his knee. (Credit: Matt Marton-USA TODAY Sports)

CHICAGO, Ill. — Instead of waving the white flag after going down 7-0 in the top of the fourth, the Chicago Cubs (29-19) put forth a valiant comeback attempt against the Philadelphia Phillies (29-21) on Thursday. In the end, however, it was all for naught, as the Cubs squandered multiple scoring opportunities in the late innings and came up short. The Phillies survived with a 9-7 victory to earn a series split in the 4-game set at Wrigley Field, but the Cubs did not give in without a fight in the dramatic contest, which lasted just under four hours.

Cubs left-hander Jon Lester experienced a start that he will assuredly aim to quickly forget about, as he was taken for seven runs on seven hits in four innings pitched. Andrew McCutchen led off the game with a double for the Phillies and was scored soon afterward on a base knock by Bryce Harper that provided Harper with his lone RBI of the series. Harper went on to score himself as a result of a wild pitch by Lester.

Another leadoff double sparked a 2-run third inning for the Phillies. This time, Jean Segura tabbed a 2-bagger off Lester, and he was plated on a sacrifice fly. J.T. Realmuto proceeded to go yard off Lester after that, with the Philadelphia catcher hammering a 456-foot bomb that made the score 4-0. The Phillies added three more runs in the fourth inning, two of which came on a 2-run jack by Segura.

Trailing 7-0 at that point, the Cubs proceeded to grind away at the Phillies in a comeback effort that fell just short of being a success. Phillies starter Aaron Nola dominated through three innings of work before allowing the first five batters of the bottom of the fourth to all reach base before an out was recorded. Cubs first baseman Anthony Rizzo, who went 4-for-5 on the day, hit a 2-run single that put the Cubs on the scoreboard. A double-play groundout a few at-bats later enabled Rizzo to cross the plate and decrease the Cubs' deficit to four.

Chicago reliever Rowan Wick, who was called up on Wednesday, gave up a run in the top of the fifth, and the Cubs next had a chance to cut into the Phillies' lead with two outs and the bases juiced in the sixth. An inning-ending groundout by Victor Caratini squelched the scoring threat, though, but the Cubs used the long ball to make a game out of it in the seventh frame. Left fielder Kyle Schwarber went yard for the seventh time this season on a 2-run jack that carried 408 feet. Then, Rizzo hit a rope that was lined into the seats for his 13th dinger of 2019. Rizzo's solo round-tripper pulled the Cubs to within two runs of the Phillies.

After McCutchen came through with an RBI double in the top of the eighth, Cubs shortstop Javier Baez just missed getting underneath a pitch and sending it flying for a game-tying 3-run homer in the bottom of the eighth. Instead, the well-hit ball that incited the crowd was caught in deep left field for the third out, thereby stranding two runners. Phillies reliever Hector Neris, who forced Baez into the inning-ending flyout, remained in the game for the bottom of the ninth and worked himself out of a jam.

Rizzo sparked a last-ditch rally for the Cubs with a leadoff bunt single in the ninth that took advantage of a shift. Neris then issued a walk but was next able to strike out Jason Heyward on a full count after Heyward was up 3-0 at one point. Cubs reliever Tyler Chatwood, who is an adept hitter, brought in a run with a double into the left-field corner, but Neris composed himself thereafter and struck out Addison Russell and forced Caratini into hitting a game-ending flyout to cap off the 9-7 Phillies win. The Cubs collected 11 hits and eight walks on the afternoon but left 10 men stranded on base and went just 2-for-10 with runners in scoring position.