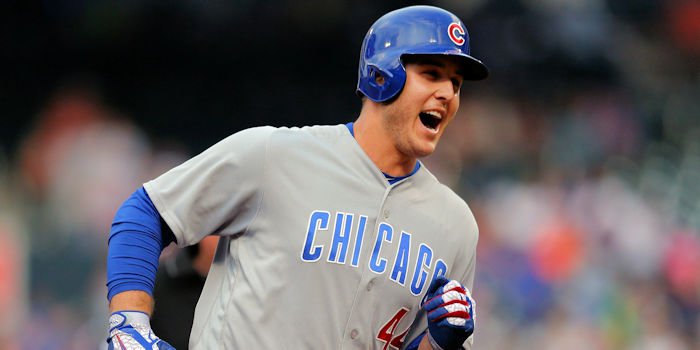 NEW YORK -- After losing five out of their last six games, the Chicago Cubs came into Tuesday's contest with the New York Mets in need of a dominant win, and, thanks to five home runs, including a grand slam, they got just that.

Home runs have played a significant role in the enigmatic season that the Cubs have had thus far, with the team frequently winning games by way of multi-homer performances and frequently losing games due to starting pitchers giving up homers. In addition, many of these game-changing homers have taken place in the early innings, and Tuesday night's 14-3 Cubs victory followed suit with that trend.

One for every #Cubs homer. ?https://t.co/fsb4HTMhYu (Via MLB Fans) pic.twitter.com/vUOmHdDtIA

First baseman Anthony Rizzo incited the action for the Cubs, booming a 462-foot homer to start the game. Rizzo, who now has 14 home runs on the year, batted leadoff for the first time in his career, and it paid dividends for Chicago. The Mets knotted the game up at 1-1 in the bottom of the first, as left fielder Yoenis Cespedes drove home center fielder Juan Lagares after Lagares led off with a single and an ensuing steal. That proved to be Cubs starting pitcher Jon Lester's only blemish of the game. Lester went on to pitch seven quality innings and earn his fourth win of the season, which marked the 150th win of his illustrious career.

Congratulations to @JLester34 on his 150th career win, 2nd among active LHP! pic.twitter.com/K0IWMV8Onr

Helping Lester's cause was the fact that he had practically no pressure on him after the top of the second, with the Cubs scoring seven runs to take a commanding 8-1 lead. Heading into the game, the Cubs had been defeated seven consecutive times when facing off against a right-handed starting pitcher on the road. That streak was convincingly ended on Tuesday, as New York righty Zack Wheeler was shellacked, lasting only 1.2 innings on the mound.

The seven-run second featured an epic two-out rally that blew the game wide open for the Cubs. With a runner on first and two outs, Lester, of all people, produced at the plate by collecting a single that was followed by a walk to load the bases. Thereafter, Wheeler came undone, walking in a run and giving up a grand slam to rookie sensation Ian Happ. Happ's first career grand slam, the round-tripper put the Cubs up 6-1 and provided Happ with his sixth home run of 2017. Interestingly enough, Happ also struck out four times in the game, going 1-5 and becoming the rare player to collect both a grand slam and a golden sombrero in the same contest.

Wheeler remained in the game after the grand slam, for some reason, and proceeded to give up an additional two runs. Chicago third baseman Kris Bryant accrued a single and then stole second. A follow-up single pushed him to third, and a double by shortstop Addison Russell not long after that cleared the bases and made the score 8-1 in favor of the North Siders. Wheeler was then finally yanked, but the damage had already been done, leaving the Mets to face a virtually insurmountable deficit for the remaining seven and a half innings.

Rizzo continued to make a case for possibly becoming the Cubs' regular leadoff hitter in the third inning by hitting an RBI double to right off of Josh Smoker. Catcher Willson Contreras began the inning with a single to left and followed that up with a steal. Later in the inning, Rizzo capitalized off of that by driving Contreras home. Rizzo went 2-4 with three RBI, two runs scored and one walk in a rather productive night at the plate. In fact, the Cubs' hitters, as a whole, were very productive on the night, with every starting batter reaching base by the third inning.

Leading 9-1 after the third, the Cubs coasted to victory, giving up only seven hits in all while collecting 15 of their own. Chicago added to its already vast lead in the sixth by way of a two-run bomb from right fielder Jason Heyward. Heyward, who now has six home runs and 29 RBI to his name, finished the game 2-5.

Bryant got in on the home run-hitting action, too, slugging a solo moonshot in the seventh to put the Cubs up 12-1. Bryant was outstanding in the game, garnering two walks and scoring three runs while going 2-3 at the dish. Cubs infielder Javier Baez, who had only just been inserted into the game as a defensive replacement in the eighth, put a bow on the offensive onslaught for Chicago by smacking a two-run home run in the ninth, giving Chicago a 14-1 advantage. Baez now sports 10 long balls and 28 RBI on the season.

The Mets made a valiant effort at not being outdone in the home run department by hitting two solo shots of their own off of Cubs reliever Felix Pena in the ninth, as Neil Walker and Lucas Duda went deep in back-to-back at-bats. However, the pair of ninth-inning four-baggers by New York did not mask the fact that the 14-3 matchup was a one-sided affair tilted in the Cubs' favor.

Behind the aforementioned solid plate performances by their top hitters, as well as Lester's seven-inning, 10-strikeout showing, the Cubs dominated from start to finish. Looking the part of a World Series contender for the first time in several games, Chicago will look to maintain its solid play in the rubber match against the Mets at Citi Field tomorrow night.