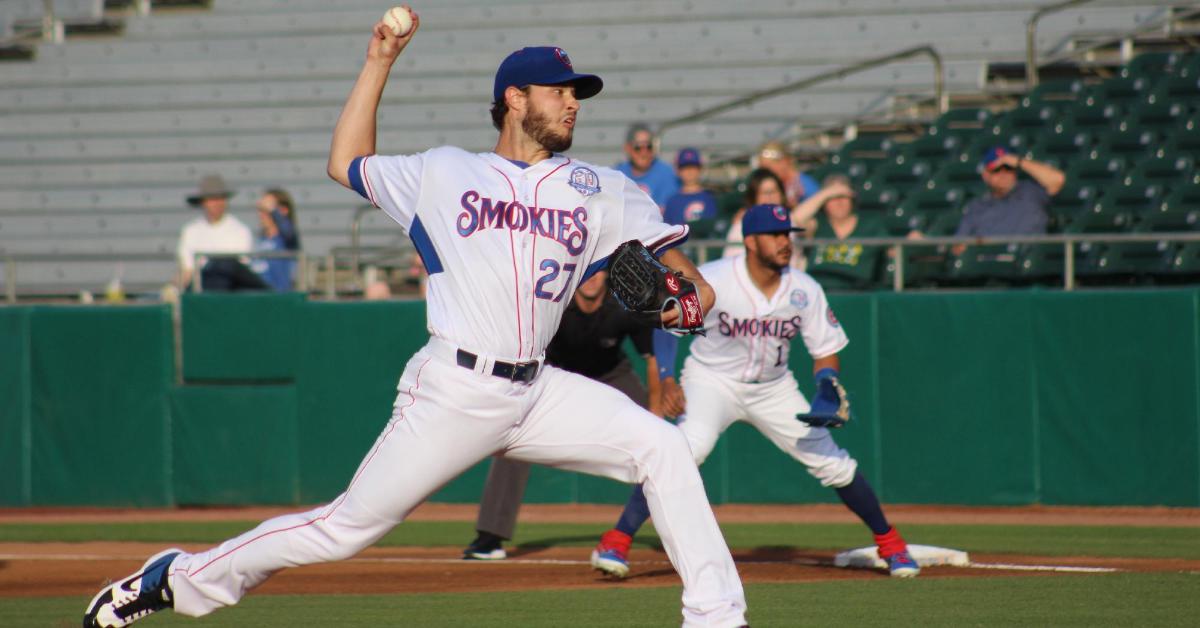 It was not a good night on the farm for the Cubs as they limped to an 0-4 record on the evening.

TENNESSEE SMOKIES 1 – Montgomery Biscuits 6: Already with a series loss, the Smokies turned to Thomas Hatch in hopes of ending things positively. Hatch (4-10) carried his fair share on the day, lasting six innings and allowing just 2ER in the process. However, a rough outing from Oscar De La Cruz in relief coupled with minimal offensive support handed the Smokies a 6-1 defeat.

Despite their overall struggles on offense, Tennessee got things going in the first as they managed to take an early lead. Nico Hoerner continues to hit the cover off the ball, picking up a one-out double to set the offense up. With two down, Wynton Bernard worked a walk to keep things going as Vimael Machin followed that up with an RBI single for the early 1-0 lead. Not only was that the lone lead of the day for Tennessee but it was their only run.

Jesus Sanchez tied things up at 1-1 in the third inning picking up an RBI triple. Lucius Fox delivered the game-winning hit in the bottom of the sixth as his double put the Biscuits in front for good 2-1 chasing Hatch from the game following that inning. Montgomery continued to add on in the seventh when Vidal Brujan picked up a double to make it 3-1 but in the eight is when the Biscuits delivered the knockout blow preventing any chance of a Tennessee comeback.

Since moving to the pen, De La Cruz has been solid in relief as he may have found his true calling. Monday was not a great outing for him as the Biscuits kept the pressure on him with tons of baserunner traffic. Add in a Rene Pinto double and Miles Mastrobuoni single and a once manageable 3-1 deficit grew to a 6-1 lead before the Smokies surrendered by that score in the ninth inning.

Tennessee looks as if their playoff hopes have gone out the window as they are sitting at 40-48 on the season. The Smokies didn’t have a breakout offensive performance with six players picking up one hit each in the win. Some good news that came from this loss was Allen Webster continuing his rehab from an early season injury beginning his AA assignment last night.

First at bat double for #Cubs prospect @nico_hoerner his sixth two-bagger of the season in his 77th at bat.

MYRTLE BEACH PELICANS 1 – Down East Wood Ducks 3: A promising start to the second half is starting to go south as the Pelicans faced off against the Wood Ducks who they can’t seem to solve this season. With Ryan Kellogg delivering one of his better outings of the season delivering five innings of 1ER ball, it was the bullpen letting things get away late as the Wood Ducks picked up a rain-shortened 3-1 win.

The one thing the Pelicans continue to do a better job of during the second half is score early, and once again that was the case on Monday. With a pair of hit by pitches putting Zach Davis and Tyler Durna on base a Jimmy Herron single in the middle loaded the bases with nobody out as the Pelicans had a golden opportunity early. Tyler Payne made sure to capitalize on that situation with a sacrifice fly, but an aggressive baserunner attempt from Herron caused him to be thrown out at third killing the rally with Myrtle Beach up just 1-0.

That lead didn’t last long as the Wood Ducks drew even in the second on the Curtis Terry homer for his fourth of the season. That score would hold up until the top of the sixth inning when Enrique De Los Rios took over in relief. The first batter he faced was Julio Pablo Martinez who greeted him with a rude welcome with his ninth homer of the season to give the Wood Ducks the lead for good 2-1. Josh Altmann would later add an RBI single to push the lead to 3-1 as the bottom of the sixth was about to get underway.

Davis managed to lead things off with a single but was thrown out trying to steal second to end any real threat keeping things 3-1 at that point. That is when the heavens opened, and mother nature unleashed her ugly wrath on the ballpark forcing things to end early with Down East picking up a 3-1 rain-shortened win.

The Pelicans are now 30-56 on the season but are still hovering around the .500 mark for the second half. The Pelicans managed just two hits in the game with Davis and Herron grabbing one each. Durna and Delvin Zinn combined to go 0-4 while Miguel Amaya had the night off.

On a beach vacay and went to a @Pelicanbaseball game. I need everyone to know they have the BEST bat dogoo ever ?? pic.twitter.com/7jUNFGzze7

SOUTH BEND CUBS 4 – Dayton Dragons 5: Looking for the series sweep against the Dragons; South Bend got a great start from Brendon Little as he is starting to get comfortable after missing time with an injury. In just his second start for the Cubs this season, Little held the Dragons to 1R on 2H in three innings before the bullpen took over the rest of the way. What looked to a promising game until the ninth turned ugly quick as Sean Barry surrendered 4ER in the bottom of the ninth to give the Dragons a walk-off 5-4 win.

Down 1-0 after the Dragons plated a run in the first, the Cubs responded in the top of the third as they grabbed the lead. Marcus Mastrobuoni has slowly been seeing the ball better as of late, and that culminated in his first homer of the season to give the Cubs a 2-1 lead. That lead grew to 3-1 in the fourth as Fidel Mejia launched his first homer of the season to back Little with some early run support.

Still 3-1 heading into the seventh, South Bend was looking for some insurance runs as the bullpen had to put in a bit of overtime on this day. Look no further than Cole Roederer who seems to be shaking off a little bit of a slump with a sacrifice fly to push the lead to 4-1. With that score still intact in the ninth, the Cubs turned to Barry with hopes of him sealing the deal yet again.

Barry has been on quite a roll this season as it seems like he never allows a run in his appearances. That all changed in the ninth as the Dragons picked up RBI singles from Michael Siani and Bren Spillane to tie things up 4-4 as Barry blew his second save of the season. Things went from bad to worse a few pitches later as Pabel Manzanero got in on the hit parade to deliver the third RBI single of the inning to give the Dragons the walk off 5-4 win.

South Bend was on the verge of reaching ten games above 500 for the first time this season but will now sit at 47-39 following the loss. The offense was limited with five players picking up one hit for the Cubs, but Clayton Daniel continues to hit grabbing one of those five hits. Christopher Morel added another hit after receiving player of the week honors as Roederer and Brennan Davis went hitless in the loss. Brian Glowicki made his A ball season debut and tossed three scoreless innings in the process.

The Dragons comeback and walk-off the Cubs in the series finale. After the off day tomorrow, we'll start our three game series against Kane County on Wednesday! pic.twitter.com/AtXbsLJYzu

EUGENE EMERALDS 7 – Salem -Keizer Volcanos 9: For the second night in a row, the Emeralds offense provided plenty of excitement as they brought home another seven runs. Unfortunately for them, the pitching failed to perform at the same level allowing nine runs including eight in one inning to fall 9-7 on the day.

Things couldn’t have gotten off to a better start for Eugene as both Grayson Byrd, and Jake Slaughter picked up RBI hits in the first to give the Emeralds an early 2-0 lead. That lead quickly went south in the second as Zach Mort was on the rough end of a monster inning from the Volcanos.

The long ball was undoubtedly a beneficiary early in the second for Salem-Keizer as Alexander Canario tied things up 2-2 with his first of the season. A few batters later saw Simon Whiteman hit what looked like a routine grounder to Luis Vazquez. However, a throwing error not only allowed two more runs to score but opened the flood gates in the process with the lead now 4-2 Volcanos.

Singles from Sean Roby, Brandon Martorano and a Canario double busted things open as the Volcanos pushed across eight runs in the second to take a commanding 8-2 lead. With Eugene now in full catch-up mode the rest of the game, the Emeralds were focused on chipping away each inning with hopes of the bullpen keeping things close.

Both of those seemed to be holding true as the game went on as Chase Strumpf picked up his first homer of the season in the third before adding an RBI groundout in the fifth to make it an 8-5 game. Eugene also scored on a wild pitch in the fifth. In the seventh, it was time for Zac Taylor to make things interesting as he connected on with his third double of the season to plate a pair making it an 8-7 ball game. Unfortunately for Eugene, they wouldn’t get any closer as the Volcanos added a run in the eighth to make it a 9-7 game before winning by that score.

Eugene is now a season-worst five games under 500 as they fell to 10-15 with the loss. Byrd continues to see the ball well, leading the way with three hits to bring his average to .438 for the year. The Ems also picked up multi-hit efforts from Taylor, Strumpf and Edmond Americaan with Strumpf and Taylor driving in two men apiece. 12th pick Hunter Bigge was part of a strong bullpen effort making his second appearance and striking out five men in two innings.

Tough loss tonight, but a hero's welcome in the dugout after @CStrumpf blasted his first professional homer. #EverybodyIn | #ItAllStartsHere pic.twitter.com/SAHMjKLCtF