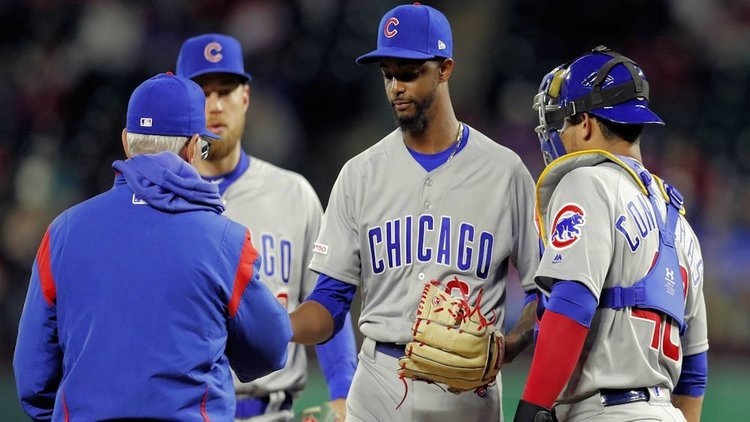 It was another strong showing for the Cubs Farm System last night as several strong performances led to a dominating night going 3-1.

IOWA CUBS 10 – Nashville Sounds 4: Perhaps the biggest story of the day came from Nashville even before the game got underway as relievers Kyle Ryan, and Allen Webster were promoted to Milwaukee. In return, Iowa received Carl Edwards Jr. in hopes of him regaining his form and confidence in a less stressful setting.

Matt Swarmer took the ball in this one tossing five innings of three-run baseball. It may not have been the best start, but the offense certainly backed him up. Dakota Mekkes continued his strong start to the season out of the pen while Tim Collins got the ball in the ninth allowing just one run.

After a scoreless couple of frames to start the game, Iowa erupted in the third inning beginning with a two-RBI double from Johnny Field. A Jim Aducci sacrifice fly made things 3-0 before consecutive bases-loaded walks from Donnie Dewees and Dixon Machado pushed the lead to 5-0.

A 2-for-5 performance with one double and three RBI gives Ian Happ EMC Player of the Game honors! pic.twitter.com/qbypHC5p2E

Ian Happ, looking to bounce back from his tough game on Friday, capped off the scoring in the third with a two-run single as Iowa raced in front 7-0 and never looked back.

The only real blemish on the night from Swarmer came in the fourth inning when Patrick Wisdom crushed a three-run homer to cut the lead to 7-3. The Iowa offense was back at it once again in the seventh as a Taylor Davis two-run shot and Happ Single pushed the lead to 10-3 before the Cubs emerged victorious 10-4. Happ was 2-5 on the evening with three RBI’s and zero strikeouts as he continues to perfect his game.

TENNESSEE SMOKIES 4 – Mississippi Braves 3: The most competitive games of the young minor league season have been in AA and Saturday night was no different as the Smokies picked up their second win of the season 4-3. Keagan Thompson was as good as advertised in his start going five shutout innings with just one walk and eight punchouts. That lone walk was the only baserunner he allowed as the Braves were not able to pick up a hit against him.

The Smokies wasted no time getting on the board first as Jared Young continued his hot start to the season with a first-inning homer giving the Smokies a 1-0 lead early. With both pitchers fully into their grooves early, the Smokies were able to add on in the fifth as an Eddy Martinez single, and Charcer Burks sac-fly stretched the lead to 3-0.

The three-run lead seemed like a mountain to climb with the way Thompson was pitching, but once he was lifted in the sixth, the Braves began to mount their comeback. A two-run triple from Ray Patrick Didder in the sixth added with the Jordan Minch wild pitch in the eighth took a 3-0 Smokies lead and flipped it to 3-3 heading into the bottom of the eighth. That is when it was time for one of the Cubs top prospects to make a name for himself.

After an 0-4 one strikeout start to his night, Nico Hoerner erased all that with one swing of the bat. His infield single in the eighth proved to be the game winner as Tennessee held on for the 4-3 win over the Braves.

Smokies Highlights 4/6 vs Mississippi: Keegan Thompson and Nico Hoerner led the way for the Smokies on Saturday night. pic.twitter.com/7X1A3tBu6a

MYRTLE BEACH PELICANS 2 – Lynchburg Hillcats 0: The lone winless team in the farm system through two games has been the Pelicans, but that all changed Saturday thanks to a strong team effort on the hill. Started by Ryan Kellogg and finished by both Ben Hecht and Paul Richan the Pelicans held the Hillcats scoreless despite 11 hits striking out nine batters and walking just two.

On the offensive side of things, the Pelicans were certainly handcuffed as they managed only three hits in the contest. However, they made those three hits count especially in the sixth inning. With a man on base in the sixth, Tyler Payne singled home the eventual winning run to make it 1-0 but was able to advance 90 feet on a fielding error on the same play. That aggressiveness proved to be valuable as Payne scampered home on a passed ball a few pitches later to lift the Pelicans 2-0.

Check out the highlights from the Pelicans first win of 2019! pic.twitter.com/dRjN9nzVgu

SOUTH BEND CUBS 1 – West Michigan Whitecaps 3: The unbeaten season came to an end for South Bend as they were not able to stay hot against the Whitecaps at their venue. With Eury Ramos taking the ball against Carlos Guzman, this game was set up to be pitchers dual, and it certainly delivered.

With both teams held scoreless through four innings of play, it was the Whitecaps striking first in the fifth as Ramos began to come unglued. Consecutive doubles from Sam McMillan and Avery Tuck gave West Michigan all the support they needed at 2-0 before a wild pitch pushed the lead to 3-0. Ryan Lawlor took over from there for South Bend hoping to keep the game close and did just that allowing two baserunners the rest of the night and striking out four.

Looking for their first run of the game, South Bend finally put an end to the shutout in the top half of the seventh inning. With one out, three straight singles from Fidel Mejia, Tyler Durna and Nelson Velazquez loaded the bases with as the Cubs had their best threat of the night. However, South Bend wasn’t able to do much with that as a wild pitch pushed across the lone run of the night for the Cubs before two-straight outs ended the inning helping West Michigan hold on 3-1 for the victory.

Cubs fall for the first time in 2019. Back at it tomorrow afternoon! pic.twitter.com/rMdXqYdQ5X