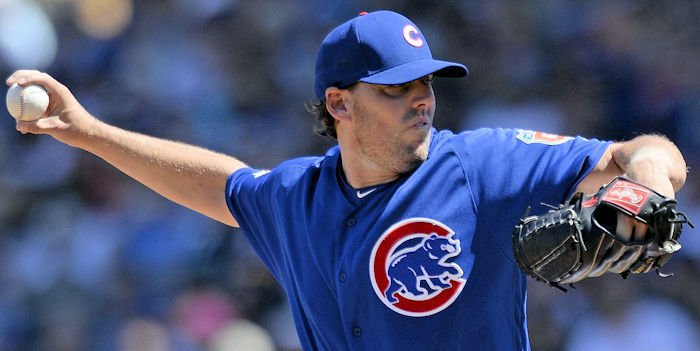 CHICAGO -- Chicago Cubs starting pitcher John Lackey might have suffered the most frustrating loss of his 15-year Major League career on Sunday afternoon. Giving up only six hits to the Texas Rangers, one of the best offensive teams in baseball, and striking out eight, Lackey was solid throughout his eight innings on the mound. However, a bad second inning did the 37-year-old in, as the Rangers took a 2-0 lead and never looked back, winning by a final margin of 4-1.

The Cubs entered Sunday’s game at Wrigley Field with a franchise record-tying win streak against American League teams (six games). Therefore, they had a chance to set the bar a little higher today by defeating and, thus, sweeping the AL West-leading Rangers, but they came up short.

With runners on first and second in the top of the second, Texas shortstop Elvis Andrus hit a single to center that enabled the shockingly fast Prince Fielder to score from second. (Perhaps he was borrowing Elvis' blue suede shoes for Sunday's game.) Then, with runners on the corners, catcher Robinson Chirinos hit a sacrifice fly to center that drew in a run and provided the Rangers with an early 2-0 lead.

The Cubs capitalized on a Rangers error in the bottom half of the third, which was a theme of the three-game series. A rare error by two-time Platinum Glove Award-winner Adrian Beltre at third base enabled rookie center fielder Albert Almora, Jr., to reach first base safely with one out. After a Lackey popout, Chicago second baseman Javier Baez collected his lone hit of the afternoon, an impressive double to left that scored Almora and cut the Rangers’ deficit to one run. Unfortunately for the North Siders, that would prove to be their only run of the afternoon.

While offensive success was at a minimum for Chicago on Sunday, defensive success was aplenty. Almora and shortstop Addison Russell both produced web gems on the day. Almora caught a ball in deep left-center while simultaneously colliding with the ivy-covered wall, and, later in the game, Russell made a remarkable diving snag in the gap between short and third that he followed up with an even more remarkable throw to first that outed the unlucky hitter, Rangers left fielder Ryan Rua.

Along with Rangers right fielder Nomar Mazara, the aforementioned Rua scored on a double to left by Chirinos in the top of the fourth, putting Texas up 3-1. With the Cubs failing to threaten at the plate in the ensuing innings, Rangers center fielder Ian Desmond, who has rejuvenated his career this year, hit a home run to left off of Lackey in the top of the eighth to give the Rangers a 4-1 lead and essentially squelch the Cubs’ chances of attaining a series sweep. The homer was Desmond's 16th of the season.

Pulled after eight innings, Lackey earned a loss for his efforts, dropping him to 7-6 on the year. His counterpart, Rangers ace Cole Hamels, was, quite simply, better than Lackey, throwing eight innings on the hill and only giving up four hits in the Rangers' 4-1 victory over the Cubs. Earning a win that moved him to 10-2 on the year, Hamels was stellar on Sunday afternoon, striking out seven and bolstering his Cy Young résumé in the process.

The Cubs are now 55-36 overall, and the Rangers stand at 55-38. Currently holding an eight-game lead over the St. Louis Cardinals (47-44) in the National League Central, the Cubs will look to carry the momentum of their series victory over the Rangers forward. The Cubs have the luxury of playing 21 of their next 29 games at home, so Chicago should be expected to return to its winning ways.

With the New York Mets (49-42) coming to town, the Cubs will assuredly be seeking revenge for the embarrassing three-game sweep that they suffered at Citi Field earlier this month. In game one of the three-game affair, which is slated to begin at 6:00 PM CST tomorrow night, Jon Lester will be on the bump for the Cubs, and he will face off against the appropriately-named Steven Matz of the Mets.