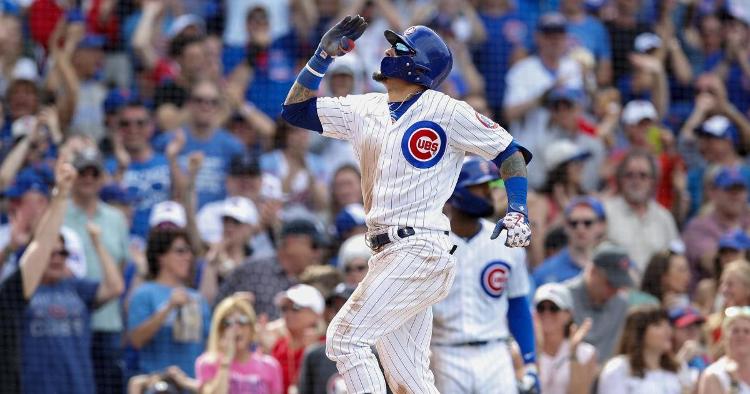 Javier Baez was fired up while rounding the bases on his 100th career home run. (Credit: Jim Young-USA TODAY Sports)

CHICAGO — With one mighty swing of his bat, Chicago Cubs (42-35) shortstop Javier Baez tallied the winning hit and also reached a notable milestone on Sunday. Baez powered out a go-ahead 3-run homer in the bottom of the eighth, thus electrifying the Wrigley Field crowd and recording the 100th home run of his career. The clutch dinger culminated in a 5-3 victory for the Cubs against the New York Mets (37-41) in the finale of the 4-game set, which resulted in a series split.

Most of the contest was defined by the pitching duel between Cubs ace Cole Hamels and Mets ace Jacob deGrom. Hamels pitched seven innings of 3-run ball and notched five strikeouts, while deGrom lasted six innings, in which he gave up two runs and fanned nine. Pulling deGrom proved to be costly for the Mets, as reliever Seth Lugo was taken deep by Baez in the inning following deGrom's departure. Although deGrom stood his ground in several tight spots, the Cubs were able to collect eight hits off him as part of an effective afternoon at the dish for the North Siders. Racking up 12 hits, the Cubs went a respectable 3-for-8 with runners in scoring position and were led by right fielder Jason Heyward, who manufactured a solid 3-for-4 showing.

Hamels took matters into his own hands in giving himself a lead to work with. In the bottom of the second, Hamels hit a 2-out base knock to right that brought Heyward in to score and put the Cubs up 1-0. Mets slugger Pete Alonso evened the score at 1-1 with a monstrous 454-foot solo shot to lead off the fourth frame. The dinger marked Alonso's 27th long ball of the year, which is a Mets rookie record. The next inning saw the Mets register another leadoff bomb, as Tomas Nido hammered a 428-foot tater that gave the Mets a 2-1 lead. Following an ensuing double by Juan Lagares, deGrom answered Hamels' aforementioned RBI single with one of his own, thereby putting the Mets ahead by a score of 3-1.

This video is for the hundreds of people who commented on our lineup post this morning. #LGM pic.twitter.com/mKU7nwZlfh

The Cubs outscored the Mets 4-0 the rest of the way, beginning with an RBI liner hit by Anthony Rizzo in the bottom of the fifth. Cranking a line drive off the wall in left-center, Rizzo plated Kris Bryant, who hit a ground-rule double in the previous at-bat. Rizzo was thrown out attempting to stretch the single into a double, but Bryant was able to score and cut the Cubs' deficit in half prior to that. Baez slapped a leadoff single to center to lead off the bottom of the sixth, but he was thrown out on a steal attempt soon afterward. "El Mago" made up for the failed steal in a major way, with his next at-bat resulting in the go-ahead round-tripper.

Taking Lugo deep with one out in the eighth, Baez was fired up while rounding the bases on his 100th career homer, with his game-winning 374-foot shot scoring Kyle Schwarber and Rizzo to put the Cubs up 5-3. Baez went 2-for-4 on the afternoon and now has 19 home runs and 51 RBI on the season. Cubs closer Pedro Strop entered the game in the top of the ninth with a save opportunity on the line, and he delivered by sitting the Mets down in order and locking down the 5-3 comeback win for the Cubbies.