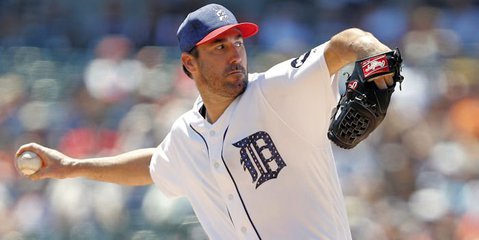 The Chicago Cubs starting rotation has not played up to expectations in 2017 with injuries and some of the older starters finally looking like their age. The team's season ERA is up to 4.47 ERA which is currently seventh in the National League.

However, the Cubs might be ready to bolster the rotation with a big splash before the trade deadline as they have inquired on the availability of starter Justin Verlander and catcher Alex Avila according to multiple reports.

According to MLB Insider Jon Morosi, the Cubs had a scout in attendance watching Verlander on Sunday when he gave up seven runs in 3 1/3 innings to the Cleveland Indians. It was one of his worst starts of his career and he didn't even get a strikeout during the contest.

Verlander's contract is 78 million over the next three years and entails a full no-trade clause. He is open to waiving the no-trade clause with the right situation.

"My focus is here and now," Verlander said on Sunday via ESPN. "If there's a decision to be made, then [GM Al Avila] and I will talk about [waiving the no-trade]. I'm not thinking about anything other than pitching and playing for the Detroit Tigers until -- or if -- anything happens."