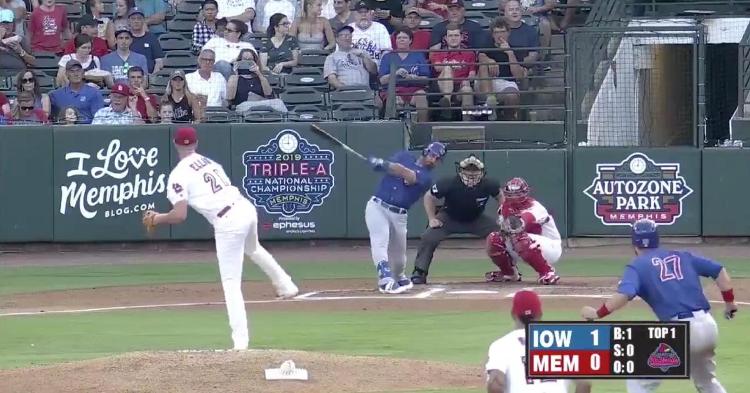 MEMPHIS, Tenn. — On Saturday, a trio of veteran Chicago Cubs took part in a Triple-A game with the Iowa Cubs. In addition to utility man Ben Zobrist, who is continuing his minor-league journey en route to rejoining the Cubs, center fielder Albert Almora Jr. and infielder Daniel Descalso also suited up for Iowa in the matchup at AutoZone Park against the Memphis Redbirds.

Although Memphis defeated Iowa 8-6, Almora, Descalso and Zobrist all showed out in the contest. Almora and Descalso both made their debuts for Iowa, as they were sent down to Triple-A for separate reasons. While Descalso is rehabbing from an ankle injury, the struggling Almora was demoted on Friday in order to make room on the Cubs' 25-man roster for second baseman Addison Russell, who was called up from Iowa.

Almora kicked things off for Iowa with an infield single in the first at-bat of the evening, and he stole second base thereafter. Zobrist, who was playing in his third game with Iowa, then sparked his squad with a go-ahead RBI double that scored Almora. Soon afterward, Zobrist was plated on a 2-run home run by Descalso. Descalso made an immediate impact for Iowa, with his opposite-field blast putting the Cubs up 3-0 over the Redbirds.

Daniel Descalso homers in the first at-bat of his rehab assignment with Iowa. Ben Zobrist scores after reaching on a double. pic.twitter.com/ZGWbEDBKHO

Later in the game, Almora, who served as Iowa's leadoff hitter, smacked a double, culminating in his 2-for-4 stat line at the dish. Zobrist started at second base and finished 1-for-4 with a bat in his hands. As for Descalso, who started at third base, he went 1-for-2 in his two plate appearances before being pulled in the fourth inning.

Iowa spoiled an early lead as Memphis grabbed a walk off victory.

Albert Almora Jr. went 2-for-4 with a double and a run scored out of the leadoff spot.