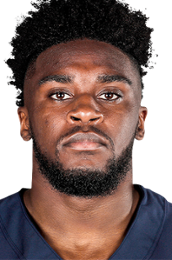 Enters his second season with the Bears in 2021; selected in the second round of the 2020 NFL Draft (50th overall)

Started all but three games (Weeks 15-17) for the Bears at cornerback, missing the final three games and the Wild Card playoff game due to a shoulder injury
Despite missing the last three regular season games, Johnson still finished fourth in the NFC with 15 PDs; had five games with multiple PDs
His five PDs in his first two games were the second most by a rookie defender in their first two games since the league started tracking PDs in 1999 (Marcus Peters had seven through his first two games in 2015)
Started at cornerback Week 1 at Detroit, making him the first Bears rookie to start at corner on opening day since Walt Harris in 1996; became the first non-first round draft pick to start at corner for the Bears in the opener since Mike Richardson in 1983; also broke up a Matthew Stafford pass in the end zone on the final play to help secure the victory
Recorded three tackles and two PDs in the win at the Panthers; broke up a pass on Carolina's opening drive that led to a Tashaun Gipson Sr. INT and set up Chicago's first touchdown
Logged five tackles his second most of the season in Week 10 and added one PD