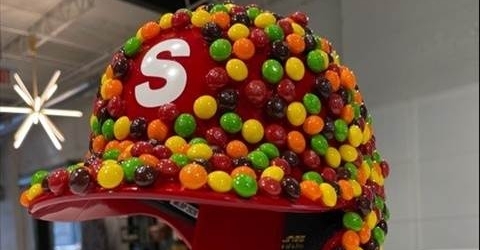 A tasty hat was gifted to Ian Happ

Chicago Cubs outfielder Ian Happ was pelted with Skittles from a few unruly fans back during the road series against the Minnesota Twins.

"I got hit yesterday with a flying object," he said in an interview. "It was actually a Skittle from the left-field stands at Target Field,” he shared. "I felt like I got shot by like an air-soft gun. I was so mad. I turned around. I was just livid. There was a group of (individuals in their 20s), just scum. And they were throwing Skittles at me in the middle of the game."

However, there is a happy and tasty ending for Happ.

Skittles sent him a custom Skittles helmet to wear at games or whenever he feels like making a fashion statement by wearing the one-of-a-kind hat.

The helmet had a stand that included an engraving for Happ.

Thanks to Skittles for sharing the fun moment with CubsHQ.com.