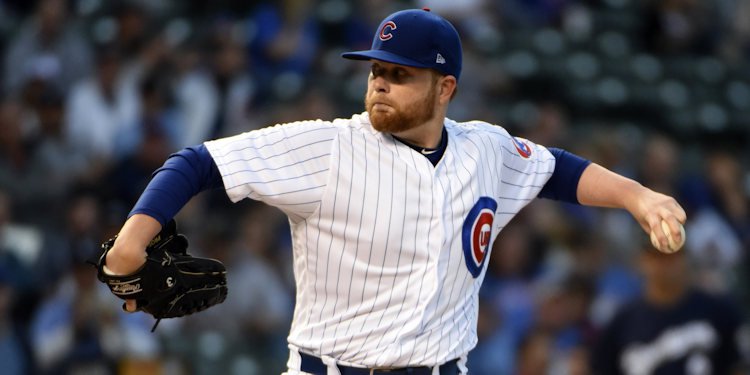 Currently in his first season wearing a Cubs uniform, pitcher Brett Anderson has been far from effective in his past two starts.

CHICAGO -- In Game 1 of the much-anticipated series between the New York Yankees and the Chicago Cubs at Wrigley Field, the Cubs lost by way of a relief pitching meltdown. In Game 2, the starting pitching was an issue for the North Siders, with a five-run explosion by the Yankees in the top of the first practically wrapping the game up before it could even begin. Thanks to a dismal outing by first-year Cub Brett Anderson on the hill, Chicago fell behind early and could not catch up, losing 11-6 at the hands of the Yankees.

For the second straight start, Anderson was a mess, allowing six hits and five runs in .1 innings pitched, inflating his woeful ERA to 8.18. Anderson was shaky from the very beginning, giving up a leadoff double to the Yankees' Brett Gardner and following that up with a blatant throwing error in an attempt to convert a New York bunt into a Chicago out. The error enabled Gardner to round the bases and score, and that 1-0 lead was increased soon after when former Cub Starlin Castro hit an RBI double to right.

Anderson managed to strike out the next batter but returned to subpar form in the ensuing three at-bats, all of which resulted in hits. Castro was brought home on a single, which was proceeded by another single, and Yankees third baseman Chase Headley brought an end to Anderson's nightmarish start with a two-run double toward the wall in right. Trailing 5-0 at that point, the Cubs chose to pull Anderson from the game.

Anderson's ineptitude in this game accentuated the questions surrounding the Cubs' 29-year-old offseason acquisition, who received a smattering of boos as he walked, head down, to the dugout after being yanked tonight. Anderson showed signs of discomfort on the mound prior to being taken out and was reported to have been suffering from lower back tightness, which could possibly explain his Saturday night troubles.

Anderson came out of the game because of low back tightness. He's being evaluated. #Cubs

Anderson's dismal appearance provided rookie reliever Félix Peña a chance to showcase what he is made of in a 3.2-inning outing, and, although he started off pitching well, Peña was ultimately racked by the Bronx Bombers, too. A misplayed grounder by Cubs third baseman Kris Bryant resulted in a Yankees run scoring in the third, and the game was basically put out of reach in the next inning, as Castro continued to get his revenge against the team that traded him away with a two-run home run to left off of Peña. Castro, who finished the game 3-4 at the plate with three RBI and two runs scored, now has six home runs and 19 RBI this season.

Meanwhile, Chicago's batters were, in the grand scheme of things, not performing any better, as the Cubs only collected one hit in the first four innings. Rookie starting pitcher Jordan Montgomery pitched very well overall for the Yankees, allowing only three hits in 6.2 innings on the rubber. The lefty's only struggles occurred in the bottom of the fifth. After walking the leadoff batter, Montgomery was victimized by Cubs second baseman Javier Báez on a double to deep right that put runners on second and third.

Two batters later, Cubs left fielder Jon Jay hit an RBI groundout to shortstop. After that, Cubs right fielder Ben Zobrist reached first and took second due to a throwing error by Yankees shortstop Didi Gregorius. The error also enabled Baez to score, making the game 8-2 in favor of New York. Montgomery was relieved with two outs in the bottom half of the seventh inning after Zobrist smacked an RBI triple to left that scored Jay, as the Cubs' offense began to come to life late in the game.

On the flip side, the Cubs' pitching fiasco continued into the eighth, which saw the North Siders fall behind 11-3. Chicago relief pitcher Rob Zastryzny gave up a three-run homer to Yankees center fielder Aaron Hicks, who went 4-5 at the plate and batted three runs in. Zastryzny pitched four innings and was fairly effective, with the exception of the home run, but tonight simply was not the night for the Cubs' pitching staff.

The Cubs made things interesting by adding three runs to the scoreboard in the eighth. Cubs shortstop Addison Russell incited the action by tripling off of Yankees pitcher Tommy Layne. A walk of Chicago outfielder Albert Almora followed, and Báez, who finished 2-4 with two runs scored and one RBI, took advantage by scoring Russell and advancing Almora to third on a single to shallow left.

Later in the inning, after Baez took second on a passed ball, Cubs pinch hitter Miguel Montero hit an infield single to second that resulted in two runs scoring and a Yankee pitching change. That proved to be the last of the Cubs' offensive success, though, as the Yankees held on to win 11-6. Epitomizing the desolate pitching situation for Chicago in the game, Montero, a catcher, pitched in the ninth inning. Shockingly, Montero proved to have the best outing of any other Chicago hurler on Saturday, as he escaped with zero runs to his name.

Accruing 14 hits to the Cubs' seven, the Yankees (19-9) were impressive at the dish and rode their early-inning dominance to an 11-6 win against the Cubs (16-14). Anderson received the loss on the night, dropping him to 2-2 on the year, and Montgomery was credited with the win, upping his record to 2-1.

The Cubs have now dropped two straight to the Yankees and will look to avoid a sweep on their home turf tomorrow night, as young Yankees star Luis Severino (2-2, 3.86) will face off against veteran Cubs ace Jon Lester (1-1, 3.67) on the mound. The first pitch is scheduled for 7:00 PM CST at the Friendly Confines, and the game will be broadcast on ESPN.