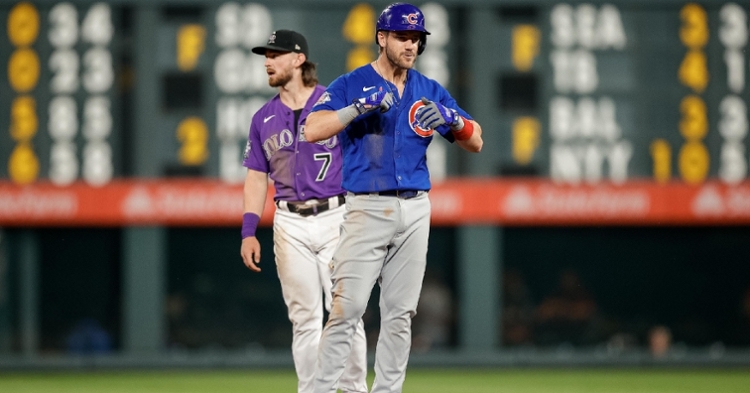 DENVER — A bases-clearing double by Patrick Wisdom was all that the Chicago Cubs (52-57) needed to come away with a win over the Colorado Rockies (47-61) on Wednesday. For just the second time ever, the Cubs won at Coors Field with fewer than four runs. It also served as the second-ever Cubs win at Coors Field in which the North Siders did not homer. A two-out rally in the top of the fifth, which was capped off by Wisdom's three-run two-bagger provided the Cubs with the lead, and they went on to post a 3-2 victory.

Jon Gray sat the Cubs down in order in the top of the first, which saw home plate umpire Kerwin Danley leave the game due to injury after appearing to tweak his back on the last pitch of the half-inning. Roberto Ortiz called balls and strikes for the rest of the contest. Alec Mills was roughed up out of the gate, as Raimel Tapia and Brendan Rodgers doubled in the Rockies' first two plate appearances. Tapia scored on Rodgers' double, and Rodgers, who reached third on a wild pitch, was plated on a Trevor Story groundout.

Wisdom and David Bote singled on the first two pitches of the second frame, but the Cubs were unable to take advantage. Mills gave up another double to Tapia with two outs in the second but then struck out Rodgers. He drew a double play groundout off the bat of C.J. Cron to end the next inning. Johneshwy Fargas struck out to strand runners at the corners in the fourth but made it for up by gunning a runner down from left in the home half of the same frame. Ryan McMahon hit a leadoff double was thrown out by Fargas when tagging up and advancing to third.

Rafael Ortega and Willson Contreras hit back-to-back singles with two outs in the fifth, and Ian Happ drew a walk that loaded the bases. Tapia nearly robbed Wisdom of a hit in deep left but dropped the ball upon colliding with the wall, resulting in the aforementioned go-ahead double. Mills continued to dominate in the wake of his first-inning woes, getting Charlie Blackmon to ground into an inning-ending double play in the fifth. Fargas hit a base knock in the sixth but was thrown out by Elias Diaz on a steal attempt.

Story made a great play at shortstop to corral a hard-hit ball off the bat of Contreras in the seventh but proceeded to airmail his throw to first. Following the error, Contreras took second on a wild pitch by Jhoulys Chacin, who relieved Gray to begin the inning. With Contreras heading for third, Happ struck out looking to end the half-inning. Adam Morgan tossed a 1-2-3 bottom of the seventh. Carlos Estevez walked Frank Schwindel and gave up a single to Fargas with two outs in the eighth, but he then forced Sergio Alcantara to fly out.

Codi Heuer worked around a leadoff single in the eighth, as Story once again grounded into an inning-ending double play. Matt Duffy hit a leadoff single with Daniel Bard on the mound in the ninth. He then got thrown out by Diaz on a steal attempt, though. Manuel Rodriguez's last appearance involved him giving up a walkoff home run, but he bounced back by notching his first career save on Wednesday. Diaz kept the Rockies alive with a two-out single, but the game ended soon afterward, with the Cubs recording a come-from-behind 3-2 triumph.

First career save for @manrod_77! pic.twitter.com/xfmL7Psomp