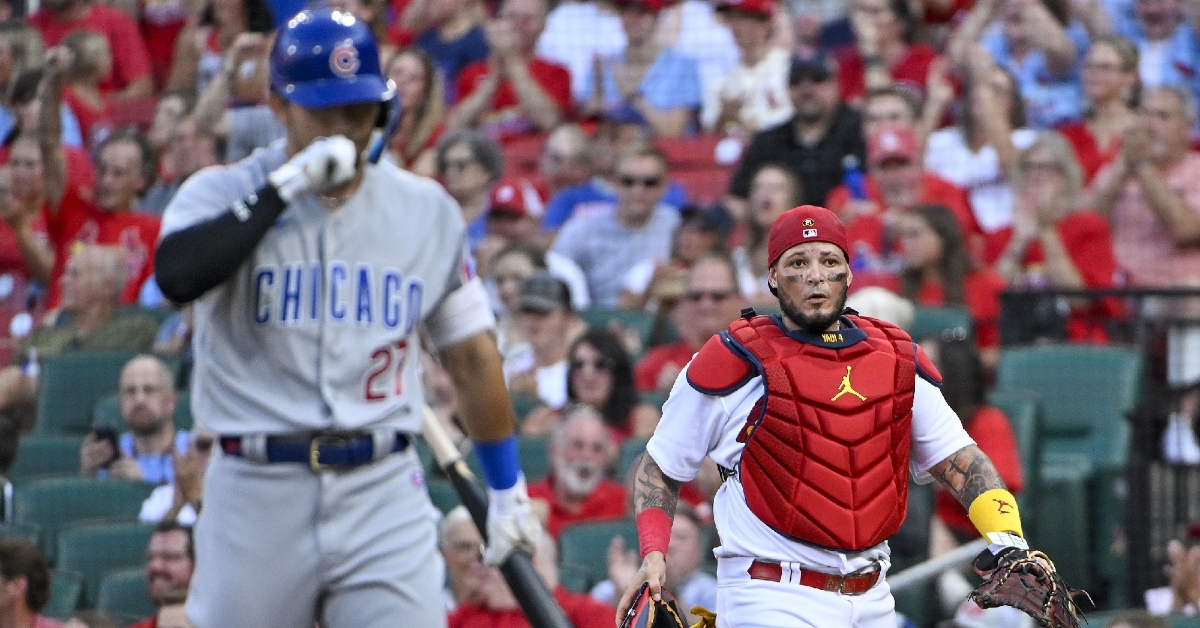 ST. LOUIS - Now that the 2022 MLB trade deadline has passed, teams can once again focus on the task at hand of finishing out the regular season. Things didn't go as expected for the Chicago Cubs (41-61), as this was a much quieter deadline than in seasons past.

To everyone's surprise, neither Willson Contreras nor Ian Happ was traded as Jed Hoyer felt no deal was good enough to pull the trigger. You could see how happy both players were at Busch Stadium Tuesday night as the Cubs kicked off a three-game set with their hated rivals, the St. Louis Cardinals (55-48).

Battling for a playoff spot both in the division and as a wildcard, the Cardinals made significant upgrades to their roster, including adding left-handers Jose Quintana and Jordan Montgomery into the mix. Add in the return of Yadier Molina, and this team is getting healthy at the right time as they made quick work of the Cubs 6-0.

Taking the ball for Chicago was Keegan Thompson, who was looking to keep things rolling. One of the more consistent starters for the Cubs, Thompson did not have one of his better outings as he allowed a season-high 10 hits in just 4 2/3 innings and was charged with five earned runs.

That poses a problem when the veteran Adam Wainwright is on the hill as he has dominated the Cubs over the last two seasons. Not the pitcher he once was, Wainwright continues to prove his worth as he gave the Cardinals seven innings of shutout ball with four strikeouts before Jordan Hicks and Chris Stratton finished things off.

The Cubs were hoping for a quick start with Rafael Ortega leading off the game with a single, which was followed by a long fly-out by Contreras. A double play later, and the inning was over. The Cubs continued to have some early success off Wainwright as a pair of two-out singles from Patrick Wisdom, and Frank Schwindel gave the Cubs a chance in the second only to come away empty.

Like the Cubs, the Cardinals had their chances across the first two innings only to see Thompson figure out a way to keep them off the board. The same can't be said in the third inning as a leadoff single from Tommy Edman was followed by a one-out ground rule double from Nolan Gorman, helping to set the Cardinals offense up. That brought Paul Goldschmidt to the table and, like he has done so many times before, made the Cubs pay as his two-run single not only put the Cardinals in front 2-0, but proved to be the game-winning hit.

With the Cubs continuing to struggle with Wainwright on the mound, the Cardinals delivered the knockout blow in the fight as it was time for them to use the long ball. Not only did Dylan Carlson connect for a two-run shot two batters in, but Goldschmidt would answer with a solo shot two batters later as the Cardinals pushed their lead to 5-0. For Goldschmidt, it was his 25th homer of the season to go with 81 RBIs as he continues to have an MVP-caliber season for St. Louis.

Still trailing by five in the seventh, Yan Gomes was hoping his two-out single would be the start of a late game rally, but Wainwright had other ideas as he finished the inning to complete the seventh and left with a shutout intact. For the most part, the Cubs bullpen was solid, and seeing Anderson Espinoza put together another strong outing bodes well for the future.

The right-hander not only struck out three in his two innings of work, but allowed just a solo homer to Nolan Arenado in the seventh as the Cardinals built a 6-0 cushion. That was the 20th homer of the season for him as he has built a strong middle of the order alongside Goldschmidt.

Down to their final at-bats and looking to, at the very worst, put an end to the shutout, Nico Hoerner got things started as his leadoff single gave the Cubs a baserunner. Unfortunately for the Cubs, nothing came from it as Stratton got Schwindel to ground into a game-ending double play to cap off the Cardinals dominating 6-0 victory.

Gomes has quietly been on a nice run lately and led the offense again with two hits. Ortega, Contreras, Hoerner, Wisdom, and Schwindel all had hits for the Cubs, but it was another quiet night for a team that continues to flounder.