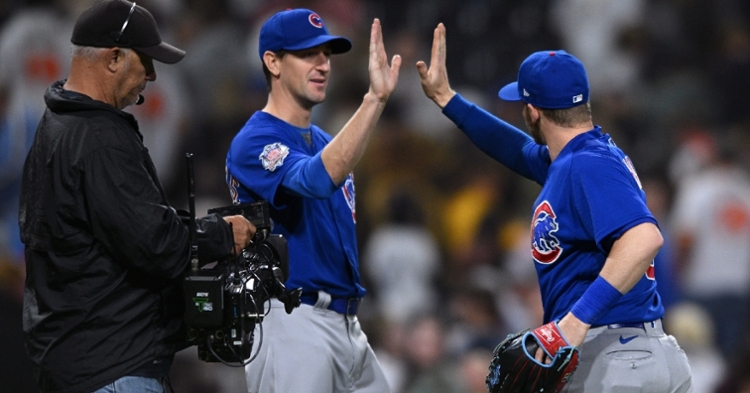 SAN DIEGO - Baseball is a weird game, isn't it. After looking lifeless on their most recent homestand that saw the Chicago Cubs (10-18) lose all five games, it was off to the West Coast. First on the docket was a trip to Petco Park to take on the San Diego Padres (19-11). Looking to settle into a groove was Kyle Hendricks as he returned to the place where he threw his first shutout back in 2015.

Maybe it is the overall comfort level of pitching on that mound or just the struggles that the Padres have against him, as Hendricks was brilliant. Not only did he live up to the billing of the Professor by teaching the Padres a lesson, but the right-hander picked up a much-needed win, giving the Cubs 8 2/3 shutout innings. He allowed just three hits, one walk, and seven strikeouts, but his 117 pitches were why he couldn't finish things off. Regardless, this was the outing he needed as the Cubs took down the Padres 6-0.

A big reason for the Cubs early season success was finding the ability to score first consistently. Not only has that happened few and far between over the last three weeks, but this is an offense that has struggled to score in general. With MacKenzie Gore on the mound, the Cubs wasted no time as Willson Contreras led the game off with a single before coming home to score on the Seiya Suzuki double to give the Cubs the lead for good 1-0.

Seiya and Willy get us started in San Diego! pic.twitter.com/dtDb9fjURL

Little did the Cubs know, that run would be enough as Hendricks was about to put on a clinic for the Padres. Despite allowing two of his three hits across the first three innings, Hendricks managed to face the minimum as he retired those baserunners once they reached base.

That helped the offense relax a bit more, with Patrick Wisdom and Yan Gomes leading off the fourth inning with singles to help set the offense up. Ian Happ would cash in with a huge two-out single as the Cubs doubled their lead 2-0. Happ has been a pleasant surprise this season and has been their most consistent hitter of the year.

The next inning saw the Cubs open things up with singles again as Jason Heyward and Contreras had runners on the corner with no outs. With one RBI under his belt, Suzuki was looking for a huge hit only to roll into a double play. Although a run did score on the play, Suzuki left the game, injuring his ankle on that play.

This was the stage of the game when Hendricks got dialed in as he retired the next 10 hitters he faced and helped keep the Padres offense in check. Looking for some late-game runs, Heyward got things started with a two-out single before stealing second base to set up the Cubs offense again. The suddenly hot Contreras continued to keep things rolling as his single extended the lead to 4-0.

San Diego finally ended Hendricks streak with a Manny Machado single, but nothing came from it as Heyward made an incredible catch to end the inning and kept the shutout in tact. One of the more intriguing names to watch on the trade market in the coming weeks is Dinelson Lamet, as he took over in the eighth.

Already fielding trade options for the former starter, Lamet would make an excellent option for any, but the Cubs had plans to show they could hit him. Gomes connected for a one-out single to put another runner on base. Following a walk to Alfonso Rivas, Nico Hoerner was called out on what looked like a double play, only to have instant replay overturn that call.

That proved beneficial for the Cubs as Happ laced an RBI double to left to make things 5-0 before an error on the same play extended the lead to 6-0 in favor of the Cubs. With just three outs standing between him and a complete game shutout, David Ross let Hendricks return for the ninth as he earned the opportunity.

Despite being given a chance, you could see fatigue setting in as Hendricks walked Jake Cronenworth for his lone walk of the night, then allowed a long flyout for out No.2. 117 pitches later, it was time for Ross to pull Hendricks in favor of Scott Effross as the righty would fall one out short of the complete game. That didn't matter at this point, with Effross doing what he has been called on to do and sealed the 6-0 win for Chicago.

Contreras started to heat up over the Cubs last homestand, and that continued with three hits on Monday to lead the way. Gomes, Happ, and Heyward had multi-hit games as they accounted for nine of the team's 11 hits in the win. Chicago returns to the diamond tomorrow night as Wade Miley is set to make his season debut.