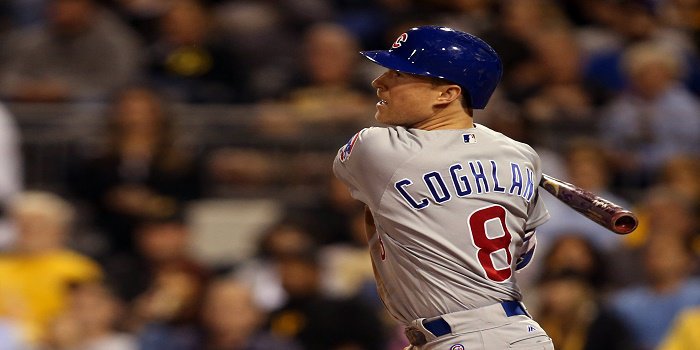 PITTSBURGH -- Veteran outfielder Chris Coghlan is a versatile talent and has proved time and time again to be an ace in the hole when coming off of the Chicago Cubs’ bench. However, Coghlan, now in his second stint with the Cubs, started on Tuesday night and helped deliver Chicago a 6-4 victory over the Pittsburgh Pirates.

With Cubs manager Joe Maddon opting to rest several of the regular starters for Tuesday night’s game, Coghlan was inserted into the starting lineup. Originally playing in right field, the jack of all trades was eventually relocated to first base, after starting baseman Anthony Rizzo was pulled from the action.

Coghlan’s primary contribution, though, came in the form of a bases-clearing triple in the top of the second. With two outs and the bases loaded, Coghlan smacked a triple to deep center that scored shortstop Javier Baez, second baseman Munenori Kawasaki and center fielder Dexter Fowler, putting the Cubs up 3-0.

The three second-inning RBI brought Coghlan’s total to 30 on the year, and his triple proved to be the game-winning hit for Chicago. Coghlan finished 2-4 at the dish, with one walk and his first stolen base of the season.

Cubs starting pitcher John Lackey fared well in his five innings on the mound, striking out three and only allowing one run to score. In the bottom of the second, Pirates right fielder Matt Joyce led off with a single to left and was then advanced to third on a bloop single to right by second baseman Sean Rodriguez. Thereafter, Pittsburgh catcher Francisco Cervelli, who was 1-3 on the evening, hit into a double play but brought Joyce home, nonetheless.

Rookie infielder Munenori Kawasaki of the Cubs crossed the plate on an RBI double by center fielder Dexter Fowler in the top of the fourth. The double toward the wall in right-center earned Fowler his 48th RBI of the season and increased the Cubs' lead to 4-1. Despite multiple errors, wild pitches and passed balls committed by the Cubs in the later innings, the Pirates were unable to ever take full advantage, though they did provide the Cubs with quite a scare.

Rookie Cubs center fielder Albert Almora, Jr., hit a triple of his own in the top of the ninth, hitting one to deep center off of Pirates reliever Antonio Bastardo. Later brought home due to an error committed by Pittsburgh left fielder Gregory Polanco, Almora scored to provide the Cubs with a 5-1 advantage. Baez, who went 2-4, next collected his 58th RBI of 2016, driving in catcher Miguel Montero on a two-out single to center, giving the Cubs a commanding five-run lead.

Trailing 6-1, the Pirates put forth a valiant comeback effort in the bottom of the ninth. Cubs reliever Justin Grimm struggled from the get-go after entering the game to start the inning, giving up a leadoff double to Cervelli. Grimm found himself in a bases-loaded jam soon after and had no success escaping it. Polanco and center fielder Andrew McCutchen hit consecutive singles that brought home three Pittsburgh runs.

Consequently, Grimm was relieved of his duties on the hill, and, aside from a wild pitch, Grimm's replacement, Chicago reliever Felix Pena, prevented a Cubs meltdown from coming to fruition. Entering with runners on first and second and one out, Pena struck out the only two batters whom he faced to secure a 6-4 Cubs win against the Pirates and collect his first save of the season.

Lackey earned the win to move to 11-8, the first time that he has won back-to-back starts since June, and Pirates starter Ryan Vogelsong, who gave up the triple to Coghlan, took the loss, dropping to 3-7. With the win, the Cubs, who, at the start of tonight's game, had most recently won over 100 games in 1910, improved to 101-56, while the Pirates fell to 77-80 with the loss and are now barely alive in the National League Wild Card race. Game three of the four-game affair will commence tomorrow night inside of PNC Park at 7:05 PM EST.

Chris Coghlan drives in three as #Cubs win No. 101.

The #Cubs have reached 101 wins for the first time since 1910. #FlyTheW pic.twitter.com/4A1hVKQlun