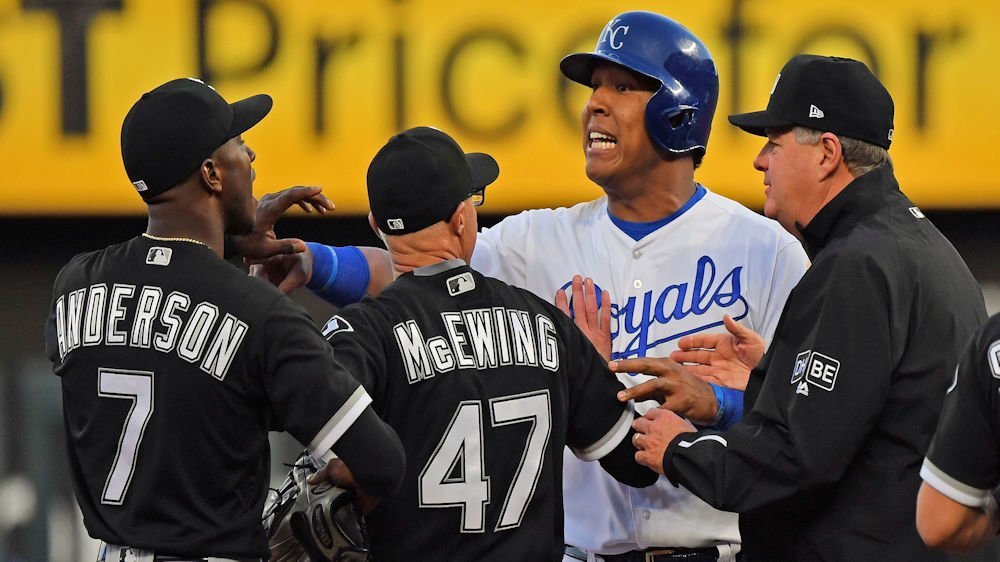 Is there anything sadder than watching grown men hugging each other in the middle of a baseball diamond after another baseball brawl? Baseball “brawls,” and that is a misused word, are a complete and total waste of time. I’ve seen 6-year-old girls slap fighting look tougher than a major league ballplayer defending his teammate.

Earlier this week the Chicago White Sox Tim Anderson insulted Salvador Perez of the Kansas City Royals when his home run trot was deemed inappropriate for some idiotic reason. I mean, seriously? They stood at second base discussing things when the rest of their team decided that this was an excellent time to gather behind the mound and exchange phone numbers.

There has already been several of these canards so far in 2018, and we just hit May for god’s sake. Wait until the weather heats up, we’ll be having so many of these it will look like a “Dancing with the Stars” tryout.

In today’s baseball world you can’t: Throw inside; slide feet first; run slow/fast around the bases; celebrate a play; look at me; whistle; or blow bubbles.

No one appreciates a good sports fight like me. Hockey has the best, good stuff, and with real feeling. NASCAR used to have good ones, but Danica Patrick retired so they will slide back. Football is almost as stupid as baseball because the other guy rarely takes off his helmet. Hitting a guy in the head wearing one is just nuts.

The last terrific baseball fight involved Pedro Martinez slamming 70 something-year-old Don Zimmer to the ground in 2003. Now that my friend is a real dislike for the other team and while not very manly of Pedro it does send a message.

Anyway, what baseball needs to do is eliminate this nonsense once and for all, and luckily, they have me to help them. Here are a few suggestions they can use, free of charge.

Additionally, the first time any team clears the bench twice in a season the next home game for both sides has to be played in an empty stadium. This will deprive the teams of revenue, and nothing gets the owners' attention like taking money out of his wallet. To make sure the players don’t do it on purpose, they lose that day’s pay and meal money too.

While I don’t expect to see anything done about this in my lifetime, I will continue to speak out against the one fixable thing that slows down games.

MLB, you are welcome. I am happy to help and call with any questions. I’m in the book.