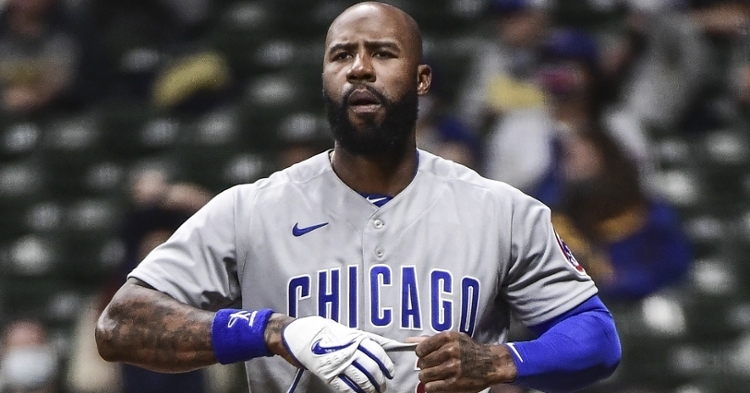 The Cubs 2022 season is underway, and once again, Jason Heyward is on the squad. Heyward is one of four current Chicago Cubs who were a part of the 2016 World Series team, joining Willson Contreras, Kyle Hendricks, and manager David Ross.

Heyward was signed by the Cubs ahead of the 2016 season and appeared to be the missing link of what was expected to be a World Series contending Cubs team. Heyward was inked to an eight-year, 184 million dollar contract after putting up a .293 batting average with 13 home runs and 60 RBI in 2015 with the division rival St. Louis Cardinals.

It is safe to say Heyward has not lived up to that contract. While he has provided excellent defense in right field and superb leadership — including the famous speech during the rain delay of game 7 of 2016 that powered the Cubs to their first championship in over 100 years — Heyward has been underwhelming offensively. He has never come within 25 points of that .293 batting average and has only accumulated more than 13 home runs or 60 RBI once in seven seasons.

The Cubs do not win a World Series without Heyward, but it can also be true to say they massively overpaid for him, and he is simply not a good player in 2022. While the Cubs would love for him to be a plus hitter and a staple in their lineup, it’s no secret the Cubs are likely better offensively without him.

The continued improvement of Ian Happ, who plays outfield, and the addition of Japanese superstar Seiya Suzuki into right field — leaves just one outfield position left for Rafael Ortega, who has been impressive with the Cubs, the youngster Michael Hermosillo, and former Yankee and power hitter Clint Frazier. But that also doesn’t include highly-rated prospect Brennen Davis who is expected to make his big league debut this season — and his talent will demand an outfield spot.

The Cubs have a designated hitter position now that they could use for Frazier. Still, the point remains the same: does Jason Heyward deserve at-bats over players like Rafael Ortega, Clint Frazier, or Brennan Davis in the future? My thought is no.

Heyward was an essential aspect of the team that broke the curse and still has some baseball left in him. However, I think the days of him being an everyday starter in right field are likely over. In my opinion, Ian Happ and Seiya Suzuki need to be in the lineup every day. Rafael Ortega should start, at least against righties. That leaves a platoon for Clint Frazier (against lefties) and Jason Heyward (against righties) at center or designated hitter. Heyward’s defense will also likely bring him into games late to help secure victories if the Cubs are ahead.

I expect that is how David Ross will handle the outfielders moving forward while also trying to find spot starts for Michael Hermosillo while David Bote and Andrelton Simmons are hurt. As those players get healthy, that likely will take Hermosillo out of the picture but add more players in the mix for designated hitter.

We’ll see what role the Cubs carve out for Heyward then, but even in limited playing time, Heyward can hopefully use his leadership and experience to guide some of the young outfielders. Suzuki can certainly learn the ins and outs of playing outfield at Wrigley Field from Jason Heyward — plus the young talent of Brennan Davis and Alexander Canario can only benefit from Heyward’s presence.

There is no sugar coating the fact that Heyward is a decent Cub and provides immeasurable value in the clubhouse — it’s just there is no denying that he is not the high caliber player on the field they thought they were paying for seven years ago.

Heyward can still be a valuable part of this Cubs team and contribute to the next wave of great talent on the Northside of Chicago, but the less we see of Heyward on the field may be better for the Cubs down the road.