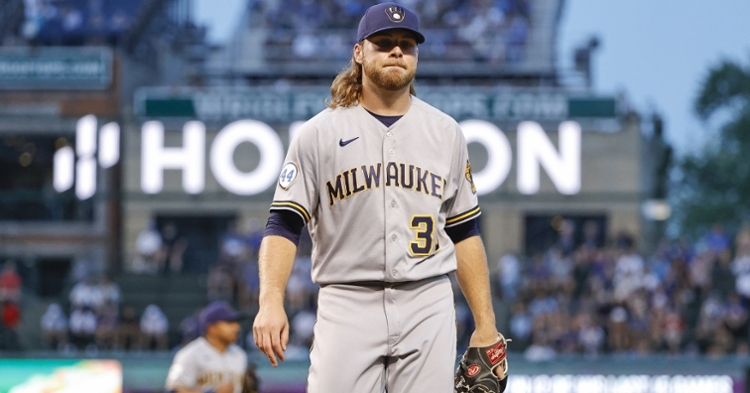 CHICAGO — A tale of two starts on the mound made for a lopsided outcome at Wrigley Field on Wednesday. After plating six runs in one inning on Tuesday, the Milwaukee Brewers (69-46) plated seven runs in an inning the next night. Jake Arrieta was roughed up out of the gate for the Chicago Cubs (52-64), getting tagged for seven runs in the top of the first. On the flip side, Corbin Burnes tied a big league record by striking out 10 in a row for the Brewers during the course of his scoreless outing. In the end, the Brew Crew shut out the Cubs, winning 10-0 and handing the North Siders their seventh consecutive loss.

Kolten Wong opened the game with a double and scored on an ensuing single by Christian Yelich. Yelich was plated via an Omar Narvaez base knock, which Greg Deichmann misplayed in right. Willy Adames was able to score because of Deichmann's fielding error. Avisail Garcia was then hit in the left hand on a swing that he went around on, and Tyrone Taylor finished his at-bat, resulting in a single that brought Narvaez home. Lorenzo Cain went on to hit a double that scored Taylor and Rowdy Tellez. The Brewers batted around, and Wong collected his second double of the frame. The two-out two-bagger plated Cain, and the marathon half-inning then finally ended on a Yelich groundout.

The Brewers had eight hits and three doubles in the first.#ThisIsMyCrew pic.twitter.com/9UEUw3dRYF

Rafael Ortega hit a leadoff single in the bottom of the first but was then outed at second on a fielder's choice, with Willson Contreras beating out the throw to first after hitting a ground ball. Ian Happ did not beat out the throw to first on his grounder, though, as he hit into an inning-ending double play. Adames led off the second with a double, but Arrieta prevented the Brewers from adding to their lead, as Taylor ended the half-inning by grounding into a double play. Burnes' strikeout streak began when he struck the side out swinging in the second. Arrieta then worked around a leadoff single by Jace Peterson, who pinch hit for an injured Tellez, in a scoreless top of the third.

Burnes yet again struck the side out swinging in the third. Yelich drew a leadoff walk in the fourth and eventually tagged up and scored from third on a sacrifice fly by Narvaez. The Cubs went three up, three down via a trio of swinging strikeouts once more in the fourth. Michael Rucker took the mound to begin the fifth and channeled Burnes by retiring the side in order by way of three swinging strikeouts. Frank Schwindel struck out swinging to begin the bottom of the fifth, giving Burnes his record-tying 10th straight K. Matt Duffy snapped the streak by smacking a single on the first pitch thrown to him. Following a Deichmann punchout, David Bote lined out to right, with Taylor making a great running catch to rob him of a hit.

Rucker sat the Brewers down in order again in the sixth, and Burnes did the same to the Cubs in the home half of the inning. A Narvaez single and a Peterson double failed to yield any runs in the seventh, as Rucker finished off his scoreless relief stint. Burnes pitched a 1-2-3 seventh, and Rex Brothers tossed a 1-2-3 eighth. Bote converted a slow roller into a two-out infield single in the eighth and took second when Narvaez suffered a passed ball. Romine advanced Bote to third by hitting a chopper and hustling for an infield single of his own. Burnes stranded the two runners at the corners by then striking out Sergio Alcantara.

Codi Heuer pitched the ninth, and Narvaez took him deep with a two-run blast to right. The dinger scored Eduardo Escobar, who singled in the previous at-bat. Taylor followed up Narvaez's homer with a base knock, and Peterson was then hit by a pitch. Heuer managed to keep the score at 10-0, however, and Burnes, who finished with 15 strikeouts, did not retake the mound in the ninth, as he was relieved by Hoby Milner. Milner retired the side in order, finishing off the Brewers' 10-0 shutout victory over the rival Cubs.