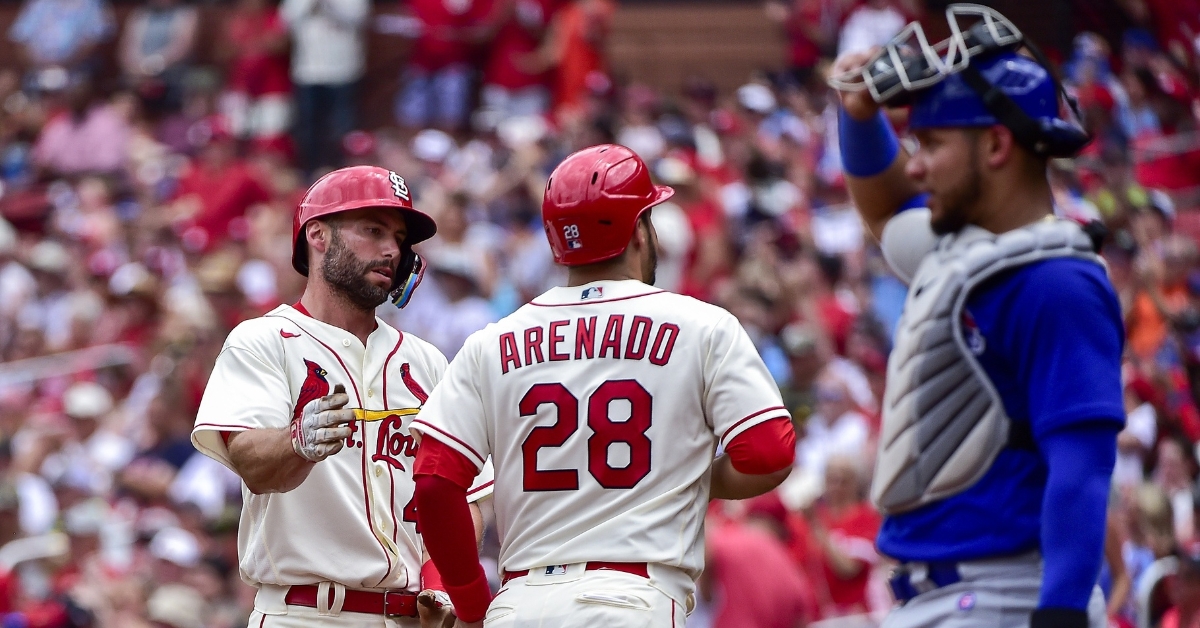 ST. LOUIS - No matter what the result is for the Chicago Cubs (27-45) this season, they won't go down without a fight. That is something that David Ross and his guys do better than most teams as they will fight until the better end and have proven to be a formidable opponent at times.

Facing a St. Louis Cardinals (41-33) squad battling with Milwaukee for first place, the Cubs continue to show the fight fans love. Whenever these teams face off, it doesn't matter if you are first or last in the standings. All that matters is that you will get a competitive game more often than not, as the Cubs tied things late and then fell 5-3 to the Cardinals.

Throughout the season, the Cubs have had to do some significant rotation shuffling as injuries have taken a toll on this team. Adrian Sampson was the next in line to get a start as he took over for Caleb Killian, who was sent back to Iowa.

Sampson made his season debut in relief last week and delivered an impressive outing by tossing 4 2/3 scoreless frames. That performance earned him the start and, for the most part, pitched well enough to win. Sampson gave the Cubs five innings of a two-run ball and allowed five hits while striking out five.

Opposing him was Miles Mikolas, who is having an impressive season. After dealing with injuries the past few years, Mikolas has been dialed in and looks like the Cardinals staff ace. His ERA is at 2.57, and he gave the Cardinals six innings of one-run ball with nine punchouts.

As good as Sampson was, he did struggle in the first inning, but managed to recover nicely after that. With two-down in the first, Paul Goldschmidt picked up a single before advancing to third on the Nolan Arenado double. A couple of pitches later saw Brendan Donovan put the Cardinals in front 2-0 as that was all Sampson would allow in his outing.

Given the way Mikolas was pitching, allowing just one baserunner through four innings, you had to like the Cardinals chances of coming out on top. However, the Cubs finally started to make some noise off Mikolas in the fifth and had an opportunity for a big inning.

Patrick Wisdom and Nico Hoerner led things off with singles as the Cubs offense was alive and well. Two batters later saw Alfonso Rivas get the Cubs on the board using a sacrifice fly to make things 2-1. A Nelson Velazquez single followed that up, but the Cubs came away empty-handed in terms of the clutch hit.

With Rowan Wick coming in to pitch the seventh, he was looking to finally put together a strong outing after his last few haven't been great. However, Wick continued to struggle with an Arenado single to open the inning before a walk put a pair of runners on base. Four pitchers later saw Dylan Carlson extend the lead to 3-1 as he doubled off Wick.

Take that away, Wick was good, but he continues to struggle to find the consistency the Cubs were hoping to get from him this season. With Mikolas out of the game, the chance was now for the Cubs to do damage, and after another Hoerner single was wiped away via a double play, that rally was gone.

Mark Leiter Jr remains in the Cubs pen and worked around a pair of two-out singles in the seventh to keep the Cubs within striking distance. In the eighth inning, the Cubs broke through on offense again as they stunned the Cardinals and Mikolas in the process.

Christopher Morel continued to produce out of the leadoff role with one down, using a single to put a runner on base. That set the tone for the suddenly hot Rafael Ortega, who, with one swing of the bat, brought things back to even 3-3, and the Cubs thought series victory at that point.

Contreras and Wisdom worked walks later in that inning, continuing to keep the Cubs threat alive, but Hoerner could not deliver, with Ryan Helsley striking him out to end the threat. With two down in the bottom of the eighth, Letier Jr ran into some trouble as a Juan Yepez double, and a hit by pitch to Harrison Bader put two runners on base.

Ivan Herrera followed that up with the game-winning sacrifice fly before the Tommy Edman RBI single pushed across some huge insurance as the Cardinals were back on top late 5-3. Down to their final three outs, Velazquez picked up a single to bring the tying run to the plate, but nothing came from it as Helsley got Morel to ground into a game-ending fielders choice. The Cubs had eight hits on the afternoon, with Hoerner and Velazquez leading the way with two.