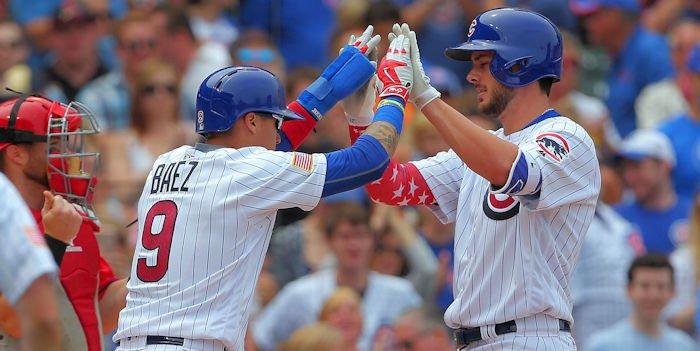 The Chicago Cubs (52-30) celebrated the Fourth of July with special uniforms, an emotional pre-game with a giant American Flag on the field, and with an impressive 10-4 win over the Cincinnati Reds in front of 41,293 fans at iconic Wrigley Field.

Outfielder Jason Heyward made his first at-bat count in his new six position in the batting order with a two-run double in the gap in the first inning to put the Cubs up 3-0. Heyward was a previous lifetime .310 hitter in the sixth position with the Braves and Cardinals.

Kris Bryant hit a two-run homer that traveled 407 feet to center field to make the score 5-0 Cubs. He has now tied the major league lead in homers with 24 and has eight homers, 20 RBIs versus Cincinnati this season. It was also his 50th career homer, and he is the first Cubs player to homer on July 4th two years in a row since Bobby Murcer in 1977.

Rookie phenom Wilson Contreras hit a solo blast immediately after Bryant to make it 6-0. It was his fifth homer of his young career in only his 52nd career major league at-bat.

A fielding error that went between the legs of third baseman Eugenio Suarez scored two more for the Cubs to put them up 8-0.

Albert Almora Jr. and Kris Bryant collided with each other in left-center field in the fifth inning, and Bryant was subsequently lifted for pinch-hitter Matt Szczur at the bottom of the inning. The Cubs are calling the injury a contusion on the lower portion of his left leg.

Addison Russell added to the festivities as he smashed a two-run homer into the basket in left field to make it 10-1 Cubs. It was his ninth homer of the season.

Cubs closer Hector Rondon came in for the final three outs in the non-save situation.