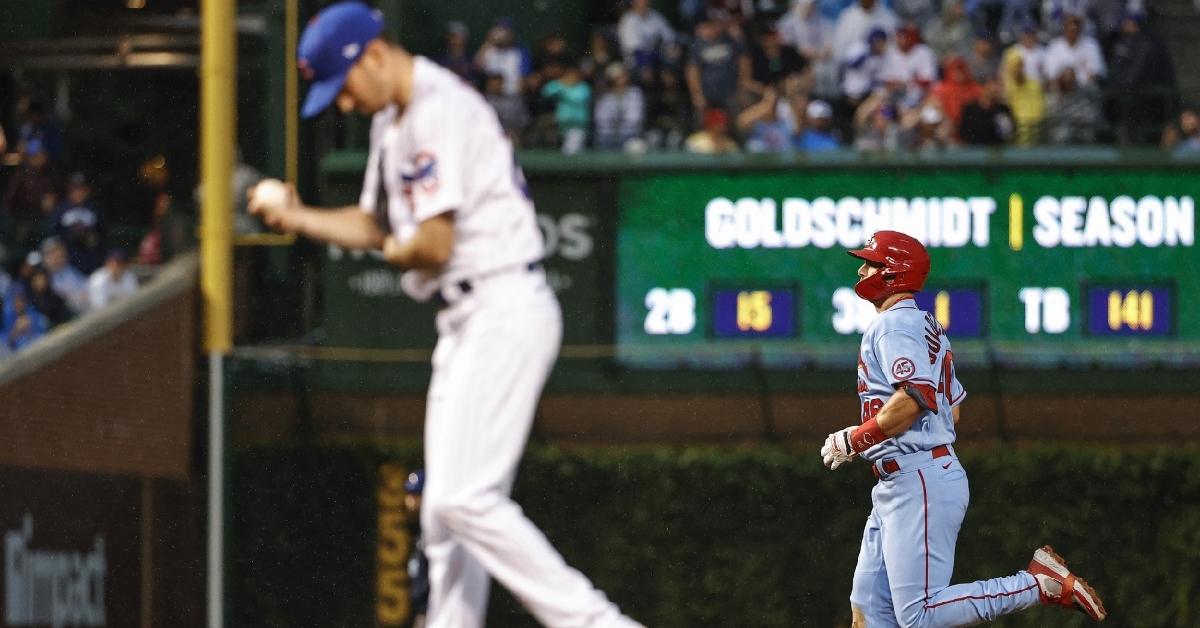 CHICAGO — Going 0-for-8 with runners in scoring position and getting outhit 11-6, the Chicago Cubs (44-46) took a step back following their 10-run showing on Friday and failed to score on Saturday. The Cubs were blanked 6-0 by the St. Louis Cardinals (44-46) at Wrigley Field, with the Cards scoring five of their runs via three homers. Zach Davies lasted just 4 1/3 innings in a mediocre start, and the North Siders suffered their third shutout defeat in a span of three days.

Davies walked Paul Goldschmidt and Tyler O'Neill in the first, and Matt Carpenter plated Goldschmidt with a two-out base knock. Kwang Hyun Kim started on the bump for the Redbirds and forced Javy Baez to bounce into an inning-ending double play after giving up back-to-back singles to Kris Bryant and Anthony Rizzo. Paul DeJong singled in the following inning and moved to second a sacrifice bunt by Kim but did not score. A wild pitch on a third strike enabled Nico Hoerner to reach base in the second before Ian Happ grounded into an inning-ending double play.

Nobody loves hitting at Wrigley as much as @MattCarp13 ?? pic.twitter.com/wgDjhlYRgc

Goldschmidt led off the third with a single, and Nolan Arenado then put together a nine-pitch at-bat that featured a couple of defensive highlights. Anthony Rizzo tried to catch a foul ball hit by Arenado to the first-base side and jumped into the protective netting. Rizzo was unable to make the catch, but Baez robbed Arenado of a hit with a diving stop at shortstop. Baez threw to second for the force out, with Arenado beating out the ensuing throw to first. Davies struck the next two batters out to end the half-inning.

Rizzo tried to go into the stands! pic.twitter.com/pG5GHT2TFI

With two outs in the third, Willson Contreras singled for his 500th career hit. Then, with light rain falling, a walk of Bryant gave way to a Rizzo flyout. Dylan Carlson nearly botched the catch in right but was able to snag the ball just before it reached the ground. Bader singled and stole second in the fourth. Second baseman Nico Hoerner struggled to pull the ball out of his glove after fielding a ball put into play by Kim with two outs. Kim was credited with an infield single, and Bader advanced to third on the play. Carlson left them both stranded by popping out.

Baez led off the home half of the fourth with an infield single and scurried to second on a wild pitch. He did not score, though, and the Cardinals then took control of the contest with a five-run fifth. Goldschmidt led off the frame by hammering a 441-foot bomb out onto Waveland Avenue. The dinger to left was the first of three long balls for the Cardinals in the inning. O'Neill hit a one-out single that chased Davies from the game and stole second with Adam Morgan on the mound. Morgan then gave up a 422-foot jack to left off the bat of Tommy Edman.

HE HIT IT TO WAVELAND ?????? pic.twitter.com/hi5XhpmboB

Another Cardinals homer in the 5??th!

STL is now up 4 on the Cubs ?? pic.twitter.com/eIColQRLrh

Bader tallied a single with two away, and Daniel Winkler was brought out of the bullpen. On just the second pitch of Winkler's outing, DeJong smacked a 402-foot blast that landed in the basket atop the wall in center. Keegan Thompson issued a one-out walk to Goldschmidt in the sixth but prevented the Cardinals from adding to their lead. Kim finished off his solid start with a scoreless sixth. Baez singled with two outs, and catcher Yadier Molina then committed an error by failing to catch a foul ball hit by Patrick Wisdom. However, Wisdom did not take advantage of the reprieve. Instead, he hit a dribbler out in front of the plate that resulted in a putout at first.

The Cards poured it on the Cubs in the 5th with 5 runs off 3 dingers ?? pic.twitter.com/A2kIXgDMHO

Molina hit a single off Thompson in the seventh and then shared a funny moment with Baez, his close friend and teammate on the Puerto Rican National Team, at second when playfully pawing at Baez's glove to avoid being tagged out. Bader grounded into the fielder's choice, with Molina being called out for leaving the basepath, and DeJong grounded out after that, giving Thompson another scoreless frame in the books. Hoerner led off the bottom of the seventh with a double off Genesis Cabrera but never made it beyond second.

Third baseman Sergio Alcantara made a nice throw to first that outed the speedy Edman to lead off the seventh. However, he committed a throwing error to first after fielding a Goldschmidt grounder with two outs in the eighth. Baez bailed Alcantara out by once again robbing Arenado of a hit, as he showed off his athleticism by snagging a line drive for the third out. Giovanny Gallegos retired the Cubs in order in the eighth, and Rex Brothers, who also pitched the eighth, tossed a 1-2-3 ninth. John Gant toed the rubber in the bottom of the ninth and worked around a leadoff walk of Rafel Ortega, thus securing the Cardinals' 6-0 shutout victory.