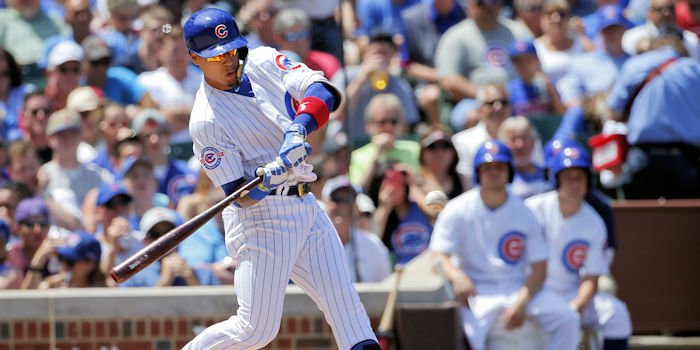 CHICAGO -- The Chicago Cubs thumped the Los Angeles Dodgers 7-2 to win three out of four games in the series on a gorgeous Thursday afternoon at Wrigley Field.

Cubs infielder Javier Baez got the party started quickly as he had an RBI single to center field and scored Anthony Rizzo and catcher Miguel Montero had an RBI groundout to score Soler to put the Cubs up 2-0 in the first inning.

Baez continued to impress offensively with a two-run dinger (3rd overall) that went 413 feet which added to the Cubs lead at 4-0 in the fourth inning.

The Cubs continued their power display in the fifth inning as Jason Heyward and Kris Bryant hit back-to-back solo homers. Bryant's monster home run hit off the left-center scoreboard as it went 436 feet and had an exit velocity of 109.6 MPH. He has been blazing hot lately with six homers and 14 RBIs in his last 13 games. On the season, Bryant has 13 homers and a gaudy 40 RBIs.

Rizzo didn't want to miss out on all of the action has he hit his twelveth homer of the season in the eighth inning to put the Cubs up 7-2. The Cubs are 29-5 when they hit at least one homer in a game.

Kyle "The Professor" Hendricks had an impressive outing going eight innings scattering three hits, two runs, a walk and six strikeouts. He has now thrown at least five innings in twelve straight starts and his season ERA is now lowered to 2.84 overall and 1.99 at Wrigley Field.