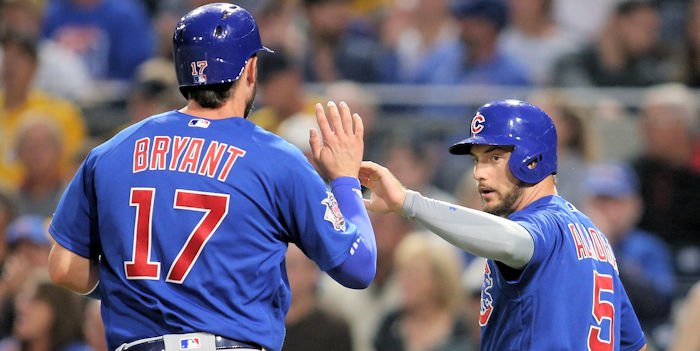 Despite early success at the plate, the Cubs went cold in the second half of the contest. (Photo Credit: Charles LeClaire - USA Today Sports)

PITTSBURGH – The matchup between the Chicago Cubs and the Pittsburgh Pirates, two National League Central rivals, was effectively a tale of two games for the Cubs, as the North Siders were solid at the plate in the early goings, only to go ice-cold at the dish in the latter half of the contest. Failing to have a man reach base after the fourth inning, the Cubs squandered an early lead en route to falling to the Pirates by a final score of 4-3.

The Cubs collected eight hits on the evening, with all of them coming in the first four innings. Chicago got off to a hot start against Pittsburgh starter Steven Brault, scoring a run in the opening inning after two singles in the first two at-bats. Leadoff hitter Jon Jay came into score from third on a one-out sacrifice fly by second baseman Ben Zobrist to put the Cubs up 1-0.

As for the Pirates, they were solid to start the night, too, scoring two on Cubs starting pitcher Kyle Hendricks in the second frame. Third baseman David Freese hit a one-out single that was followed up by a two-run blast by rookie outfielder Jordan Luplow, the second dinger of his career. With the exception of that shot, Hendricks fared well in his 6.2 innings on the hill, giving up just five hits and walking no one.

Brault, on the other hand, never quite settled into a rhythm, getting pulled after giving up eight hits and three runs in five innings. The third inning marked the pinnacle of Brault's struggles, as the Cubs accrued four singles to tack on two runs and go up 3-2. With runners on second and third and one out, Cubs second baseman Ian Happ amassed his 54th and 55th RBI of the season on a two-run single to right-center that scored center fielder Albert Almora, Jr., and third baseman Kris Bryant.

Chicago had one more opportunity to score and thereby pad its lead when Bryant hit a one-out double toward the wall in center in the top of the fourth, but Bryant was left stranded, marking the beginning of the Cubs' offensive woes. Pirates reliever Wade LeBlanc pitched three scoreless innings, in which he essentially dominated the Cubs' hitters.

Cubs reliever Carl Edwards, Jr., was the opposite of LeBlanc and far from effective, allowing the game-tying and game-winning runs to score in the bottom of the eighth. After walking the leadoff batter, Edwards gave up two straight singles, the latter of which scored pinch hitter John Jaso from third. Edwards then threw a wild pitch that later allowed second baseman Max Moroff to score on a single to center by David Freese.

Going up three up, three down in the ninth, the Cubs offered little resistance in terms of mounting a late comeback, thus solidifying their disheartening meltdown to a divisional foe in the 4-3 defeat. Edwards drew the loss to fall to 3-4, while LeBlanc earned the win to become 5-2, and Felipe Rivero of the Pirates collected his 18th save. Having disappointed in both games in the four-game series versus the Buccos so far, the Cubs will aim to right their own ship by sinking the Pirates' vessel in Game 3 tomorrow night at PNC Park.