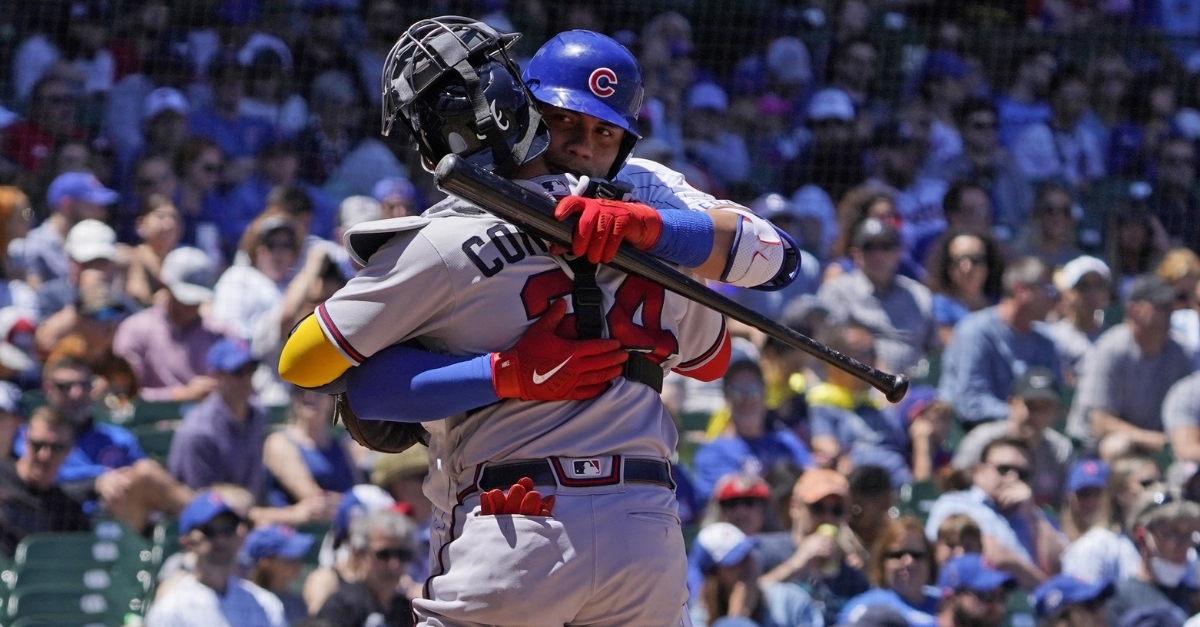 CHICAGO - That is what it feels like to win a series, and all it took was 10 games. After dropping 10 straight games heading into this weekend's series with the Atlanta Braves (37-29), the Chicago Cubs (25-40) put an end to their losing streak on Friday and then doubled down to take the series win on Saturday 6-3.

Whatever Jon Lester told Justin Steele three starts ago, it appears to be working as the left-hander has been dialed in. Despite battling with some command issues on the afternoon, Steele managed to avoid most of the trouble by giving the Cubs five innings of two-run ball to pick up the win.

Steele needed to be on top of his game again as Kyle Wright opposed him and entered the game with a sub 2.7 ERA. Although he gave up five runs on 11 hits through six innings, Wright managed to strike out eight as his ERA rose to 2.94 on the season. Impressive, yes, but that goes to show you how well he has pitched this season.

One thing the Cubs continue to do well with, better than anyone, is scoring runs in the first inning as they lead the MLB with 55 first-inning runs. After Christopher Morel and Willson Contreras led the inning off with singles, the Cubs were in a position to score first again. That came to fruition when Jonathan Villar delivered a two-out single to put the Cubs on top 2-0.

The Cubs extended that lead in the second inning, as a trio of singles led to a 3-0 with Contreras picking up the RBI knock. Add in a Jason Heyward RBI double in the third, and the Cubs owned a 4-0 advantage early.

Despite allowing some early baserunners, Steele kept the Braves off the board as they couldn't get anything going off him. That was until the fifth inning when Steele started to labor and showed the first signs of fading. Not only did Adam Duvall lead things off with a homer, but after a pair of walks and a Michael Harris single, the Braves had the bases loaded with one out.

Hoping to minimize the damage, for the time being, Steele induced a pair of flyouts, including an Austin Riley sacrifice fly that saw the Braves pull within 4-2 before a call to the bullpen. Rowan Wick was the first out of the pen as he desperately searched for a strong outing.

Not only have his last few outings been rocky at best, but he came out to retire the side in order before the offense added another run to go in front 5-2. The Cubs continued that momentum in the seventh inning, with Rafael Ortega ending a long homerless drought to cap off the scoring for the Cubs, with Chicago leading 6-2.

The Cubs managed to put two more runners on base that half of an inning, but couldn't come away with the big hit needed to plate more runs. Scott Effross was next in line to come out of the pen as he took over in the seventh and closed things out in the eighth to keep the Cubs in front 6-2.

With three outs remaining in the game, David Ross called on former Atlanta Brave Chris Martin to finish things. Martin did not get off to the start he was hoping for, allowing a leadoff double to Duvall, giving the Braves a little bit of life. Two batters later saw Harris cash in with an RBI single as the Braves were within 6-3.

That would be it in terms of the scoring for both sides as Martin recovered from allowing that run to retire the next two hitters to preserve the win. Contreras continues to show why he is the Cubs best player right now as he started the game 3-3 before finishing 3-5 with an RBI.

Alfonso Rivas returned to the lineup for Frank Schwindel, who was put on the IL and delivered a multi-hit game in his return, as did Andrelton Simmons from the bottom of the order. Perhaps what stands out the most is that everyone in the starting lineup had at least one hit in the victory.