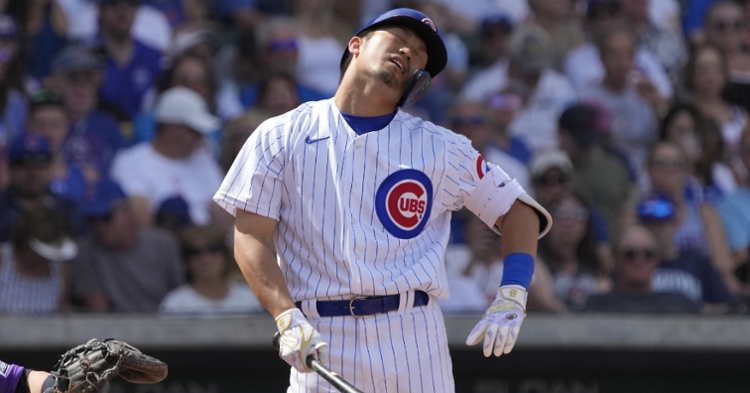 Those two sets amount to four of the Cubs now six spring losses as they don't fare well in those contests. To make matters worse, the offense was near non-existent as they accumulated a total of just three runs across those two games and were outscored 11-3 in the Split squad sweep.

Diamondbacks 6 Cubs 0: Not only did the Cubs get swept on Friday, but they were dealt some bad news as Wade Miley will open the season on the IL with elbow inflammation. To make matters worse, Kyle Hendricks continues to get knocked around as his rough spring continues.

Facing off against Madison Bumgarner, the Cubs defacto ace looks far from an ace, allowing five earned runs in 4 1/3 innings of work. His command continues to be sketchy at best as he walked two and struck out one. Offensively, the Cubs did him no favors as they managed just one hit in five innings off Bumgarner and three total hits in the game.

It took three innings for the Diamondbacks to break through as Dalton Varsho took Hendricks deep in the third for the 1-0 lead, as the Diamondbacks never looked back. That homer seemed to open the flood gates for Arizona as their offense came out swinging in the fourth.

Not only did Christian Walker connect for a solo shot to make things 2-0, but Hendricks allowed two more homers in that inning, with Pavin Smith hitting a two-run shot while Drew Ellis took one over the fence for a solo shot putting the Diamondbacks up 5-0. That was the beginning of the end for Hendricks, as his spring has to be worrisome for fans at this point.

While Hendricks may have struggled, the bullpen continued to pitch well, with Daniel Norris keeping his strong spring going throwing 1 2/3 scoreless frames with a pair of punchouts. Chris Martin was next in line, as he allowed one run in one inning of work, with Buddy Kennedy adding an RBI double to extend the lead to 6-0.

The Cubs also saw David Robertson make his spring debut as the veteran right-hander struck out a pair in one inning of work. Patrick Wisdom, James Triantos, and Illderamo Vargas accounted for the hits in what was a quiet afternoon.

Brewers 5 - Cubs 3: While one of the split-squad games was rather ugly, the Cubs were much more competitive in their other, although the results were the same. With Miley slated to start the season on the IL, Keegan Thompson has a grand opportunity to make the rotation out of camp.

Thompson has had a great spring, posting a 1.80 ERA thus far, which included one run in three innings of work today while striking out five. That run came in the second inning when Rowdy Tellez got into one and took Thompson deep for a solo shot to make things 1-0 Milwaukee.

Opposing Thompson was Luis Perdomo, who allowed just two hits in two innings of work to lower his Spring ERA to 1.23. While Thompson has looked great all spring, Adrian Sampson hasn't, and that continued on Friday with another horrific outing.

His first inning of relief was very good, but things came unglued in the fifth when Sampson was roughed up for four earned runs. Two of those runs came on the Pedro Severino two-run shot, as homers were an issue for the Cubs on Friday. Tyler Black would add an RBI double later in the inning before Christian Yelich picked up a single to push the lead to 5-0.

Down, but not out, the Cubs started to show signs of life in the sixth when they finally got on the board. With Lucas Erceg on the mound, the Cubs had plenty of traffic on the bases before cashing on a throwing error by the Brewers defense to get on the board. Michael Hermosillo added an RBI groundout later in the inning to pull the Cubs within 5-2 as they started to show signs of life offensively.

Take away that rough fifth inning by Sampson, and the Cubs pitching was strong again, allowing just one run across those other seven innings. Ethan Roberts (1 1/3), Manny Rodriguez (2/3), and Rowan Wick (1) totaled three innings of relief, allowing just one hit and three punchouts.

They gave the offense a chance, but the Brewers pitching was able to match them pitch for pitch. Alexander Canario made things more interesting with his solo shot in the ninth, but that was all the Cubs would get as they fell to Milwaukee 5-3.