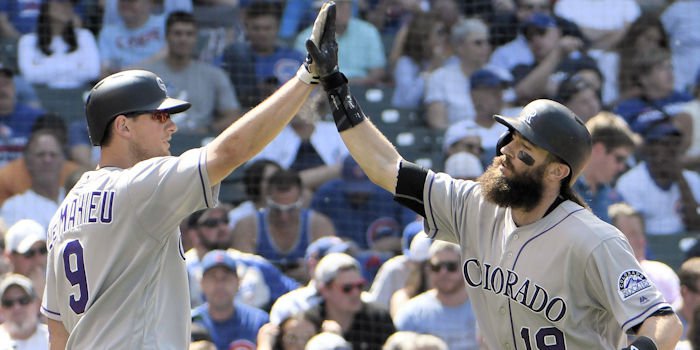 Chicago had its chances Friday, leaving eight on base, but once again had trouble hitting with runners in scoring position – a paltry 1-for-11 – and only registered one hit with two outs.

The Cubs started the home stand strong sweeping St. Louis and taking the first two from Miami – a season-high five game winning streak – but have now lost three in a row and can only hope to break even in the series with the Rockies.

A two-out walk to Anthony Rizzo in the first gave the Cubs life in the first. Ben Zobrist followed with a single center and both runners came around to score on a single by Jason Heyward and a misplayed ball by center fielder Charlie Blackmon, giving Chicago a 2-0 lead

The lead didn’t last long, however. Ian Desmond led off the second with a single to right field and scored when Ryan Hanigan belted a 1-1 pitch over the left centerfield wall to tie the game at 2-2.

Cubs’ starter Mike Montgomery, who replaced Kyle Hendricks in the starting rotation – only lasted four innings giving up two runs – both earned – on three hits and two walks in his first start of the season. He threw 73 total pitches – 43 for strikes – and struck out five.

The Rockies broke the tie in the fifth on a two-run shot to right field by Blackmon off of reliever Seth Frankoff to give Colorado a 4-2 lead. Frankoff was just called up from Triple-A Iowa Thursday night to make his major league debut. Kris Bryant led off the fifth with a walk, advanced to third on a Rizzo single to right field, but was thrown out at home on a roller to third. Rizzo advanced to third and scored on a grounder to second by Heyward, cutting Colorado’s lead to 4-3 after five innings.

Colorado extended its lead back to two runs with a two-out single to left field Nolan Arenado to make it a 5-3 game in the seventh inning.

Chicago had its chances in the ninth loading the bases with just one out, but Zobrist flew out for the second out without advancing a runner and Heyward struck out to end the game.