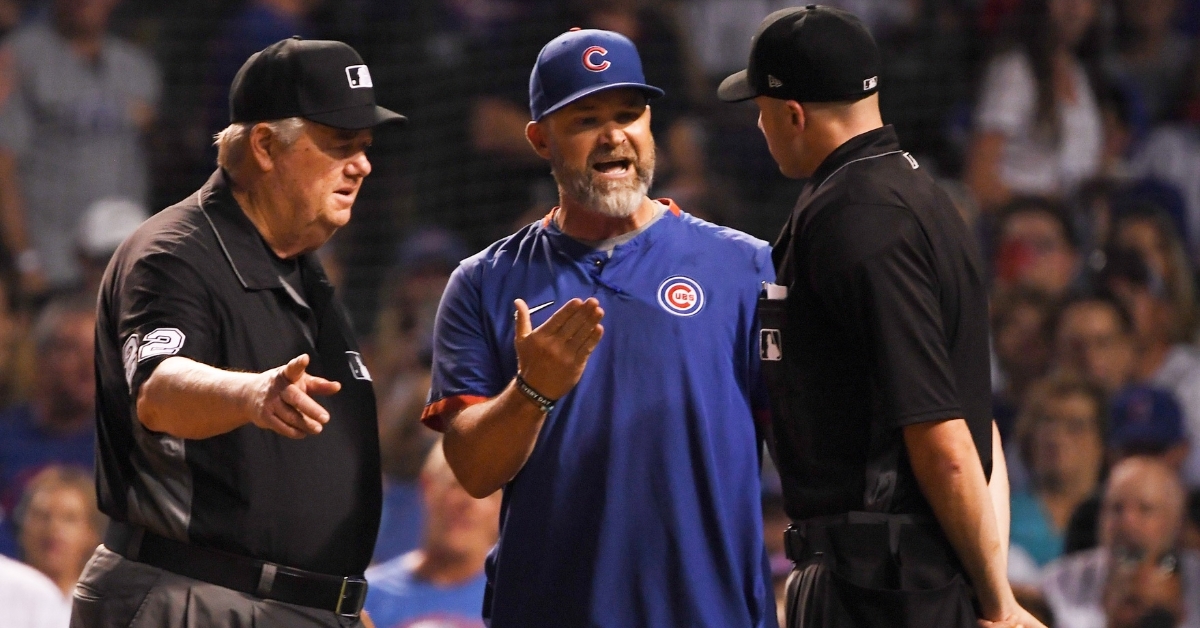 CHICAGO — For the first time since 2012, the Chicago Cubs (42-43) are in the midst of a double-digit losing streak. The North Siders dropped their 10th in a row in the opener on Monday, with the Philadelphia Phillies (40-42) scoring nine runs in the final two innings and winning 13-3. The Cubs returned home to Wrigley Field following a disastrous 1-9 road trip and fell below .500 for the first time since mid-May by losing to the Fightin' Phils, who homered five times on the evening, in the opener of a four-game set.

The Cubs got off to a promising start, with Javy Baez making a flashy stop at shortstop when Bryce Harper swatted a hard-hit grounder in the top of the first. Baez stepped on second for a force out and threw to Anthony Rizzo at first to complete the inning-ending 6-3 double play. However, the Cubs' recent hitting struggles with runners in scoring position came to fruition in the bottom of the first, as the Cubs loaded the bases with one out but could not score. Matt Moore tallied back-to-back strikeouts to desert the three baserunners.

Javy with the glove work! pic.twitter.com/csoY7BcBGT

Zach Davies worked around a leadoff double by Andrew McCutchen in the second frame, and Jake Marisnick then put the Cubs on the board with a leadoff homer in the home half of the same inning. The 416-foot blast carried out to straightaway center field. Andrew Knapp responded with a leadoff jack of his own in the third, as he powered a 402-foot dinger out to right. Kris Bryant began the bottom of the third with a single, and he scored from first on a one-out double from Baez. The two-bagger, which was drilled out to the wall in right-center, was scorched off the bat at 116.7 mph, marking the hardest-hit ball of the season for the Cubs and the hardest-hit ball of the Statcast era for Baez.

Well, would you look at that.

At 116.7 MPH, this is the hardest hit ball for Javy in the Statcast era.#CubTogether pic.twitter.com/CD2RHzeuH7

Didi Gregorious tied the game at 2-2 by homering to right with two away in the fourth. Nico Hoerner singled in the fourth for his first hit since he returned from injury, and a sacrifice bunt by Davies moved Hoerner to second. With two outs, second baseman Jean Segura committed a fielding error when he mishandled a grounder hit by Willson Contreras, but he recovered in time and gunned down Hoerner at the plate. Knapp applied the tag on Hoerner well out in front of the dish.

Alec Bohm hit a leadoff double, which was ruled a foul ball prior to a successful Phillies challenge, in the fifth and advanced to third on a sacrifice bunt by Knapp. Brad Miller pinch hit for Moore after that and collected a walk. However, Davies left the two runners stranded at the corners by drawing a popout and a flyout in the next two plate appearances. Connor Brogdon retired the Cubs in order in the fifth, and Rex Brothers relieved Davies at the start of the sixth.

The momentum shifted in the Phillies' favor following a leadoff walk of Harper that kicked off the sixth inning. David Ross was unhappy with the call on ball four and was subsequently ejected by home plate umpire Nic Lentz for arguing the ruling from the dugout. While the pitch was low, it was a borderline pitch on a full count that Ross might have felt Lentz was compelled to call in favor of Harper after the superstar slugger voiced his displeasure with the previous pitch, a borderline strike that caught the outside corner. Andy Green acted as the Cubs' manager for the remainder of the game.

The whole interaction as David Ross got ejected for arguing balls and strikes on a full-count walk to Bryce Harper pic.twitter.com/iBLj9EGonP

After Harper's aforementioned base on balls, McCutchen plated Harper with a go-ahead double hit into the left field corner. Brothers struck out Gregorius, and Keegan Thompson then replaced him on the bump. Rhys Hoskins scored McCutchen with a base knock to center, increasing the Phillies' lead to 4-2. In the sixth, Brogdon again went 1-2-3 through the lineup, and Thompson did the same in the seventh. Jason Heyward hit a single off Archie Bradley with one out in the seventh, but Contreras proceeded to ground into an inning-ending 4-6-3 double play.

The Phillies took total control of the contest via a six-run eighth. They began by loading the bases with Adam Morgan on the mound before the Cubs recorded an out. Kohl Stewart relieved Morgan at that point, and Hoskins grounded into a fielder's choice on Stewart's first pitch. A chopper hit right to Eric Sogard at third led to the force out at home being recorded. Stewart walked Bohm to bring McCutchen across but then struck out Knapp.

Sogard prevented the Cubs from getting out of the top of the eighth by booting a bouncer put into play by pinch hitter Ronald Torreyes. Gregorius and Hoskins scored because of the fielding error, and Odubel Herrera then cleared the bases with a 411-foot three-run round-tripper to center, which brought Bohm and Torreyes in to score. Baez skied an opposite-field home run with two outs in the bottom of the eighth. The 407-foot bomb soared into the right field bleachers.

Pitching for the fifth time on the year, Sogard toed the rubber in the ninth and gave up a two-run homer to Hoskins and a solo homer to Bohm. Hoskins belted a 441-foot no-doubter out to straightaway center, and Bohm homered to right in the ensuing at-bat. With former Cub Brandon Kintlzer pitching, Hoerner hit what was initially ruled an automatic double with two outs in the ninth. However, Hoerner was sent back to first because the ball bounced off the netting and back into play, meaning the play was incorrectly blown dead. Kintzler then struck out Cubs newcomer Robinson Chirinos, who was signed earlier in the day, to finish off the 13-3 romp.