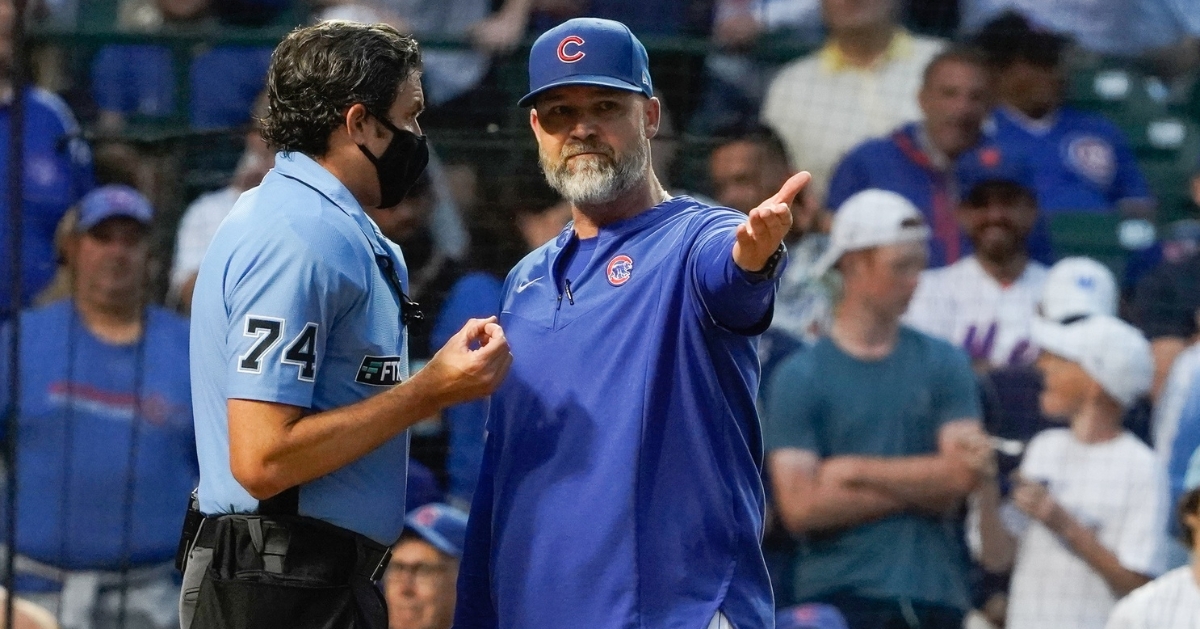 CHICAGO - The Chicago Cubs (34-57) can't buy a win right now as their losing streak has reached nine games. After falling to the New York Mets (58-34) in game one of Saturday's doubleheader in extra innings, the Cubs had to face Mad Max Scherzer for the nightcap, where things could have gotten ugly.

Despite Scherzer striking out 11 Cubs on the night, Chicago continued to show the fight David Ross instilled in his group as they managed to get game two into extra innings. However, just like in game one, the Cubs could not come out on top as the Mets completed the doubleheader sweep at Wrigley Field Saturday with a 4-3 win in 10 innings.

While everyone knows what Scherzer brings to the table, even if this was just his third start since returning from the IL, the Cubs are trying to figure out what they can get out of Drew Smyly the rest of the way. After being one of the team's more consistent starters the first month of the season, Smyly has been in a rough patch for quite a while, including an oblique strain that saw him hit the IL.

Now back and healthy, all eyes will be on Smyly for the next two weeks as he continues to be a potential trade candidate for the Cubs as they continue to rebuild this roster. Unlike Scherzer, who is not on a pitch limit, Smyly is not one of those guys who can give you 100 plus pitches, as he gave the Cubs just 4 1/3 innings.

Despite that, he was outstanding, allowing two runs (one earned) on five hits with one walk and four strikeouts. He gave way to a bullpen that was forced to work overtime in both games Saturday, which started with Anderson Espinoza and his 2 2/3 scoreless frames before Scott Effross, Steven Brault and Mychal Givens all saw action.

As expected, the Mets lived and died by Scherzer on Saturday as the right-hander looked as good as ever. Even though this was only his third start since returning from the IL, you would have never guessed it as he lowered his ERA to 2.22 following 6 1/3 innings of two-run eight ball while adding 11 strikeouts in the no-decision.

Smyly couldn't have asked for a better start, as he struck out the side in the first and had four strikeouts through two innings of work. After that, he was unable to record a strikeout as that has been a common theme for him all season. Even with that good start, Smyly had to work extra hard in the second as a walk, and a hit by pitch was paired with an Eduardo Escobar double to load the bases, only to see the Mets come away empty.

While the Mets could not cash in with that excellent scoring chance, the Cubs managed to get to Scherzer first, taking the lead in the bottom of the second. Frank Schwindel got things started with a leadoff double before an Alfonso Rivas double put runners on the corners with one out. That was followed by a Yan Gomes double to put the Cubs in front 1-0, but the Cubs wasted a chance to get more and came away with just one run.

The Mets responded in the top of the third with Brandon Nimmo leading things off with a single and advancing to third later in the inning off an error. That error proved costly as the Francisco RBI groundout pushed the tying run across to bring things back to even. That was followed by an Escobar solo shot in the fourth as the Mets suddenly took a 2-1 lead.

At this point in the game, Scherzer started to settle in as he not only struck out the side in the third, but turned right around to record three more punchouts in the fourth. Even then, Patrick Wisdom picked up a double before trotting home on a Gomes single as the Cubs continued to battle 2-2.

Unlike those typical 11 strikeout games from Scherzer, this was unusual as the Cubs hit him somewhat hard and had plenty of chances to get more runs. However, when you struggle to drive guys inconsistently, it is hard to capitalize on your opportunities, which the Cubs have struggled doing all season.

With the score still tied in the eighth and Scherzer officially out of the game, it was up to both bullpens to keep things tied as the Cubs pen was already off to a great start. Effross had a dominant eighth inning by striking out the side, while Colin Holderman looked good across his 1 2/3 innings.

Making his season debut in the ninth was Brault, who was signed as a free agent this offseason and then missed the first three months with an injury. Granted, it was only one inning, but Brault did what Brault does by inducing three groundball outs to get things to the bottom of the ninth. Gomes managed to work a walk in the bottom of the ninth, but nothing came from it as the game was off to the 10th tied 2-2.

After suffering the loss in game one, Givens was back to pitch the 10th in game two. What started with a Marte single to put two men on quickly became a nightmare as an intentional walk loaded the bases for Pete Alonso. For the most part, the Cubs kept Alonso quiet in game two, but when it mattered, he did what he needed to give the Mets the lead as he was hit by a pitch to bring in the go-ahead run and kept the bases loaded.

Givens managed to bounce back by inducing a double play, but a costly throwing error later in the inning allowed another run to score as the Mets took a 4-2 lead into the bottom of the 10th. Back on for his second inning of work was Yoan Lopez, who picked up a strikeout Nelson Velazquez strikeout to open the 10th.

Like Givens, Lopez would walk Nico Hoerner to load the bases bringing Frank Schwindel to the plate. That was followed by a Christopher Morel single to make things 4-3 before the Seiya Suzuki single put runners on the corners with just one out. After battling in the count, Schwindel summed up the Cubs season as he bounced a one-hopper over to third for the game-ending double play as the Cubs fell 4-3 and have now lost nine straight.

Suzuki had the hot hand in this one, coming away with three hits to raise his average to .271 on the season. Gomes added two hits with his two RBIs, while five other players had one hit in the loss.