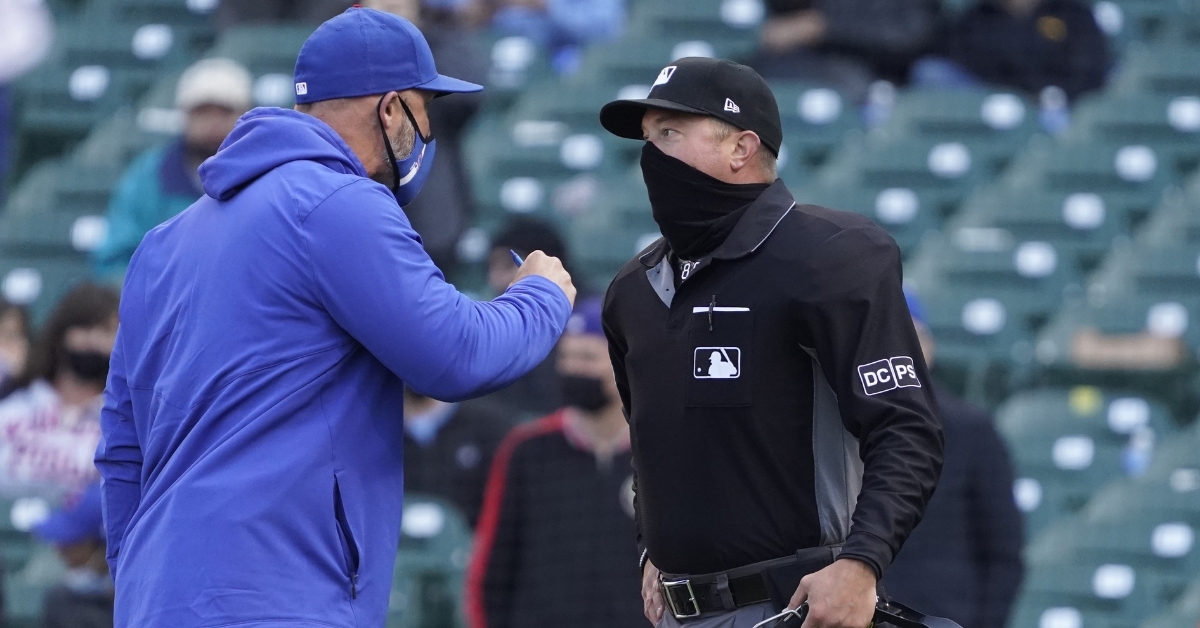 CHICAGO — A squandered 2-0 lead and a ninth-inning ejection of David Ross underscored the four-game winning streak boasted by the Chicago Cubs (10-10) at the start of the weekend ending in deflating fashion on Saturday. The Milwaukee Brewers (12-8) pulled out a 4-3 win in the second installment of a three-game series at Wrigley Field. Nico Hoerner slapped a two-run double down the third baseline in the second inning, but a solo homer by Jason Heyward in the eighth frame was the lone run scored by the Cubs the rest of the way.

Adbert Alzolay was recalled earlier in the day and started on the mound for the North Siders, striking out seven in 4 2/3 innings of work. He gave up a leadoff double to Kolten Wong to open the game and walked Omar Narvaez in the ensuing plate appearance. However, he buckled down after that and prevented the Brewers from scoring in the first, despite them having men on second and third with one out. Anthony Rizzo drew a two-out walk in the first and stole second before Kris Bryant struck out looking on a full count.

After Alzolay struck out the side in the top of the second, and the Cubs took the lead in the bottom of the second. Matt Duffy hit a leadoff single off Freddy Peralta and was outed at second on an ensuing fielder's choice hit into by Jason Heyward. Eric Sogard poked a chopper through the infield, advancing Heyward to third, and Hoerner followed that by doubling to left. Both runners scored on Hoerner's two-bagger. Bryant hit a double of his own with two outs in the third but was left stranded.

Sogard laid down a perfect bunt for an infield single in the fourth. Other than that, the Cubs did not experience much offensive excitement in the middle innings. Keston Hiura led off the fifth with a double, and Rex Brothers relieved Alzolay after he walked a batter with two outs. He proceeded to issue two walks in a row, with a walk of Narvaez forcing home Hiura. Brothers then hit Tyrone Taylor with a pitch to bring Corey Ray across and stopped the bleeding by striking out Shaw.

A leadoff single in the fifth by Ian Happ was followed by two straight groundouts. Happ reached third base, but Bryant flied out to conclude the scoreless inning. Hiura singled with one out in the sixth and took second thanks to a wild pitch. With two outs and runners on the corners, Ray grounded out, as Brandon Workman escaped the jam. The Cubs put two men on in the sixth but were unable to retake the lead. The Brewers took advantage in the seventh with a two-run dinger hit by Manny Pina off Andrew Chafin. The go-ahead jack scored Wong, who led off the inning with a base knock.

Chafin committed a fielding error after getting taken deep, and Ryan Tepera eventually finished the half-inning on the mound. Heyward pulled Chicago within one of Milwaukee by way of a 418-foot solo homer hit out to center in the eighth. Devin Williams gave up the round-tripper. Josh Hader closed out the 4-3 Brewers win in a controversial bottom half of the ninth. Following a leadoff walk drawn by Hoerner, the first pitch to Jake Marisnick was clearly high but called a strike, nevertheless. Ross argued the call and was tossed by home plate umpire Cory Blaser. Hader struck Marisnick out on three pitches and next fanned Happ. A Willson Contreras ended both the game and the Cubs' winning streak.