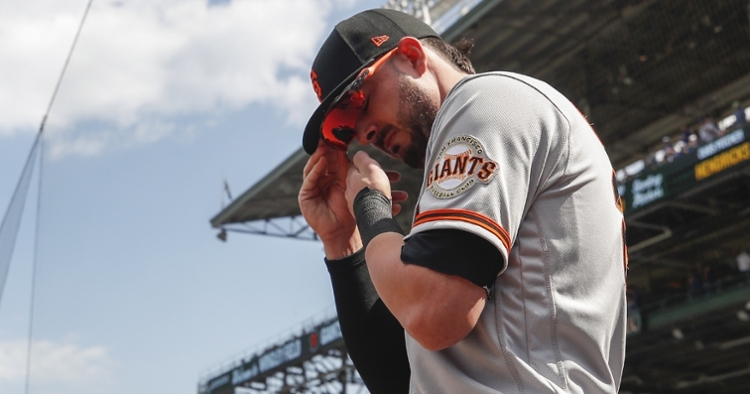 CHICAGO – Friday was a very emotional day at Wrigley Field as it was a bit of a homecoming in more ways than one. Along with the Chicago Cubs (65-77) welcoming in the MLB best San Francisco Giants (91-50), it was a return to Wrigley Field for the likes of Tommy La Stella, Tyler Chatwood, Jose Quintana, and most importantly, Kris Bryant who played his first game in front of the fans as a visitor.

What started as a pitchers' duel, as you would expect when the Giants are playing, turned into a one-sided win with the Cubs bullpen allowing five runs across the game's final three innings. That would be more than enough for the Giants as they continued to play inspired baseball with a 6-1 win. The Win moves the Giants to 4-1 against the Cubs as they have guaranteed themselves a season series win.

While the Giants elected to go with one of possibly two bullpen type of games this weekend, the Cubs handed the ball to the Professor Kyle Hendricks, who was looking for a bounce-back start after two terrible outings. Hendricks did more than his share to lead the Cubs to a victory going six strong innings allowing just one run on four hits in the process. Hendricks walked two and struck out four as this was his 19th quality start of the season, tying him for fourth in all MLB.

In 36 career September starts, Kyle Hendricks has a 2.56 ERA. pic.twitter.com/9lT84W7pIS

Even though the Giants went with a bullpen-style game, it worked in their favor as no pitcher went more than two innings. That meant that the Cubs hitters would be getting a different look with every at-bat, which can make things tough on anyone. After being held hitless through three, Frank Schwindel picked a perfect time to collect the Cubs first hit as he took a fastball out of the zone and drove it over the left-center field fence for the 1-0 Cubs lead. It was his 12th homer of the season and ninth since August 13th as he trails only his teammate Ian Happ for most homers since that day.

Schwindel picked up a second hit later in the ball game as he was responsible for both Cubs hits while also working a ninth-inning walk. While the Giants were able to silence the Cubs bats most of the game, Hendricks did the same through five-plus innings until Lamont Wade Jr cashed in with an RBI single in the sixth to tie things up 1-1. Wade was thrown out trying to reach second on the play, but the bottom line was that the Giants were able to grab the lead while chasing Hendricks in the process.

As the Giants bullpen continued to mow through Cubs hitters, it was time for the Cubs pen to match that with Trevor Megill called upon to pitch the seventh. Things didn't go as planned for Megill as he not only Brandon Crawford single but allowed a long Evan Longoria two-run shot that saw the Giants grab the lead for good. Megill allowed one more hit to go with a walk as all four batters he faced reached base.

Michael Rucker was next out of the pen and, despite picking up a huge double play to partially kill the Giants rally, saw Brandon Belt drive one into the left-center field basket as the Giants were now on top 5-1. Looking to make some noise in the bottom of the seventh, Willson Contreras took a lead off walk before Crawford teamed with La Stella to complete a ridiculous double play on Patrick Wisdom to kill a rally.

The Giants would add another run-off, Rucker, in the eighth on the Longoria sacrifice fly to make things 6-1. One of the bright spots for the Cubs pen was the return of Tommy Nance, who was added to the roster with Adam Morgan hitting the Bereavement List. Nance went just one inning, but retired the Giants in order needing just nine pitches to do so. Still, it was San Francisco coming out on top with the 6-1 win.

When Bryant was traded to the Giants, everyone circled this weekend on the Cubs calendar as it would mark the return to Wrigley Field for him as a member of his new team. As expected, there was a lot of fun, excitement, and emotions surrounding this day as Bryant spent his first seven years in the Cubs organization.

As if the touching video tribute that left him in tears wasn't good enough, maybe the standing ovation he received in his first at-bat was the icing on the cake. Bryant will forever be remembered as a Cub no matter where he goes, and he finally got to say goodbye the way he wanted to.

Knowing how Cubs fans are when they become attached to players, they did what they were expected to do and showed him the love he showed them for so long.

Classy move of Cubs starter Kyle Hendricks to step off the mound so the fans at Wrigley Field could give Kris Bryant a long ovation pic.twitter.com/z3uohd1hLS

No one knows what the future holds, but you can bet that Bryant will talk with the Cubs this winter about a return. Wrigley is his home, and he will always be part of the Cubs family.

While the Giants don't have the typical lineup you piece together when you think of the best team in baseball, they do get contributions from everyone as only two players have more than 400 at-bats this season. Despite that, this team leads the majors in wins with 91 and have 208 homers as a team which also leads the majors. There has never been a Giants team to lead the league in homers, so to do this with the lineup they have is impressive.

What is even more impressive is what they have done after the seventh inning, which was consummated by pushing across five more runs today. That now makes for 239 runs that this team has scored in the seventh inning or later, near the top of the majors. While this team may not have the star power that some other teams do, they are a great team with virtually no holes.

Their pitching is top-notch, their bullpen is strong, and their offense, although not full of stars, knows how to get the job done. Their five-year playoff drought is about to end, and they are serious contenders to represent the National League in the World Series.

One of the many bright spots on the Cubs this season has been the emergence of Rafael Ortega as not only the everyday leadoff hitter, but as the centerfielder. Entering Friday's contest with the Giants, Ortega was hitting a .286 on the season, including a .311 since the all-star break.

His average has gone down significantly over the past few weeks, but no one will argue with the job he has done this season. However, one glaring weakness for him continues to get exposed, which is the inability to hit southpaws. So far this season, Ortega has mustered a .052 average against lefties and is 2-36 against them this season.

Compare that to his .324 average against righties to go with all 10 homers, and you have a dramatic split difference. Ortega has proven he can handle an increased role in the field, but he will never be an everyday player unless he can learn to hit lefties. That is something he will most likely work on this offseason, and maybe the Cubs will give him another crack at it next season to be the leadoff man they have been missing since Dexter Fowler.