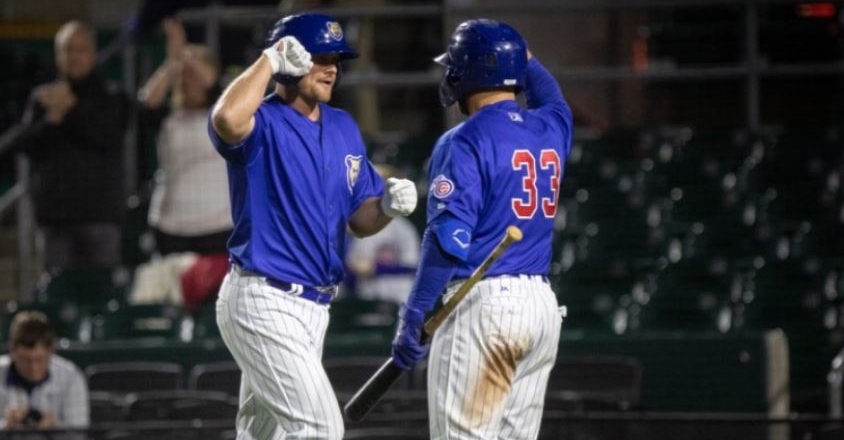 Hicks had three hits in the loss (Photo via Iowa Cubs)

At least there was something to cheer about within the Cubs organization Thursday night. Roughly an hour after the Reds whooped the Cubs 20-5, all four of the Cubs Minor Leauge affiliates were on the field as they were hoping for better fortunes.

For the most part, that was the case as the organization posted a 2-1 record for the night. Had it not been for weather suspending the Myrtle Beach and Augusta game, you were looking at 3-1 with Iowa coming so close to making it a perfect night and giving the fans a breath of fresh air after what they witnessed in Cincinnati.

After coming away with an 8-5 win in their completed suspended game earlier, Iowa was set to face Memphis for their regularly scheduled contest. Looking to continue improving was Cam Sanders, as he was on the bump for the Cubs. Sanders didn't last long, allowing two runs in 2 2/3 innings before Aneuris Rosario was touched up for three.

With both teams held in check through two innings, Narcisco Crook gave the Cubs the lead using an RBI single to put them up 1-0. Moving to the bottom of the third, you had Memphis striking back as Alec Burleson, and Luken Baker picked up RBI singles to give Memphis the 2-1 lead.

This was the beginning of what turned out to be a back and forth affair, with Crook adding a second RBI hit in the fourth before coming home to score on the Dixon Machado to put Iowa back in front 3-2. Still holding that lead in the fifth, Burleson cashed in with a huge RBI double to tie things up and then came home as part of the Cory Spangenberg single that had the Redbirds in front 5-3.

Not about to give up, John Hicks unloaded for his fourth homer of the season in the sixth, and just like that, things were back to even.

Who doesn't love a good bat drop? John Hicks ties it up with this two-run blast! pic.twitter.com/0qHYBj1PGI

Not only were things tied, but after the work that Cayne Ueckert and Erich Uelmen put together across four innings, the Cubs were able to force extras. With Dakota Mekkes on to pitch the bottom of the tenth, Memphis needed just two pitches to claim the victory as Burleson capped off his monster game with a walk-off two-run shot propelling the Redbirds to the 7-5 win.

It took extra-innings, but Memphis won game three of the series to take a 2-1 series lead. pic.twitter.com/tYUku4KivI

With the Smokies getting some extra rest due to a pair of postponements, the rest did them good as they came out firing against Rocket City. Javier Assad continued his incredible season, giving the Smokies five scoreless frames to lower his team-best ERA to 2.90. Assad allowed five hits and struck out seven as he was on top of his game.

While he may have been on top of his game, he didn't need to be as the Smokies offense backed him with plenty of support. Already up 1-0 after Luis Vazquez singled in the first, the Smokies began to open things up in the second using an Alexander Canario double and Bryce Ball single to take a 3-0 lead. Add in the Yonathan Perlaza homer, and the Smokies pushed across four runs to lead 5-0 after two.

Things only got worse for Rocket City, with Vazquez going deep in the fourth and Levi Jordan using a three-run shot in the sixth to bust the game wide open 9-0. The lone run for Rocket City came off Dalton Stambaugh in the sixth inning when Preston Palmiero brought home a run on a double play. Outside of that, they couldn't do anything as Matt Mervis added a bases load walk to cap off the scoring.

With three more hits and three RBIs to lead the way, Jordan is crushing the ball in AA as his season average sits at .397. Jordan wasn't alone when it came to multi-hit games, as Vazquez and Perlaza joined him with two hits.

Led by another strong pitching performance, the Cubs seized control of the series, topping the Loons 5-0. DJ Herz picked up his first win of the season, giving the Cubs five scoreless innings of one-hit ball as his ERA dips to 1.67. Herz gave way to Sheldon Reed, who tossed a pair of scoreless innings in his High-A debut, and Brad Deppermann, who closed things out for the save.

While Herz was doing his thing on the mound, so was Kendall Williams, who nearly matched Herz to allow just one run in five innings. That run came in the third inning when Cole Roederer connected for his first homer of the season, which proved to be the winning run.

And so it begins…. pic.twitter.com/J4riALwHcc

The long ball was huge for South Bend as they connected for a pair of two-run homers from Owen Caissie in the seventh and Yohendrick Pinango in the eighth to pull away.

Pablo Aliendo was the lone Cub to record multiple hits as six other players had one hit in the win.

Looking for their 11th win in a row, the Pelicans were off to a great start until rain forced the game to be suspended in the fifth. All of the Pelicans damage was done in the first two innings, with all six of their runs coming home to score.

Four of those runs came home in the first, with Juan Mora and BJ Murray Jr picking up a pair of two-run shots.

Juan Mora gets us going!

A two-run homer for his third of the season gives the Pelicans a 2-0 lead in the first. #MBPelicans pic.twitter.com/cU0GmC5uhg

And BJ keeps it rolling!

Murray’s third home run of the season is a two-run blast.

Pelicans 4, GreenJackets 0 entering the bottom of the first. pic.twitter.com/lnwmyAshLd

A James Triantos RBI single in the second mixed with a Kevin Alcantara sacrifice fly had the Pelicans up 6-0, which was more than enough support for Tyler Schlaffer, who allowed two runs across his four innings with four punchouts.

Those runs came in the fourth inning off the Mahki Beckstrom homer, and that is where things sit right now as the Pelicans will look to finish them off for their 11th win in a row and try for 12th shortly after. Ezequiel Pagan and Mora got off to great starts picking up two hits thus far.

Thursday's game against the Myrtle Beach Pelicans has officially been suspended and will continue tomorrow night at 6:05 pm.