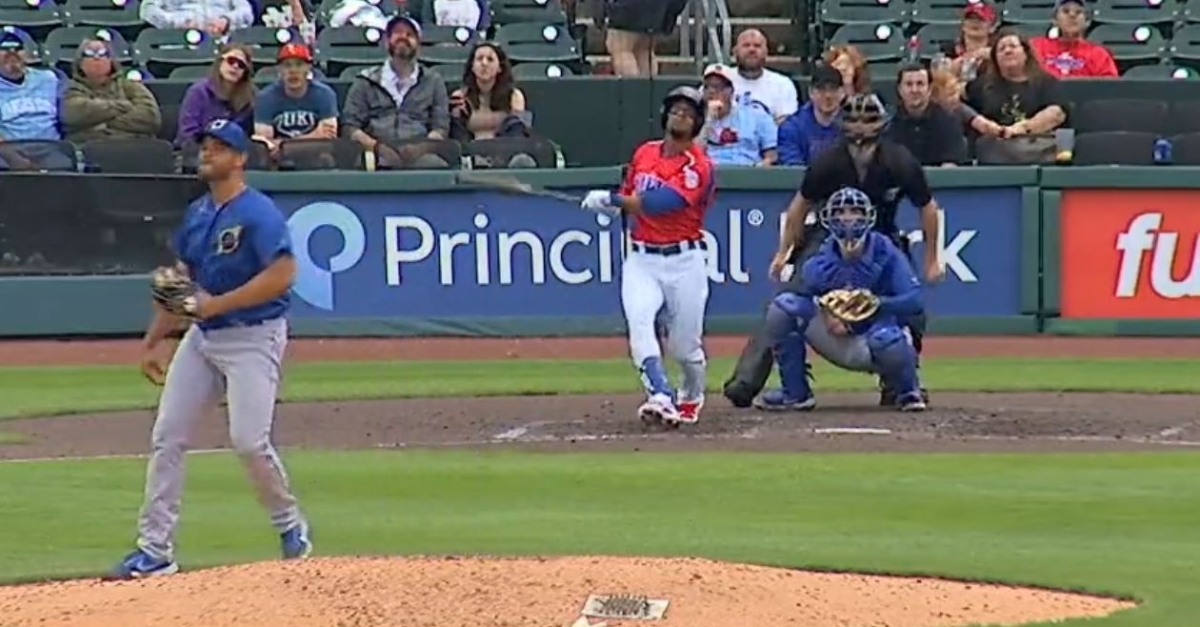 Garcia is on a torrid home run pace

This past week might go down as one of the best weeks in Cubs Minor League history. The Cubs lost five games through five days of action, with one of them falling each day. They continued to up the ante on Sunday as they capped off an already fantastic week with a perfect 4-0 day on the diamond.

It was the first time this season they went a perfect 4-0, and the second time this season, they went perfect, with the last time being a 3-0 showing. Fans are starting to get excited about the minor leagues, and you can see that in the park every night.

The Cubs capped off their six-game series with a 5-1 record against Omaha and gave their best overall performance for Sunday. Not only was it a shutout win, but one where the Cubs allowed just three hits. Matt Swarmer benefited from the win as he allowed two hits in five innings to lower his ERA to 1.85. Swarmer struck out five to earn the win and continues to be one of the biggest surprises in AAA.

Following Swarmer was the bullpen trio of Brendon Little, Bryan Hudson, and Ben Leeper as they allowed one hit over the final four innings to go with three punchouts in the win. After bouncing around between the MLB and AAA the last few years, Kyle Bubic was on the mound for Omaha and got roughed up in 2 2/3 innings.

After allowing a Jared Young RBI grounder and Nelson Maldonado single in the first to put his team behind 2-0, Dixon Machado added an RBI single in the second to chase Bubic with the score 3-0. That score held until the fifth, when Robel Garcia homered for the ninth time of the season after failing to homer for the first time this week on Saturday.

Okay, so he took yesterday off, but Ro-Bombs is back! Robel goes deep for the sixth time this series, extending our lead to 4-0. pic.twitter.com/Te5rPDADfs

Leading 4-0 in the sixth, the Cubs put the game away using a four-run inning to blow things open. Machado drove in the first two with his second RBI single of the day before Maldonado capped off the scoring with an RBI double in the Cubs 8-0 win. Machado and Maldonado paced the offense with two hits and three RBIs, with Garcia and Greg Deichmann also grabbing a pair of hits.

While pitching set the tone most of the night, the Smokies offense was in full swing yesterday as they crushed the Biscuits for their eighth straight win. Brandon Leibrandt was on the mound and gave the Smokies five innings of one-run ball to go with seven punchouts.

Outside of a horrific sixth inning, the Smokies bullpen was solid, and the offense did what they needed to do. Leibrandt was on point early, allowing his only run in the fourth inning on the Grant Witherspoon sacrifice fly. For the Smokies, Jayden Murray had them guessing through three innings before the offense erupted for 10 runs in two innings.

Six of those runs came in the fourth when singles by Chase Strumpf, Christian Donahue, and Darius Hill brought home three runs. There was also a costly fielding error mixed in that allowed for three more runs to score as the Smokies were now in front 6-1.

The fifth inning was the same story, with four more runs coming across for the Smokies. Another error led to the next run coming home, but the three-run shot by Luis Vazquez put the Smokies up 10-1. Not about to go down without a fight, Montgomery used a four-run sixth inning to pull within 10-5 as Austin Shenton picked up an RBI double. That was followed by Jordan Qsar's homer and Roberto Alvarez triple.

A Bryce Ball single in the sixth and the Hill homer in the eighth capped off the scoring as the Smokies completed the sweep of Montgomery 12-5. Hill had a monster afternoon at the plate, going 4-5 with two RBIs to bring his average above .300. Andy Weber added three hits to become the only other player with multiple hits, with Vazquez leading the way with three RBIs.

That is a SEVEN GAME SWEEP ??of the Montgomery Biscuits! SHOW SOME LOVE for your Tennessee Smokies! #SmokiesBaseball #Cubs #ItsDifferentHere pic.twitter.com/TXKEjfe4iS

It is not too often when teams get a 12-game homestand. It is less common to have South Bend's success on this homestand, going 11-1 and capping that off with a 5-1 win on Sunday. Joe Nahas made a rare start, but with some internal promotions could be making a ton more in the coming weeks.

Nahas was brilliant on the mound giving the Cubs six innings of three-hit ball and allowing just one run to take the win. The bullpen trio of Brad Depperman, Eduarnial Nunez, and Hunter Bigge followed suit and tossed nothing but zero's.

Owen Caissie opened the scoring with an RBI single in the second as his recent hot streak continues. Add the game-winning knock from Jordan Nwogu in the fourth, and South Bend had a 2-0 lead, but had no intention of stopping yet.

After Robert Hassell pulled the Tin Caps within 2-1 in the top of the sixth, Jake Washer put the game away as his three-run shot in the bottom of the sixth capped off the scoring with the Cubs rolling 5-1.

A long gone @hoosierlottery Home Run was hammered by @J_Wash10 in the series finale against Fort Wayne yesterday afternoon! pic.twitter.com/91YsTWKLBM

Washer was the man of the afternoon, picking up three hits to go with those three RBIs to lead the way.

As difficult as things were for the Pelicans this weekend, they still finished the series with Charleston 3-3 and remained in first place. They capped off the weekend with a dominant showing taking down the Riverdogs 5-0.

Luke Little continues to mold himself into a starter allowing just three hits in three scoreless innings. Tyler Santana took over for him and improved to 3-0 with a 2.95 ERA after four scoreless innings. Chase Watkins and Sheldon Reed finished things off with four strikeouts across the final two frames.

Despite a strong four-inning start by Patrick Wicklander that saw him strike out seven, he was on the short end of the stick as he left trailing 2-0. Those runs came in his final inning of work, with Kevin Alcantara ripping the eventually game-winning RBI double before coming home to score on the BJ Murray single.

The next inning saw the Pelicans push two more runs across as Pete Crow-Armstrong and Ethan Hearn completed the double steal with an error allowing Armstrong to trot home to double the lead. Murray Jr would cap off the scoring in the seventh inning with another RBI single as the Pelicans take down the Riverdogs in what will be the marquee series this season.

Murray Jr. and James Triantos led the way with a pair of hits, but Murray Jr. had two RBIs to pace the offense.