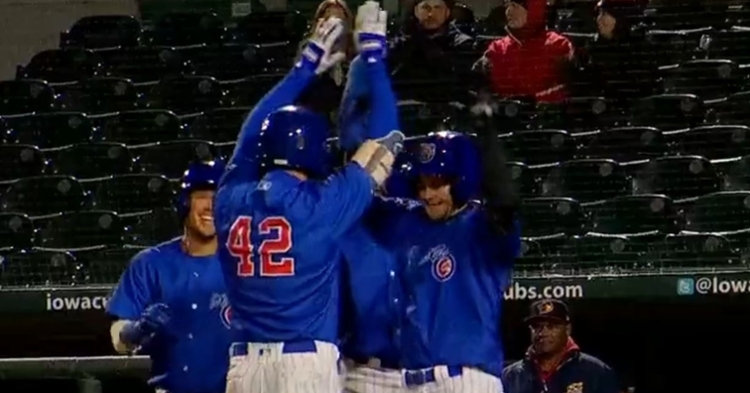 Jared Young blasts a grand slam in the 8th inning

While the Cubs may not have come away with a win, their organization had a great night going 3-1 down on the farm. The Pelicans took the lone loss in what was otherwise a great evening as pitching continues to be the theme of the early season for all leagues.

It has been sweet home cooking for Iowa in their first home series as they took their third game on Friday. This was mainly due to their five-run eighth inning after trailing most of the game.

Caleb Killian was back on the mound for his second start, and despite some command issues, Killian was strong again. Killian got through four innings, limiting the damage as he was charged with one run on three hits to go with two walks and three strikeouts. That run came in the third when Willi Castro singled home the go-ahead run for the 1-0 lead.

That seemed to be more than enough for Beau Brieske and Miguel Del Pozo, as that duo limited the Cubs to just four hits through seven innings while keeping them off the board. Matt Swarmer has to be mentioned when you talk about early-season MVPs for Iowa. Not only did he give the Cubs four scoreless innings of work, but he has yet to allow an earned run this season and has been their best pitcher.

He gave the offense a chance to come back, and they rewarded him with a massive display in the eighth. While Dixon Machado provided the tying hit with a single, Jared Young brought the house down as his grand slam lifted the Cubs to the 5-1 win.

Jared Young gives us the lead with this HUGE grand slam! He is your @EMCInsurance player of the game. pic.twitter.com/20iQViAeek

Machado and Young provided all the offense for the Cubs as they had all four hits and all five RBIs.

Heading into the weekend with a win ?? pic.twitter.com/Pm8bjCSU0H

For the most part, the pitching of Tennessee has gotten off to such a good start, and that continued on Friday. With Ryan Jensen battling through command issues to set the tone, Tennessee struck out 15 batters as a team, five of them going to Brendon Hughes in relief.

Even with his command issues, Jensen was greeted with some early run support as the Bryce Ball double gave the Smokies a 1-0 lead in the first. One inning later saw Darius Hill add to that lead with a single as the Smokies were in business early. That lead went away in the third inning with Evan Edwards taking Jensen deep for the two-run shot tying things up 2-2.

With one down and a man on third, Bryce Windham did what he needed to do as his sacrifice fly gave the Smokies a 3-2 lead. That would be all they would need as Scott Kobos retired the Biscuits in order and struck out two.

Sparked by a big inning of their own, the Cubs rode a strong pitching performance to the win as they moved back to 3-4 on the season. Led by DJ Herz, who dominated in his four innings of work, the Cubs needed one big inning to secure the win.

Herz was near perfect on the evening, allowing just one run, one hit in four innings, and five strikeouts. That run came in the bottom of the fourth after Alexander Canario gave them the lead as things were tied 1-1 after four.

With Eduarniel Nunez summoned as the first option out of the pen, the Cubs offense was looking to back him as they provided him with some major insurance runs in the sixth. In that inning, the Cubs pushed across three runs, with Jordan Nwogu ripping an RBI double before the Yohendrick Pinango groundout proved to be the winning run. Owen Caissie picked up the final RBI in that inning off a single as South Bend led 4-1.

Looking to battle back in their own right, Fort Wayne got one of those runs back in their half of the sixth as Corey Rosler picked up an RBI double to make things 4-2. That would be as close as things would get as South Bend picked up the huge win. Outside of Pablo Aliendo and Matt Mervis, everyone had one hit in a balanced offensive attack.

Although pitching dominated the first three games, that wasn't the story on Friday. Ironically, it also saw the Pelicans get blown out as they fell to Augusta 9-2.

Things started as a good game, but a five-run seventh inning will take any game and flip it upside down. Not only did starter Brendon Little struggle, but so did everyone else, including Frank Scalzo Jr, who took the loss. Despite their 18 strikeouts as a group, Myrtle Beach also walked 11 while all four pitchers allowed at least two runs.

Little was touched up first as a pair of runs in the first off the Adam Zebrowski sacrifice fly, and an error had Myrtle Beach down 2-0 early. Fortunately for the Pelicans, they responded in the bottom of the second, with Reggie Preciado doubling to pull them within 2-1 before the Ezequiel Pagan ground out made things 2-2.

Two innings later, Scalzo Jr took his turn at struggling as he allowed Zebrowski to pick up the game-winning double, putting Augusta on top 4-2. That 4-2 score would hold up for the next several innings before Augusta busted things open in the seventh.

What started with RBI singles from Caleb Durbin and Brandon Mezquita was capped off by a Mahki Backstrom triple as five runs came across to score and finished off the Pelicans 9-2.