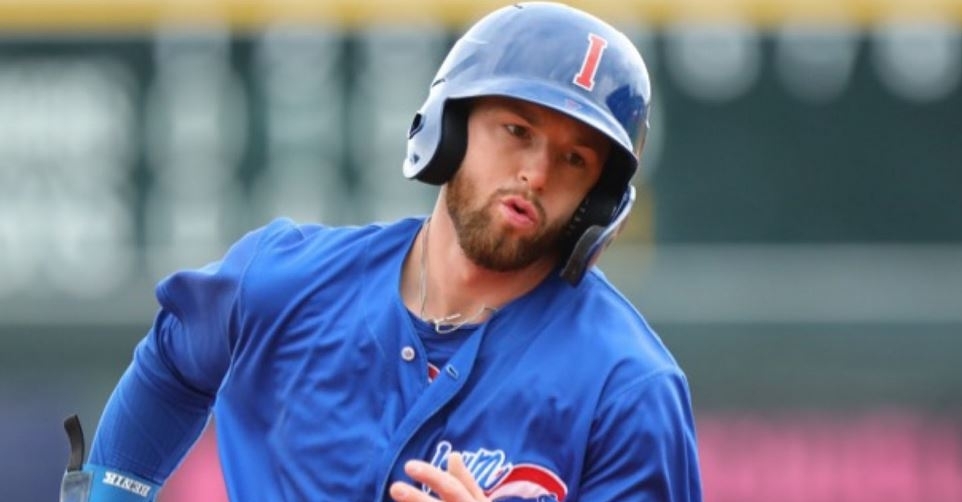 It was an interesting night on the farm Wednesday as three teams were in action. With Tennessee getting rained out for the second straight day, it was up to the other three teams to show what they could do.

Despite posting a 1-1 record on the night with one game suspended, things continue to trend upward for this team as plenty of new faces contributed this week.

No, this game did not end in a tie, but it has been suspended in the eighth inning and will pick up on Thursday before the regularly scheduled contest. Caleb Killian made the start for the Cubs and had some struggles for the first time all season.

He got through five innings, allowing four earned runs on six hits as his ERA rose to 2.06. That doesn't take away from his work this season, as the Cubs are still expected to promote him to the Big League club soon. Most of the damage done against Killian came in a span of two innings after Trent Giambrone gave the Cubs a 1-0 lead in the second with a solo shot.

We'll take that! Trent Giambrone gives us an early 1-0 lead with this solo shot. pic.twitter.com/Wa2oLXBC6y

Memphis responded with a huge fourth inning, which proved to be one of the worst, if not the worst, inning for Killian all season. Not only did Luken Baker tie things up with an RBI single, but Ben DeLuzio continued his massive series with an RBI double that put Memphis in front 3-1.

Paul DeJong added a sacrifice fly in the fifth inning to put the Redbirds up 4-1, as that was the end of the road for Killian. After dominating hitters for so long in AAA, the Iowa offense wanted to do what they could to get Killian off the hook. Not only did a Nelson Maldonado RBI single in the sixth help, but the Cubs scored one run in each of the next three innings to pull even.

Clint Frazier delivered with an RBI single in the seventh before Robel Garcia went deep for his 12th of the season in the eighth and brought things back to even 4-4. That is where things will pick up tomorrow as the Cubs will continue to bat in the top of the eighth.

Play-by-play on a tarp pull? Why not. We are in a rain delay against Memphis, tied 4-4 in the 8th inning at AutoZone Park. pic.twitter.com/bjBXETaBge

Despite a thunderous rally that saw the Cubs score three runs in the bottom of the ninth, it was a little too late, falling 4-3 to the Loons. Jordan Wicks got the start and was on the short end of a tough-luck loss.

Expected to start stretching out, Wicks gave the Cubs five great innings of one-run ball, allowing just four hits and three strikeouts. He gave way to Walker Powell, who tossed the final four innings and was charged with three earned runs, with all of them coming in one inning.

While Wicks was impressive, Kyle Hurt was just a little better going five innings and allowing no runs on two hits with seven punchouts. He gave way to a bullpen that allowed three runs, but none earned while the entire staff punched out 12 Cubs hitters.

Not only were both starters on top of their game, but things were tied 0-0 until the fifth inning when Edwin Mateo connected for an RBI double to give Great Lakes the lead for good 1-0. That 1-0 score not only held up for a while, but looked like it was going to hold until the Great Lakes offense showed up in a big way late.

Looking for some late-game insurance in the ninth, Eddys Leonard doubled the lead with a solo shot as the Loons were looking for more. Imanol Vargas granted them that wish as his RBI single brought home two more runs to extend the lead to 4-0 with just three outs to go.

Even though they were down to their final at-bats, the Cubs refused to go down without a fight, making things very interesting late. With an error starting the inning off on the right foot, Yohendrick Pinango continued his recent double barrage using an RBI double to make things 4-1.

Standing on third and with two outs, Caleb Knight picked the perfect time to hit his first homer as the two-run shot brought the Cubs within 4-3. Unfortunately, that was it for their late-game rally as Fabian Pertuz struck out to end the game. Knight led the way with two hits to go with two RBIs, while Pinango, Jake Slaughter, and Luis Verdugo added the remaining hits.

The #ComebackCubs gave it their best shot, but came up just short in the 9th.

Back to it tomorrow, and see you at Portillo's in Mishawaka tonight for Tip-A-Cub from 5-7 PM! pic.twitter.com/SwIo6wJPQK

Make that 10 in a row and counting as the Pelicans continue to make quick work of their opponents. Led by Luis Devers and his five innings, the Pelicans used a trio of crooked innings to put away the Greenjackets and improved their minor league-best 30-11 record.

Devers was strong across his five innings, walking three and striking out seven while allowing just three hits and handing things off to the pen. That was critical for the Pelicans success as the trio of Adam Laskey, Frank Scalzo Jr, and Chase Watkins scattered three hits to preserve the shutout.

It took three innings for Myrtle Beach to break through, but with one swing of the bat, Kevin Alcantara delivered the game-winning knock. Alcantara took a one-strike pitch with the bases loaded and ripped it for a bases-clearing double to put Myrtle Beach on top for good 3-0. Two innings later saw the Pelicans keep the pressure on with Pete Crow-Armstrong delivering an RBI single before Alcantara went deep for his fifth to make things 6-0.

The Pelicans capped off their scoring in the seventh inning with Alcantara adding an RBI groundout mixed with a Kevin Made sacrifice fly and remained hot with another win. Not only did Alcantara lead the way with three hits, but he led the team with a career-high six RBIs in the win.

Birds win their 10th in a row, their longest winning streak since 2016.#MBPelicans pic.twitter.com/tlpd3DoryN