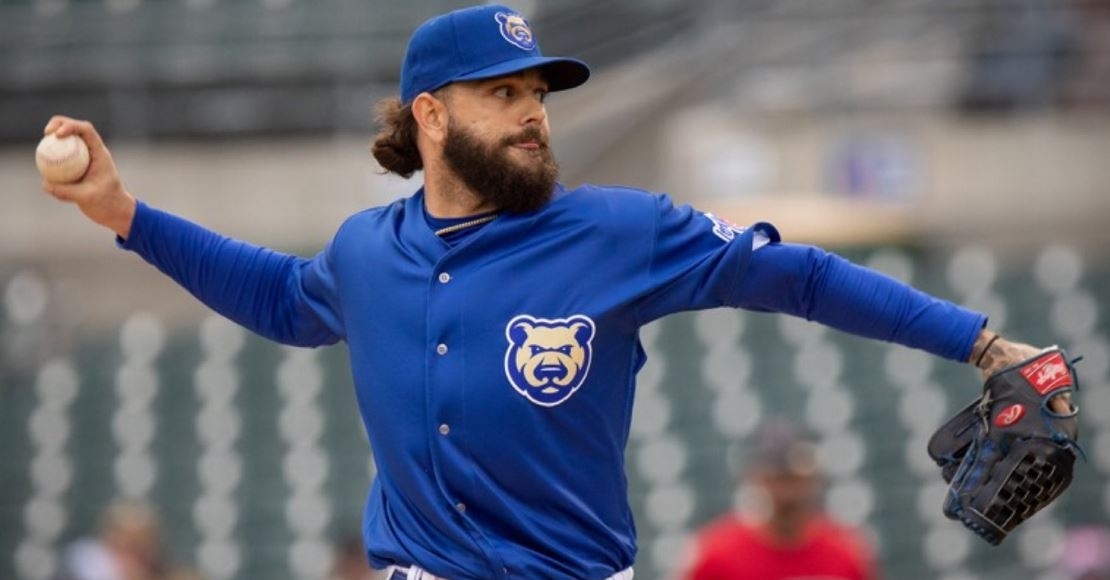 Thursday was a good night, but not a great night for the Cubs organization as they posted a 4-3 mark in Minor League play. The best news of the night came from Myrtle Beach as they used a massive comeback to top Kannapolis and clinched the Carolina League South Division title for the first half.

That means regardless of how things go in the second half, there will be playoff baseball of some sort within the Cubs organization. Don't let that fool you. This organization wants to do better, and several other teams have a shot at postseason play during the second half.

What started as a pitcher's duel all night tipped in Louisville's favor as the Bats scored all of their runs after the sixth inning. Give credit to Robert Gsellmen, who tossed five scoreless innings of two-hit ball to go with three strikeouts.

Unfortunately, the Bats had much better pitching as they allowed six hits while striking out 13 across the nine innings. Colin Moran delivered the game-winning blow in the seventh inning with an RBI double and then came home to score on the Stuart Fairchild single. Louisville would add another run in the eighth for insurance and won by a 3-0 score.

The Smokies picked a great week to start playing well again as they took down the Lookouts relatively easy on Thursday. Javier Assad continues to be the surprising ace of their staff, with his ERA falling to 2.57. Assad gave the Smokies 5 1/3 innings and allowed just one run while the offense did the rest of the work.

With Bryce Ball putting the Smokies on top for good in the second with a two-run shot, Assad could relax a little bit and pitch more to his game. Quincy McAfee pulled the Lookouts within 2-1 with his homer in the third, but that would be all Assad would allow on the day.

The bottom of the third saw Alexander Canario deliver the game-winning sacrifice fly before the Smokies offense went to work later. A fifth-inning homer from Yonathan Perlaza made things 5-1 before Cole Roederer capped off the scoring with an RBI single in the eighth. Perlaza has been on quite a groove lately and led the way with three hits.

Yonathan Perlaza goes 3-4 with 2RBI and a home run as the Smokies take down the Lookouts in Game 3! pic.twitter.com/uXb9YjnUJa

Extra extra read all about it as the Cubs and Chiefs treated the fans to some free baseball on Thursday. While most of the game was filled with back and forth action, a total of five runs were scored in the 10th, and four came from South Bend in the win.

Jordan Wicks got the ball and did not have a great outing as he failed to make it out of the second inning. That meant the Cubs offense would have to pick him up in a big way, especially once the bullpen started to get deeper.

Singles from Carlos Soto and Mike Antico not only put the Chiefs in front in the second, but saw them take a 3-0 lead with the Cubs offense coming to bat. Jake Washer made sure to keep things close as his two-run shot brought the Cubs within 3-2 and had things looking like an offensive explosion.

Soto added a sacrifice fly in the third to make things 4-2 before the L.J. Jones double in the fifth pushed the lead back to three at 5-2. From that moment on, it was all Cubs as they closed out the regulation side of things with three unanswered runs to force extras. A Jonathan Sierra in the sixth made things 5-3 before Pablo Aliendo tied things up with a single in the eighth.

Now in the 10th, it was Peoria striking first as Tyler Reichenborn picked up the go-ahead single. Down to their final three outs, the Cubs had a little magic left in the tank with Washer tying things up with an RBI double before Aliendo left the building for a walk-off 9-6 win.

SEE YA!@J_Wash10 got us on the board, and @pabloaliendo14 sent the South Bend faithful home happy on @hoosierlottery home runs tonight! We love walk-off ??'s on @WatchMarquee. ?? pic.twitter.com/VcW5LOp1lX

While Sierra led the way with four hits, Washer and Aliendo carried the offense as they drove in six runs. Everyone in the lineup, apart from Scott McKeon, had a hit.

An instant classic to end the first half of the season! pic.twitter.com/zzpHmrqnRD

If you are going to clinch the first half-title, why not do it in style? That is precisely what the Pelicans did as they trailed 6-1 entering the seventh before forcing extras to win. Considering that Charleston overcame their own deficit to deliver a walk-off win, all the pressure was on Myrtle Beach, and they did what they needed to do.

Luis Devers struggled to get guys out for the first time in a long time. Yes, he lasted six innings while striking out six, but he allowed six earned runs which isn't like him. All this happened after Ezequiel Pagan homered in the second to give the Pelicans a 1-0 lead, but things went south after that.

DJ Gladney tied things up with a homer in the bottom of the second before the Cannon Ballers took the lead courtesy of the Samil Polanco double and Victor Torres single. Two innings later, Gladney added his second homer of the game to extend the lead to 4-1 before watching Colson Montgomery make things 6-1 in the fifth.

Still trailing by that score in the seventh, Myrtle Beach began to rally as Josue Huma picked up an RBI single to make things 6-2 ahead of a Kevin Made sacrifice fly. One inning later saw the Pelicans come up clutch yet again with Felix Stevens going yard to make things 6-5 before Huma gave them a 7-6 lead with an RBI double.

Two-run homer makes it 6-5 Kannapolis in the top of the eighth. #MBPelicans pic.twitter.com/Jy0BV6u1AI

What was looking like the winning hit, Kannapolis, wouldn't go down without a fight as a costly wild pitch from Johzan Oquendo in the ninth allowed for the tying run to score. Fortunately for the Pelicans, they didn't let that bother them as great teams find ways to win. They did just that with Ethan Hearn picking up the game-winning fielder's choice as the Pelicans cemented their place in the playoffs.

Ezequiel Pagan scores on fielder’s choice and the Pelicans lead 8-7 heading to the bottom of the 10th! pic.twitter.com/sMwwepHlcP

Pagan and Huma had great nights at the plate, coming away with three hits. Huma had the better night with three RBIs and has seen his average reach the .260 range.

Josue Huma brings in two on a double.

Pelicans 7, Cannon Ballers 6 in the top of the eighth. pic.twitter.com/qmW2St3xT7

With the win, the Pelicans improved their record to 47-19, which is still tops in all Minor League baseball.

The lone rookie league team to win on Thursday was the ACL Cubs making quick work of the Diamondbacks. That win ensured the Cubs a winning mark on Thursday, which is all you can ask for.

All eyes were on 2020 fifth-round pick Koan Moreno who made his season debut. Although he allowed one run in one inning, his command was rusty as he walked four and struck out two. Thankfully for him, Cristian More put the Cubs up 2-0 in the first as they didn't look back. The Cubs added to their lead in the fourth, scoring four times off of three singles, with Moises Ballesteros, Cristian Hernandez, and Carlos Morfa getting in on the fun. An error led to the fourth run as the Cubs were up 6-1.

Leading 6-2 in the sixth, the Cubs capped off the scoring with Ballesteros picking up an RBI double with, Pedro Ramirez adding an RBI single to make things 8-2. Recently added to the organization's top 30 list, Ballesteros continues to hit as he delivered two hits with two RBIs. Hernandez, Ramirez, and Ismael Mena added multi-hit games in the win.

While the ACL Cubs did well, things were not as smooth in the DSL, with the DSL Blue team dropping one to the Twins. A large portion of that damage came after Diego Duarte exited the game as he allowed just one unearned run in four innings.

Tied 1-1 in the third, the Cubs managed to grab the lead with Jefferson Rojas stealing second and having Esmarly Tatis come home on a wild pitch. That lead lasted until the fifth when Jesus Peraza singled to make things 3-2. The Cubs managed to keep things close with Daniel Ferreira tying things up in the sixth before the Twins closed out the game with five unanswered runs, with Harold Grant picking up the game-winning hit. Tatis had two hits on the afternoon.

With a three-run inning providing the cushion, the Mets used strong pitching to do away with the Cubs. Melvyn Amador continues to pitch well as his ERA sits at 1.80 following a strong outing. Unfortunately, the same couldn't be said about the pen as they struggled to get outs.

Surprisingly, the Cubs drew first blood with Alexis Hernandez picking up an RBI groundout in the first. That score held until the third, when the Mets scored six times across the next four innings to take control. Their big inning came in the sixth when three runs came across, with Germain Noriega having the lone hit with an RBI triple.

The Cubs managed to pull within 6-2 on a Jose Escobar groundout in the eighth, but couldn't get any closer and fell by a 7-2 score. The Cubs had six hits in the game, with Carlos Ramos responsible for three.