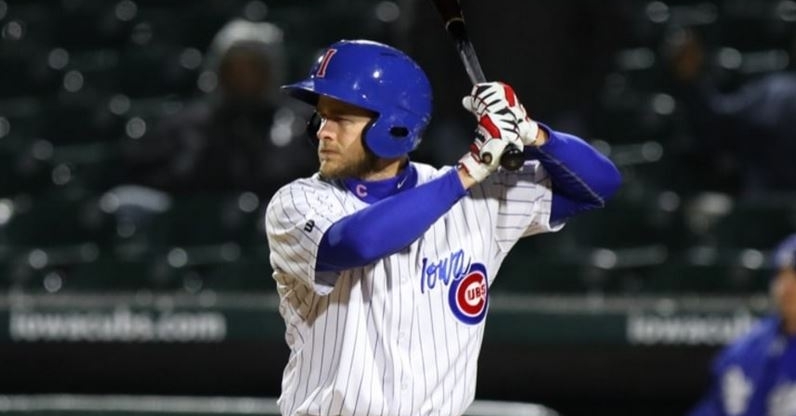 Dewess with the walk-off single in extras for the win

The Iowa Cubs may not want to leave home for the rest of the season as they improved to 4-1 at home this season. After a great start by Matt Dermody, who filled in for Mark Leiter Jr, it was up to the bullpen as Connor Menez, Cayne Ueckert, and Erich Uelmen did what they needed to do.

That allowed the Cubs offense to rally late as they walked off the Mud Hens in 10 innings. For as good as Dermody was, he allowed both of the Mud Hens runs, with one coming in the second and one in the third. Neither one came via the hit, but the Cubs still trailed 2-0.

Jared Young got the Cubs on the board with an RBI single in the bottom of the third, and it was 2-1 Toledo. That score would hold up for quite a while as the Toldeo bullpen was able to match Iowa pitch for pitch. That was until the eighth inning when Estaban Quiroz picked up the game-tying sacrifice fly, and this game was ticketed for extras.

The Cubs continued to do their thing in the 10th, with Young reaching on a fielders choice to put runners on the corners. Following the Brennen Davis punchout, Toledo was set up for a double play to potentially end the inning. Instead, it was Donnie Dewees cashing in with the walk-off single to lift Iowa to another win.

Donnie Dewees is your @EMCInsurance Player of the Game with this walk-off in extras! pic.twitter.com/h9Y6MmjKY7

Dewees had a great night as he led the Cubs with three hits. John Hicks and Young added two hits, with Davis picking up one.

Another day, another walk-off winner ???? pic.twitter.com/7MDAXpIvUl

After a lengthy rain delay left this game in question, the rain subsided, and both the Smokies and Biscuits treated fans to another great game won by Tennessee. Riley Thompson continues to be the talk of the town in Tennessee and further cemented his case on Saturday. In his second start of the season, Thompson allowed just one solo home run in three innings of work while striking out eight of the nine batters he faced. He set the tone as the Smokies pulled out a hard-fought win.

What helped Thompson was the Smokies offense, with Luis Vazquez putting the Smokies on top 1-0 with an RBI triple. That lead didn't last long, with Curtis Mead taking Thompson deep in the bottom of the first to tie things up 1-1. Not only was that the lone hit allowed by Thompson, but the only hit they would have until the seventh as Peyton Remy gave the Smokies 3 2/3 innings of great work himself.

With both pitching staffs settling in, Yonathan Perlaza put the Smokies in front for good as his RBI single in the fourth made things 2-1. Tennessee added to that lead in the seventh when Christopher Morel uncorked his first homer of the year to make things 4-1.

Despite being held in check for six innings, the Biscuits made things interesting in the seventh as a leadoff double by Kameron Misner had the offense in business. Following a pair of strikeouts, Remy walked Evan Edwards before allowing the Grant Witherspoon double to pull the Biscuits within 4-3.

One inning later saw the Smokies put an end to the scoring as they used a trio of walks and a hit by a pitch to push the lead to 5-3, with Harrison Wenson picking up the RBI. That would be all they would need offensively as Kyle Johnson closed things out for the win.

Things didn't go as planned for the Cubs on Saturday as they struggled to get much of anything going against Fort Wayne. Kohl Franklin made his second start of the season and continues to shake the rust off. He lasted just 2/3 of an inning and allowed two runs before turning things over to Joe Nahas Didier Vargas.

Those two runs allowed not only to come early, but they were more than enough for Fort Wayne as Jackson Wolf, Edwin Bencomo, and Ryan Och combined to allow just two hits while striking out 13 Cubs on the evening.

Not only was Franklin battling his command throughout the first inning, but that led to a bases-loaded walk and a Robert Hassell single to give Fort Wayne a 2-0 lead. Given how strong of pitching Fort Wayne had, those two runs were all they would need with the CUbs playing catchup from the start.

Another bases-loaded walk in the third gave the Tin Caps a 3-0 lead before the Jack Stronach homer in the fifth extended the lead to 5-0. Fort Wayne capped off the scoring in the bottom of the sixth when Justin Lopez picked up an RBI single as Fort Wayne continued to play the Cubs well.

With just two hits and a walk, the Cubs had next to nothing going for them offensively. Fabian Pertuz and Jake Washer had those hits, with Alexander Canario picking up the walk. Ed Howard and Owen Caissie combined to go hitless with four punchouts.

We'll hop into the series finale tomorrow at 1:05 in The Fort ?? pic.twitter.com/vMPDwDAFMl

This has been a series driven by pitching, but one with a flair for the dramatics, with the Pelicans, scoring two walk-off wins. Helped by a four-run third inning, the Pelicans managed to keep things close before picking up their third walk-off win of the series in the bottom of the ninth, 5-4.

Richard Gallardo was on the mound, and take away one rough inning, and his outing wasn't bad. Gallardo allowed four runs on five hits in 3 2/3 innings of work, but that was all the offense the Greenjackets could put together against the Myrtle Beach staff.

Three of Gallardo's runs allowed came in the first inning as he labored through that frame. Geraldo Quintero opened the scoring with a two-run triple before an Adam Zebrowski groundout later in the frame extending the lead to 3-0.

Augusta kept the pressure on in the third, with Brandon Mezquito adding an RBI single to make things 4-0. At this point in the game, everything shifted in a big way as Myrtle Beach got their offense going and pushed across four runs to tie things up.

That big inning started with a James Triantos RBI single before the Kevin Alcantara RBI triple pulled the Pelicans within 4-3. Alcantara would then trot home on a Peter Matt sacrifice fly as things were knotted up 4-4. Give the Pelicans bullpen a ton of credit as they withstood the early onslaught by Augusta and kept them scoreless across the final six innings.

Chase Watkins played a considerable role in that, striking out five in 3 1/3 innings of work, while Tyler Santana delivered two scoreless innings himself, allowing a pair of hits. Looking to cap off their comeback in the ninth, Yeison Santana got things started the right way as he led things off with a walk.

A few pitches later, it was Ezequiel Pagan cashing in with a single as the Pelicans had two men on and no outs. Two pitches later saw Triantos cap off the comeback as his second single of the night provided him with his second RBI and gave the Pelicans the 5-4 walk-off win. Triantos had two hits with his two RBIs, while Alcantara connected for three hits and two RBIs.