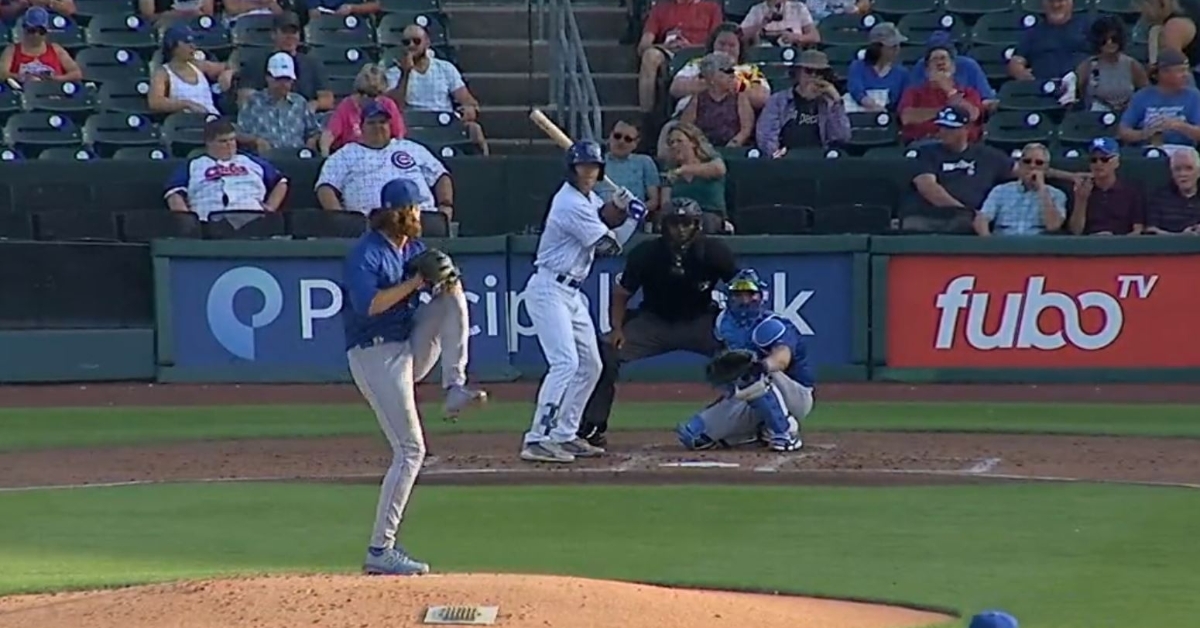 Young has been sizzling of late for the Iowa Cubs

Tuesday night had it all regarding the Cubs minor league system. Despite the organization posting just a 2-5 record, you had games led by pitching while other games were filled with offensive fireworks.

That type of action is all fans can ask for, and it was a fun night.

Home sweet home as the Iowa Cubs used the long ball to bring home cooking. With Cam Sanders doing his part with four scoreless frames on the mound, it made life a lot easier for the offense as they managed to bail out a terrible bullpen showing.

Iowa took the lead for good in the second as they saw three pitches and three homers come from those pitches, with Jared Young, Narciso Crook, and Greg Deichmann delivering the big flies for a quick 3-0 lead.

Iowa extended that lead to 6-0 in the second after Nelson Velazquez picked up an RBI groundout followed by Young double and Crook single.

The Cubs continued to keep the pressure on in the fifth, with Deichmann and Tyler Payne connecting for RBI doubles to make things 10-0. It took six innings for Omaha to crack the scoreboard, with Clay Dungan picking up an RBI double ahead of the Brewer Hicklen single. Hicklen would add a three-run shot later as part of a four-run eighth inning, but the Cubs built such a big lead that they cruised to the win.

Runs were tough to come by for the Smokies as Pensacola shut down the Smokies offense for the 3-0 win. Ryan Jensen started the game, giving Tennessee a pair of scoreless frames before handing things off to Dalton Stambaugh, who took the loss.

Despite an outstanding pitching performance of their own, A.J. Ladwig was too good as he tossed seven scoreless frames allowing seven hits and five strikeouts. The Troy Johnston homer in the fourth inning would be all the offense the Blue Wahoos would need as they took a 1-0 lead.

Norel Gonzalez would add some insurance in the seventh with an RBi single as that was all the runs needed in a 3-0 win. Chase Strumpf and Matt Mervis remained hot at the plate leading the way with two hits.

Not the result we were looking for in the Florida Panhandle. pic.twitter.com/4iRZ9lTIkb

Coming off a tough week last week, this was not the way South Bend wanted to start a new week as the River Bandits walked them off. DJ Herz continued his business on the mound, lowering his ERA to 2.09 after tossing three innings of one-run ball.

South Bend grabbed the lead in the third inning off the Fabian Pertuz RBI single, only to have the River Bandits tie things up in the bottom half of the inning with an RBI single of their own. One inning later saw Yohendrick Pinango and Owen Caissie connect for RBI singles as South Bend was back in front 3-1.

The River Bandits did a great job battling back, using a Juan Carlos Negret homer to pull within 3-2 before picking up an RBI groundout to tie things up. Looking for some late-game magic, Pinango picked off where he left earlier as his RBI single gave the Cubs a 4-3 lead.

However, the River Bandits got the last laugh as Dillan Shurm connected for an RBI single off Hunter Bigge to hand the River Bandits a walk-off 5-4 win. The top of the Cubs order was difficult to contain, with Jordan Nwogu, Yeison Santana, and Pinango having multi-hit efforts.

Tough finish to a strong effort tonight in Davenport. pic.twitter.com/uBVjK3kZ7j

You have to feel for the Carolina league whenever they play the Pelicans this season. Not only do they have to contain one of the more potent attacks in the league, but even when you keep them in check, they have the pitching that can lead them to a victory.

Luke Little continues to make his starts, but only gives the Cubs a few innings each time. Fortunately, you have a guy like Tyler Santana in the pen who tossed 5 1/3 scoreless frames to improve to 6-0. The only run the Pelicans would need came in the fourth when Felix Stevens picked up the game-winning RBI single. Myrtle Beach would add a late-game run off of an error for some huge insurance, but it was not needed in the win.

Sixth shutout of the year for the Birds.

Pelicans lead the south division by one game with the win.#MBPelicans pic.twitter.com/cwgLPIJgGV

Wins continue to be hard to come by for the ACL Cubs as the Brewers doubled them up on Tuesday. Ironically, all four of the Brewers runs came in the first two innings as the starting pitching on both sides was strong.

After Branlyn Jaraba put the Brewers on top 1-0 in the first via a sacrifice fly, the Cubs found themselves down 4-0 after a three-run second inning. Diego Larez and Luis Castillo collected the RBI hits in that inning as the Brewers offense was off and running.

Both Cubs runs came in one inning as Alejandro Rivero picked up a two-run single in the fourth to cut the deficit in half. Unfortunately, the offense was nowhere to be found the rest of the way as the Cubs lost by that 4-2 score. Moises Ballesteros remains red hot, collecting two more hits, while Cristian Hernandez suffered another hitless day.

Pitching was not the Cubs strong suit on Tuesday, as the staff allowed 12 runs to the Phillies' offense. Offensively, the Cubs offense managed to push across seven runs, but that wasn't enough to top the high-powered Phillies offense.

Most of the Cubs offense came in the first few innings, with five of their seven runs crossing home. Trailing 3-0 in the second, Offerman Hernandez pulled the Cubs within one with an RBI single before a wild pitch tied things up. With the Cubs handing the Phillies a run right back with a wild pitch in the third, Adan Sanchez gave the Cubs a 5-4 lead with an RBI single.

Apart from that, it was a long afternoon for the Cubs as the Phillies ripped off eight unanswered runs to seize control before winning 12-7. Sanchez led the way with two hits and two RBIs, while Erbin Jaque picked up two hits of his own.

The effort from the DSL clubs have been great thus far, but too bad the wins haven't translated. That was again the case for DSL Blue on Tuesday, as they gave it their all for 11 innings only to fall 6-5.

Yafrerlyn Vasquez gave the Cubs a nice outing on the mound as he got the start and lasted four innings. Vasquez was backed by some early run support that saw Geuri Lubo pick up a first-inning single to put the Cubs in front 1-0 before Albert Belliard made things 3-0 with a fourth-inning RBI single.

The Nationals not only moved within 3-2 following an RBI groundout and passed ball, but in the sixth, Dawry Martinez put the Nationals in front with an RBI triple. On the strength of the Early Tatis sacrifice fly, the Cubs managed to force extras, where Lubo singled again to put the Cubs back in front.

That lead was short-lived as the Nationals tied things up in the bottom of the 10th and then walked the Cubs off in the 11th, with Cristhian Vaquero picking up the game-winning RBI single. Lubo paced the offense with two hits and two RBIs.