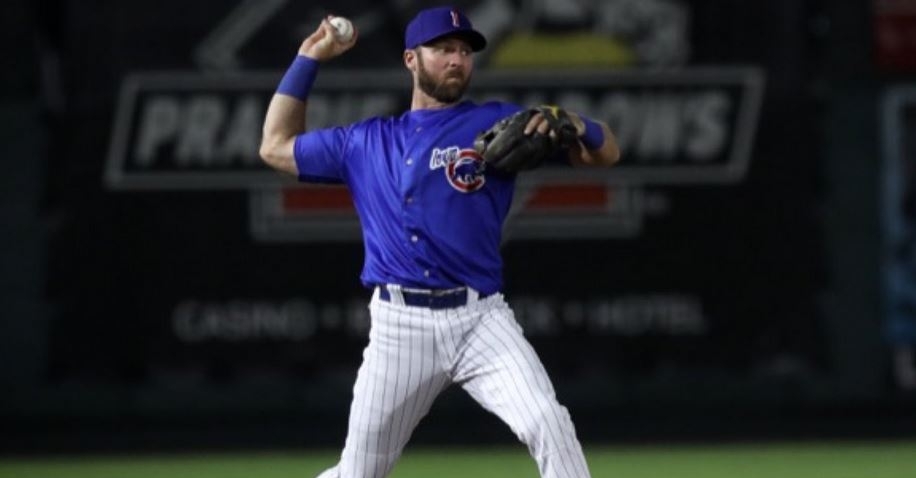 Romine had three hits in the loss (Photo via Iowa Cubs)

Like seasonal weather, with the days becoming shorter and shorter, days in minor league baseball are also getting shorter as just three days remain in the regular season. Friday also marked the final time this year where three games would be played across the system as DSL Red and DSL Blue will finish off their seasons against each other on Saturday.

As usual, wins haven't been coming as frequently as the organization would like posting a winless 0-3 mark on Friday. While two of those games were highly competitive, one was not as AAA suffers the most with the Cubs current injury status in the majors.

For the second time this season, Iowa has allowed 20 or more runs in a contest. Both of those cases came against the high-powered Storm Chasers, who love to hit their pitching. As the Cubs continue to go through injuries at the major league level, Iowa has been forced to send players their way, further depleting their roster over the final two weeks. That alone has made wins hard to come by, and the team has struggled for a while.

After going 4-0 with a 1.74 ERA across nine starts between the ACL Cubs and Myrtle Beach Pelicans, Luis Rodriguez made the jump to AAA to start for the pitching needy Cubs. Not knowing what to expect from the young kid, Rodriguez found out the hard way how difficult this Omaha offense is, allowing eight runs in two innings without a strikeout as that was the beginning of a long night ahead for the Cubs. Didier Vargas and Scott Kobos didn't fare much better combining to allow 12 runs in two innings of work while the rest of the pen was good.

Not only did Omaha score in the first five innings, but they pushed across 15 runs in the process scoring three or more runs in the first four innings. A Lucius Fox homer in the first opened the scoring for Omaha 1-0 before MJ Melendez extended the lead to 3-0 with an RBI double. One inning later saw a pair of homers do all the damage, with Angelo Castellanos going deep for a two-run shot while Edward Olivares connected for a three-run shot to make things 8-0.

In the third, another three-run inning for Omaha had them in front 11-0 before the Cubs finally got on the board. With the bases loaded and Brennen Davis at the plate, one swing could put the Cubs right back into things as he has been nothing short of impressive this season. Instead, Davis managed to ground out to the shortstop, but still pushed home a run making things 11-1 at that point.

A three-run Nick Dini homer in the fourth stretched the lead to 14-1 before Nick Pratto went deep for No. 20 in the fifth as Omaha was alive and well, leading 15-1. That lead continued to grow in the seventh courtesy of a second Olivares homer before six more runs in the eighth had Omaha in front 22-1. Four of those runs came off the grand slam by Dairon Blanco as the Cubs nightmare continued.

Iowa did manage to pick up three runs across the final two innings, with Caleb Knight picking up an RBI double in the eighth and Matt Mervis picking up an RBI single in the ninth, but it was nowhere near enough in a 22-4 loss. Things will be rough for Iowa the final two days, but don't tell that to Andrew Romine, who led the way with three hits. Mervis made his AAA debut and collected a pair of hits to go with an RBI, while Ian Miller, Levi Jordan, Knight, and Liam Spence all had hits.

With just two games remaining in their 2021 season, DSL Blue hasn't had a great year, but is playing better as of late. The Red Sox took that to heart and cooled off DSL Blue picking up a 5-2 win. Despite allowing three runs in three innings for his final start of 2021, Samuel Rodriguez had a great season posting a 2.63 ERA despite a 1-3 record.

Rodriguez allowed the games first run in the first off, and Alex Zapete single only to see Offerman Hernandez tie things up with a single of his own in the bottom of the second to pull the Cubs even 1-1. Not only did Rodriguez allow two more runs in the third off a Diego Viloria single, but those two runs proved to be the difference as the Red Sox held a 3-1 lead.

Just like in the second when the Cubs responded from the game's first run, Wally Soto took it upon himself in the bottom of the third to keep things close, connecting for an RBI double to make things 3-2. Unfortunately for the Cubs, that would be as close as they would get with an error leading to the Red Sox fourth run in the fourth before a Sebastian Guerra steal of home in the fifth capped off the scoring in the 5-2 Red Sox win.

Leonel Espinoza and Carlos Ramos led the offense with two hits in a quiet afternoon at the plate. Soto, Offerman Hernandez, and Lizardo Ruiz had the remaining hits.

Hoping to finish the season above .500, the DSL Red Cubs ran into a Cardinals team that has been tough on them this season, falling by an 8-4 score. That means DSL Red can finish .500 with a win on Saturday, which is impressive when you look at the start they got off to this season.

All eight of the Cardinals runs came in the first five innings, with most of that damage coming in the first. In that inning, the Cardinals had plenty of traffic on the bases as they were looking to strike early and often. A Samil De La Rosa single had the Cardinals on the board 1-0, but it was the bases-loaded triple by Jose Rodriguez that busted things open with the Cubs trailing 4-0 early.

Jose Herrera played a big part in the Cubs early offense, connecting for sacrifice flies in the second and fourth innings to have the Cubs within 5-2. However, a three-run fourth inning by the Cardinals took what was a close game and flipped it into a blowout as they built a commanding 8-2 and had the Cubs searching for answers.

Despite a Starlin Mateo single in the seventh and the Elias Fabian triple in the eighth, the Cubs offense couldn't recover from that deficit falling by a score of 8-4. Both Raino Coran and Andrews Cruz had great nights at the plate, collecting three hits as they accounted for six of the team's nine hits. Fabian, Mateo, and Samuel Duarte added the remaining hits, with Herrera leading the way with two RBIs.