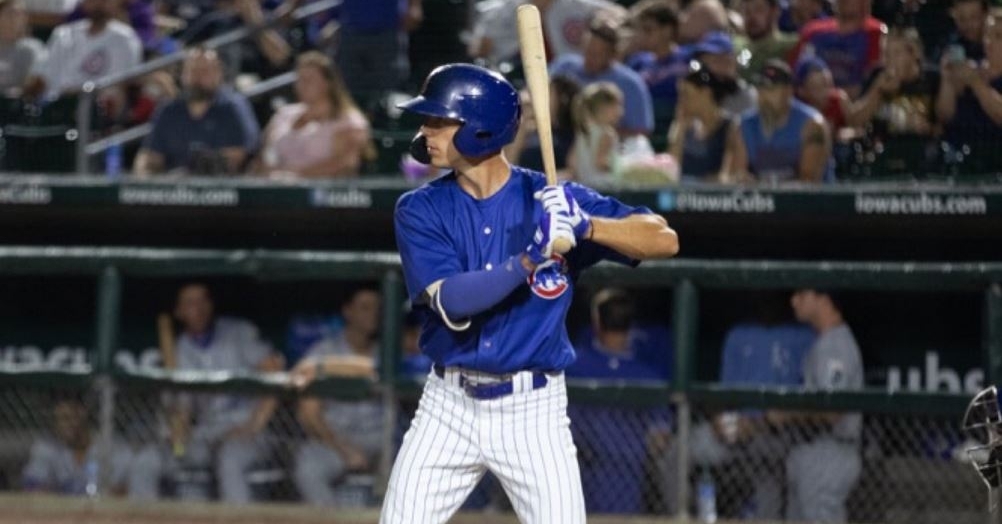 Even with less than stellar results on the diamond, Cubs fans will pay very close attention to what is happening in the minor leagues, at least from a player side of things. The talent level is there for a lot of these kids to make impacts, so watching their progress will be fun.

For the most part, Iowa played well against Buffalo this week, but the results were not there. Sunday saw them deliver their best pitching performance apart from their 1-0 loss, but the offense failed to deliver again. Cory Abbott was looking to bounce back from a rough first outing was Cory Abbott, and was much better this time out.

Abbott still lasted just 3 1/3 innings, but allowed just one run on one hit while striking out four. He gave way to Matt Swarmer, who pitched another 3 2/3 scoreless frames as he looks the part of a potential contributor this season. Opposing Abbott was Nick Allgeyer, who no-hit the Cubs through five innings last time.

In his second start against them this week, Allgeyer continued to silence their bats, allowing one run on two hits with seven strikeouts in 5 1/3 innings of work. He posted a 0.82 ERA against Iowa in two starts this series. Both starters allowed solo home runs for their only runs, with Vinny Capra putting Buffalo on top 1-0 in the fourth and Jared Young tying things up in the fifth.

After that, it became a battle of the bullpens, with both sides pitching equally well. That was until the eighth inning when Ben Leeper was called on. Coming off an incredible 2021 season that has put him in the top 30 conversations, Leeper was saddled with the loss as he allowed a Josh Palacios single in the eighth to bring home the winning run in the 2-1 defeat. The Cubs managed just three hits, with Brennen Davis and Ilderamo Vargas joining the Young homer.

Just not enough offense today. See you at Principal Park on Tuesday for our home opener! pic.twitter.com/ccjTMFBsvH

After being shut out in their first two games, the Chattanooga bats woke up in a big way coming away with nine runs in the victory. Riley Thompson made his first start in over a year and looked pretty good. In his three innings, the right-hander allowed two runs on two hits, but managed to strike out five with no walks.

He gave way to Peyton Remy, Bailey Lawson, and Burl Carraway, as that trio allowed seven runs in six innings for what was a rough afternoon for them. The same can not be said for the Lookouts bullpen, as they held the Smokies scoreless over the final five innings after falling in a big hole early.

For as good as Thompson was, the first inning was not kind to him as he allowed a solo homer to Mike Siani to put his team in a 1-0 hole. Later that inning, Robbie Tenerowicz picked up a sacrifice fly to double the lead, but Thompson was nearly untouchable.

Despite trailing for the first time all season, the Smokies wasted no time answering and came through in a big way. Bryce Ball got things started with an RBI double and then came home on the Chase Strumpf double to tie things up 2-2. One batter later, Nelson Maldonado came through as his two-run shot gave the Smokies a 4-2 lead.

Maldonado was just getting started as he added a second homer in the third inning to put the Cubs in front 5-2. Although the Smokies had a comfortable lead, it was the last run they would score, which doomed the Smokies in the end. The Lookouts pulled within one run in the fifth when James Free picked up an RBI groundout before a wild pitch pulled them within one.

Tenerowicz tied things up in the sixth with a sacrifice fly as the Lookouts offense started rolling. Eric Yang put the Lookouts on top for good in the seventh with a two-run double before adding two more runs in the eighth to secure the 9-5. Maldonado had a great day collecting three hits to lead the way with his two homers, with Christopher Morel adding two.

Nelson Maldonado goes 3-4 with 2HR & 3RBI, but the Smokies fall to Chattanooga in the series finale. pic.twitter.com/JlrNSn6NBW

Although his outing was good, Eduarniel Nunez and Joe Nahas did not pitch well as they allowed six earned runs to bury the Cubs in the end. While the Cubs pitching outside of Franklin struggled, you can't say the same for Tyson Guerrero Adrian Alacantara, who combined to allow two runs and 13 strikeouts.

Home runs continue to plaque the Cubs in the minors as Franklin allowed a solo home run to Tyler Gentry in the first, which gave the River Bandits the lead for good. That score held until the third when Herald Gonzalez delivered the game-winning hit with his three-run shot to put the River Bandits up 4-0.

It took five innings to get the Cubs on the board as Ed Howard punched through an RBI single to make things 4-1. That would be as close as the Cubs would get with Tyler Tolbert adding an RBI double in the sixth before the Gentry single as South Bend trailed 6-1 before falling behind 8-1. The Cubs added a late-game run on a passed ball, but that was it as they fell to Quad Cities 8-2.

Not only was Howard credited with the lone RBI, but he led the offense with two hits. Alexander Canario and Owen Caissie continue to struggle as they combined to go hitless with six punchouts.

Off day tomorrow then back to it in Fort Wayne on Tuesday! pic.twitter.com/x8MyMLYTVB

At long last, the Pelicans get in the win column, holding off a furious late-game Charleston rally to do so. Richard Gallardo was looking to build off his strong showing in 2021, who was impressive in his first start. The right-hander gave the Pelicans four innings of one-run ball to go with three strikeouts as he set the tone for the day.

That run allowed came in the first inning off the Gionti Turner groundout and saw the Pelicans trailing again. It was the only run that Gallardo would allow, but as usual, the Pelicans offense got off to a slow start and trailed until the third inning.

During that third inning, the bats got hot as they busted the game wide open. What started with a wild pitch to tie things up, ended with the Pelicans leading 5-1 as James Trianots delivered a sacrifice fly and the Felix Stevens homer. There was an error mixed in as Myrtle Beach could do no wrong that inning.

The Pelicans were at it again two innings later, with Jacob Wetzel cashing in with an RBI single before another wild pitch extended the lead to 7-1. At this moment, Charleston began to heat up as their comeback attempt was on.

That all started in the sixth inning when Willy Vazquez delivered an RBI triple and then scored on the Freddvil Chavez single to make things 7-3. That score held until the ninth, when Charleston wouldn't go away quietly. Anchored by Vazquez and Chavez again, the Riverdogs pushed across three ninth-inning runs to pull within 7-6. Fortunately for Myrtle Beach, they would hold them off and close things out for their first win.

Birds hang on to take the series finale!