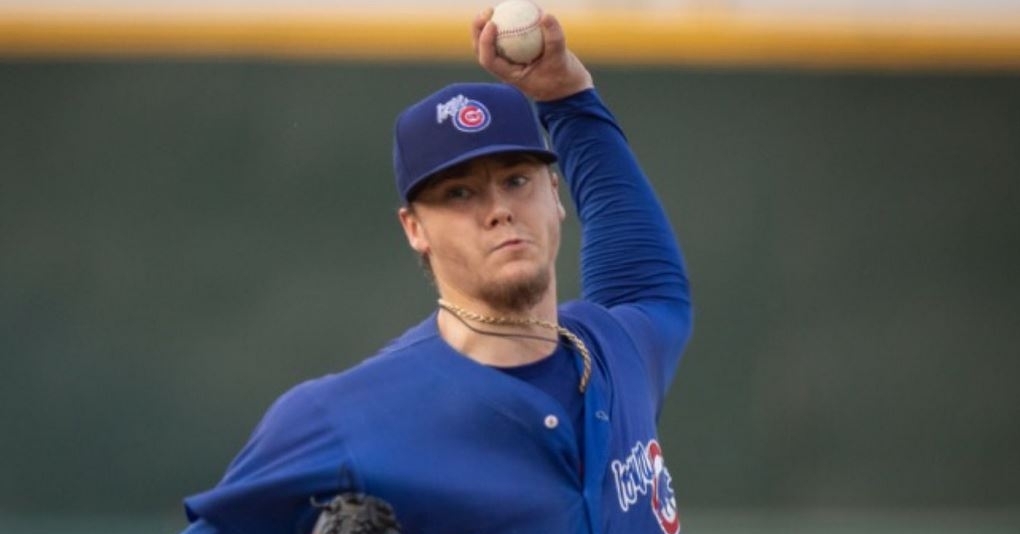 Despite just four teams in action on Wednesday, it was a jam-packed night as there were six games to be played. With two teams playing just one game, both Iowa and Tennessee had some double-dipping to do with both having to deal with doubleheaders.

For the most part, the Cubs saw a moderate amount of success posting a 3-2 record across the board. Record aside, this is the time of year when the system starts to change as several key cogs in the system have moved on to other organizations.

Of all the teams that had success on Wednesday, Iowa had the most success as they picked up a doubleheader sweep of the Indians. In game one, Justin Steele got the start as he continues to work his way towards the Northside as a starter. Steele was once again brilliant delivering five innings of one-run ball to go with eight punchouts and lowering his ERA to 1.32.

His lone run allowed came in the top of the fourth when Jared Oliva singled home the game's first run for the 1-0 lead. Steele then took it upon himself to help his own cause in the bottom of the fourth as his RBI single proved to be the game-winning hit in the Cubs 2-1 win. Steele was one of four players with one hit joining Trent Giambrone, Alfonso Rivas, and Trayce Thompson.

Game One: ?
Win One: ? pic.twitter.com/kvFbpfzvNt

Looking for the rare doubleheader sweep, the Cubs turned to Cory Abbott on the mound as he was looking for some positives. Abbott was impressive on one side of things striking out nine in just 4 2/3 innings of work, but he did allow four runs to take home another no-decision.

Knowing they needed some late-game offense if they wanted a win, the Cubs bats came to life in the bottom of the sixth, which was all started by a Thompson single that cut the deficit to 4-2. Rivas kept the line moving with a game-tying double later in the frame before the Nick Martini triple put the Cubs in front for good 6-4. Scott Effross earned the save to cap off the Double Header sweep.

The guys are away but we are prepping for their return! Buy your tickets now for our vintage bobblehead giveaway taking place next Sunday, 8/15! #SmokiesBaseball #GoSmokies
??? https://t.co/c09GDbqE4N pic.twitter.com/XBCTmjZaHw

After having their first game of a doubleheader postponed and rescheduled, the two sides took to the field later, hoping to get one game in. In the Smokies case, they might have wished they never played at all as the Biscuits pounded them 13-1.

When you see a score like that, you immediately look at Tennessee's pitching, which was an issue all night. However, it didn't start that way as the Smokies struck first in the second off the Nelson Velazquez single in his first AA game. Still holding that 1-0 lead in the fourth, Montgomery finally started to get things going offensively and pushed across 13 runs in the next four innings.

The first four came in the fourth inning when Seaver Whalen and Jonathan Aranda connected for two-run shots to give the Biscuits a 4-1 lead. Next inning, the same story as four more runs came across to score on a pair of two-run doubles from Whalen and Niko Hulsizer to put the Smokies in an 8-1 hole.

Down 9-1 after a Ford Proctor RBI triple in the sixth, the Biscuits kept the offensive barrage going with their third four-run frame in the seventh. This time, Austin Shenton got all four runs with one swing as his Grand Slam capped off a 13-1 loss.

After leading South Bend in most offensive categories, Velazquez made his AA debut and collected the lone RBI and one of the two Smokies hits. Carlos Sepulveda added the other one in what was a quiet night all around.

Recently acquired Anderson Espinoza got the start for South Bend on Wednesday, and the results were excellent. Although he lasted just three innings, Espinoza kept the damage to a minimum, surrendering just one run to go with four punchouts. Unfortunately for him, the Cubs offense struggled to make headway and fell to the Chiefs 5-2.

After keeping Peoria off the board for two innings, the Chiefs struck first in the third when Jordan Walker picked up an RBI single to give the Chiefs the 1-0 lead. That lead only continued to grow in the fourth as Chandler Redmond picked up a solo homer before the Tommy Jew single provided the Chiefs with the winning run leading 3-0. As if one Redmond homer wasn't tough enough to make up, why not make it two as he connected for his second homer in as many innings to put the Cubs in a 5-0 hole.

In desperate need of some offense, Harrison Wenson got the Cubs on the board with a fifth-inning sacrifice fly. Yonathan Perlaza and his ninth homer followed that in the seventh to pull within 5-2. Perlaza has been on a tear recently as he ran his hitting streak to 12 games in the losing effort.

Cubs bring the tying-run to the plate in the ninth but fall to Peoria to even the series. pic.twitter.com/CdjBhNXXR7

The Pelicans used one big inning early in the game to seize control and then did just enough to hold on for the win. Didier Vargas got the start and kept his team in the game by allowing three runs despite lasting just four innings. However, the story of the day on the mound was Tyler Suellentrop, as he not only delivered three shutout innings of relief, but did so while striking out six hitters. He now has a 1.15 ERA on the season.

After both teams posted zeroes in the first inning, the Pelicans got things rolling in the second, with Ethan Hearn putting the Pelicans in front for good with his two-run shot. Luis Verdugo added to that lead with an RBI double as the Pelicans led 3-0 after two. One inning later saw Columbia get on the board as Tyler Tolbert singled home the Fireflies first run.

One inning later saw Columbia pull even off a Saul Garza homer, and it was a brand-new game. That score held until the top of the sixth when Matt Mervis went deep for his ninth of the season, retaking the team lead in homers in the process. That homer proved to be the difference as Sullentrop joined forces with Danis Correa to lock down the win.

Mervis had a monster day at the plate, leading the offense with three hits to go with that homer. Ed Howard joined him with a multi-hit effort while Jonathan Sierra, Hearn, and Verdugo collected the remaining hits. Kevin Made and Jordan Nwogu suffered hitless nights.

Two more home runs tonight, this time they left the yard by a mile.

We take the first two games in Columbia. #MBPelicans pic.twitter.com/pbzIWqhYL7